A new book reminds us of the Brat Pack’s triviality. 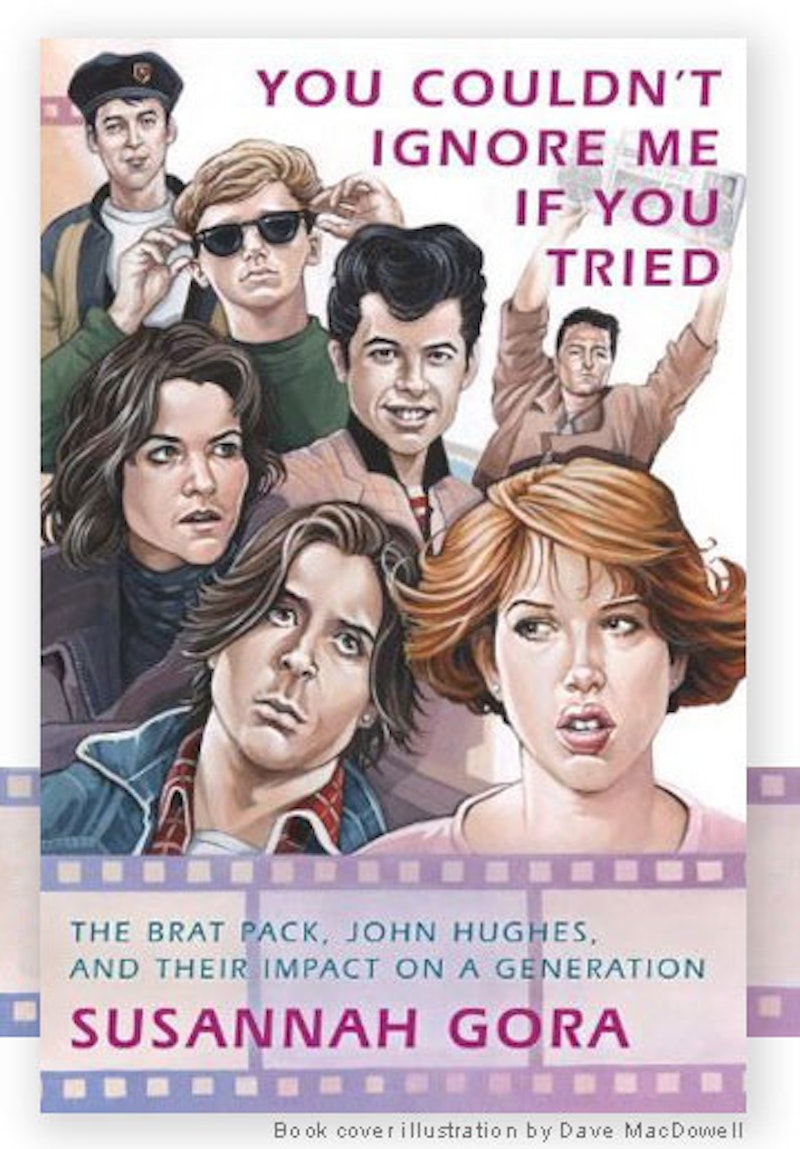 A pile of such sentences has been issued by Crown Publishers under the title You Couldn’t Ignore Me If You Tried. The pile is about the Brat Pack, with special reference to John Hughes and his films, and it has been heaped in place by Susannah Gora. She grew up watching the films on video (or possibly DVD) and kept the habit when she went to Duke and then to Premiere magazine. To put it gently, she takes these films more seriously than they deserve, and it’s clear from reading her why she would do so. She writes like someone who has a cardboard box in place of a sensibility.

Couldn’t Ignore Me is a Peter Biskind-style account of the behind-the-scenes anguish and romance of producing cinema classics. The effect here is dinky. No matter what happened when St. Elmo’s Fire was made, the results were a 13-year-old girl’s idea of adulthood. Of course, the culprit in this case was Joel Schumacher, and someone else is the focus of Gora’s book: “Clickety-clack. Clickety-clack. In the quiet Chicago suburb of Northbrook, Illinois, a young writer named John Hughes sat at his desk typing furiously.” But I’m also dubious about Pretty in Pink, and Some Kind of Wonderful is well meaning at best. Some of the teen comedies were good, and of this group some get chapters in Gora’s book. But the worst are treated like the best, and the make-pretend can get you down.

Yes, John Hughes was an auteur. Nobody else ever made a film like Sixteen Candles or The Breakfast Club. But as auteurs go, he was still a performing flea. Of the good teen films, the very good ones were about adulthood, because adulthood can show up even in the life of a child. The Hughes films weren’t like that. They blew up kids’ concerns to make them a replacement for adulthood—Duckie vs. Blaine, good God.

Take a look at Say Anything, Heathers or Fast Times at Ridgemont High and you see Hollywood doing a little more than you thought it could. Look at a Hughes film and you see John Hughes doing in his own particular way what Hollywood does most of the time, which is pander. A Hughes movie for teenagers will tell you that adults are all dead inside (“When you grow up, your heart dies”). A Hughes film for adults, such as Uncle Buck, will show you a lying, weasely, snot-nosed teenage boy who wants to get inside a sweet girl’s pants and therefore deserves to be tortured and humiliated. His films live in a very narrow world. The point of view is always that of someone too dumb to understand that he has a point of view.

So a writer who takes Hughes very seriously may be doomed to write a defective book. Gora did at least talk to a long list of relevant people, and it’s sweet that she’s on their side. “Later in the decade, though, Estevez found himself in a challenging period”—that’s a very nice way to describe an ex-star selling his autograph over the Internet. It’s good to learn what Mia Sara was like in high school (“I wasn’t cool at all”), and to confirm what you might have suspected, that about none of the Brat Packers went to a regular school and had a dad with a station wagon in the driveway. They were all the children of jazz musicians or actors or people blessed with a lot of money, and they went to private schools for students who were rich and/or funky.

—John Hughes saw Molly Ringwald in the film Tempest and was inspired to write Sixteen Candles with her picture hanging over his desk. She was 14, he was 33.

—Alan Ruck, the guy who played Ferris Bueller’s best friend, had to work in a Sears warehouse because he couldn’t get any acting jobs in the late 80s. (But later he got hired for Spin City.)

—Emilio Estevez and Judd Nelson went creeping around the corridors of their hotel to screw up breakfast orders when they were making The Breakfast Club. They thought it was funny.

—John Hughes became friends with Sloane Tanen, the daughter of studio executive Ned Tanen. Mainly they talked on the phone. Ned Tanen: “I’d say, ‘Does he want me?’ and she’d say, ‘No, he’s calling me!’” He was 35, she was 16.

—Lea Thompson was a nervous wreck because of the reviews for Howard the Duck. “I was shivering in my house,” she says. “It was horrible.” She had been set to become a superstar, and then bam.

—Andrew McCarthy started getting laid because of the Brat Pack films. “Frankly, that was the difference in my life. I was attractive to women when I was not attractive to them before. Which, for a 20-odd-year-old guy, is a great thing.” You know, I always liked him.

—John Hughes fired a film editor because the guy screened Hughes’ work-in-progress for a group of studio executives. The executives had flown to Chicago to see the film, Hughes didn’t show when he was supposed to, and after an hour the executives told the editor to start the screening. So he got fired. The film was Curly Sue.

—Emilio Estevez whined like a bitch when the guy who played the janitor in Breakfast Club made a joke about how the kids would give him a heart attack like Martin Sheen. The guy didn’t know Estevez was Sheen’s son.

—Come to think of it, John Hughes was such a dick that some studio wiseass told Spy magazine that when the hits stopped coming, “It’s going to be like the Oklahoma land rush in reverse—people will be running as fast as they can to get away from him.”

—Martha Coolidge, on being fired by Hughes as director of Some Kind of Wonderful, then had to greet the girl who had been hired to play Eric Stoltz’s kid sister. The girl was still a teenager and her mother had just died. Coolidge behaved beautifully. The actress remembers that she and her family found the director taking a poster off the wall of her ex-office. Tears were streaming down Coolidge’s face and, as the actress recalls, she said something like this: “Listen, I’m not going to be directing the film anymore. Don’t worry about anything. Obviously you guys know that life is more important than this. Good luck. You’re gonna be great, and good-bye.”