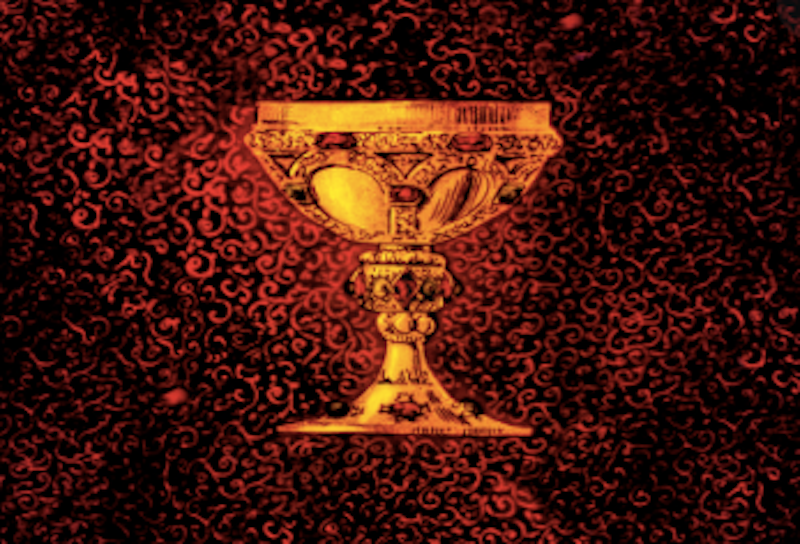 April 4, 2015. Therese went into the downtown NY Presbyterian hospital on Holy Saturday. We spent Easter Sunday in the ICU. Late Monday night she was transferred to the main uptown facility of NYP where she was diagnosed with later-stage cervical cancer. Given the circumstance of the holiday, the diagnosis will be forever tied to Easter weekend in my mind. In addition, there was a trail of blood that stretched from that first day to her last, which could be read as a convenient metaphor tying her suffering to Christian myth.

We were both non-believers, but we studied religious history and thought, while also entertaining an interest in the Celtic Grail mythology. The versions of this myth are many and varied. The 12th-century French poet, Robert de Boron, associated the grail with the Cup of the Last Supper that was later used by Joseph of Arimathea to collect the blood that flowed from the wound in Christ’s side. The theory behind the popular book, Holy Blood, Holy Grail (1982) posits that the grail symbolizes both the womb of Mary Magdalene and the bloodline of Christ. Better-known Celtic examples are certain legends of Arthur and his Knights and the many versions of Parsifal. In this latter legend the grail and the ceremony surrounding it become the means by which the wound of the Maimed King is healed and the wasteland is redeemed, restoring life and fertility. Later versions include Tennyson’s Idylls of the Kings, and T.S Eliot’s modernist poem, The Wasteland. We also have popular movies such as The Fisher King, Monty Python and the Holy Grail, The DaVinci Code, and on and on. The various strains of Grail tales merge, mutate and diverge, and whether it shows up as a stone, a saucer, a salver, a platter with a severed head on it, a basket, a bowl of blood, a chalice of wine, a communion wafer, or a plastic bedpan, in the larger sense it is a symbol of spiritual quest, divine grace, sacrifice and healing.

The “incurable wound” is a related symbol occurring in literature and myth. In modern times it has been used to refer to rabies, resistant strains of microbial or viral disease, and even long-running social conditions such as racism and class hatred. Going back to the ancients, the Iliad and the Aeneid are full of wounds that don’t heal and require some sort of divine intervention. In the Old Testament God spoke to the weeping prophet Jeremiah: “Your wound is incurable; your shattered pieces are beyond repair. There is no one to plead your case—no healing for your injury, no relief for your affliction.”  We might rightfully interpret such affliction as the existential condition of humanity—it is ever-present and unavoidable. The First Noble Truth of Buddhism states that life consists of suffering. Christ’s ordeal is both an example of this suffering and the cure for it—an act of compassion whereby one takes on the suffering of others as one’s own.

For both the Buddha and Christ, compassion is the only answer to humanity’s plight. The Buddha said: "Our sorrows and wounds are healed only when we touch them with compassion." In the Grail tales, The Maimed Fisher King suffers from an incurable wound that’s the result of his own moral weakness. The wound is aggravated by Parsifal’s lack of both interest and sympathy and is only healed when he’s able to ask the question that frees him from his own selfishness. In the tale of Tristan and Isolde, Tristan’s wound can only be healed by Isolde’s love. In Lolita, Humbert Humbert pleads with his reader, “The poison was in the wound and the wound would never heal.” Admittedly this is a perverse example, but we know what he’s asking for.

But let me return to that tragic Holy Saturday of 2015. It was cool and sunny. I’d been walking around the Lower East Side with a friend, complaining about how the world didn’t meet our expectations. I was ignoring my new flip cell phone, which would’ve been ringing if I’d bothered to turn it on. I arrived home about four that afternoon to find a half-dressed and terrified Therese holding a bloody towel. There were towels on the floor and red footprints between the bathroom and the bed. We got ourselves together and immediately headed to the downtown Presbyterian ER where we spent Easter weekend.

This was the beginning of a trial that went on for 30 months. The bleeding never really stopped, despite all the preventative measures: the barbaric packing procedures, cauterization, radiation, and chemo. There were Chinese teas, herbal supplements, sitz baths with essential oils, and topical applications of medical marijuana. From her diagnosis to her death, her body had become an open wound that could no longer mend itself, as evidenced by the blood stains on her clothes, underwear, blood in her diapers, blood in the bedpan, blood that dripped onto the hospital floor, blood in the urine bags that drained her occluded kidneys. Of course, they tried to replace it. She must’ve had dozens of units of blood in those years. They ran it in and it ran back out again, usually slowly, but sometimes quickly. During those long months, once it had become obvious that her time was limited, I knew I needed and wanted to be with her in her last moments as company and comfort, if either was possible. On Sept. 12thof 2017, at Calvary Hospital, the end of her suffering finally arrived.

Acute Pulmonary Edema is a condition that occurs when the tissues of the lungs fill with blood due to capillary failure. The patient drowns in it. When the heart is failing edema can be the result, and Therese’s heart had been weak for some time. Among the various ways to die, I’ve always feared that drowning had to be the worst, because the drowning person had to make the decision to take their last breath. For Therese there was no decision.

We were both well over 50, but were just children in that room. We might as well have been wounded on a dangerous untended playground or a battlefield where you never see the enemy. I don’t mean to be trite or to compare the ordeal with actual battlefield experience. Of course, one could say that the fourth floor of Calvary is a battlefield of sorts, or at least a battlefield infirmary in the war against cancer. At some point you realize you’re alone and no one is coming anymore. There are no more troops in scrubs coming to the rescue, no generals, no doctors, no teachers, no parents, no gods—no mirrors to look in for answers and no one around to field the questions that we were too afraid to ask, because the answer was something we had always known.

Therese’s suffering had ended, but here’s where the metaphor returns, because even with her passing, that incurable wound that she had been was not healed by death, rather, it was passed to me, to carry as an insistent memory, as a specter of profound guilt, and as a form of terrible knowledge.

Just as I couldn’t touch her in the later stages of her illness due to her pain, I too became untouchable in the aftermath. For months I felt as I’d been skinned, peeled down to my naked nerves and veins—an open wound walking through a world that seemed, if not openly hostile, then violently indifferent. After years of living in the artificial light of hospital hallways and hospice rooms, the light of natural day was harsh and stinging. The noise of the subway became intolerable. People seemed to speak nothing but nonsense. My sheets were like sandpaper. The world became an all-out attack on the integrity of my physical and mental being. I’d become, metaphorically, the bleeding one, though it was her blood, not mine, that I trailed behind me. In my anger I could feel people condemn it, as if they were somehow offended. How dare you bring your pain into our world, they seemed to say. But these were my thoughts, not theirs. I was angry and self-destructive. I projected that anger outward. But, to quote the Buddha: "You will not be punished for your anger; you will be punished by your anger." That’s certainly true.

Grief rewires the brain, and you might not regain the person you used to be. You feel guilty for surviving, as if survival were even possible. More likely you just become someone else—a better or worse person, or maybe no person at all. In a world dominated by absence, whoever you once were is sucked out by that vacuum, leaving a void inside that needs to be filled. If you’re lucky it’ll be filled with love. But it could easily be otherwise.

Even though I’m an atheist, I came to appreciate the deeper “spiritual” significance of suffering—that I needed to find some purpose for it, some path back to the living and the possibility of a future. And the red fog did begin to lift in time until I could see more clearly the people on the subway and the masses thronging through the streets on their way to their personal comedies and tragedies—all of them afflicted, all of them wounded in some way. And though we may try to avoid the infection that someone else’s pain might bring to us, that avoidance too often feeds the affliction.

One could say that compassion is, at root, selfish or merely survivalist and that’s probably true—mirror neurons, amygdala feedback loops, evolutionary altruism, etc. We see our own pain in the pain of others as a means of self-preservation. However, if we allow it, we can actually “see” others as well, both their humanity and our dependence on it. If suffering can make us see this bond, then we must let it, because suffering isn’t going to disappear from this life. To paraphrase the Swiss theologian Hans Urs von Balthasar: The wound we find at the heart of our world is finally incurable—yet we are necessarily driven to try! Simone Weil wrote: “The extreme greatness of Christianity lies in the fact that it does not seek a supernatural remedy for suffering, but a supernatural use for it.” This seems true to me.

Now we are in the Easter season again, confronted with a plague none of us were prepared for. We’re isolated both for practical and, one hopes, compassionate reasons. Social media has been breeding a kind of deadly isolation for some time, but because of this virus, our isolation is no longer something chosen, it’s required of us for the greater good. Still, if we no longer see each other physically, we must see each other emotionally. These days the only sounds we hear out our windows are the sirens of the ambulances rushing the sick to overburdened hospitals. We may feel we’re unable to relieve the fear, the pain, the anxiety of friends, family or even strangers, but like von Balthasar said, we have to try. That’s how we’ll survive. The crisis of this virus is going to get much worse in the days to come. We need to be watchful. To quote the Buddha yet again: “When watching after yourself, you watch after others. When watching after others, you watch after yourself.” I know this is what Therese would’ve wanted from me. After all, it’s the path she had always pointed out to me, and in this season of death and regeneration, it’s my challenge to honor it.