Always on the Sunnyside

Living alone for 38 years the concept of “social distancing” is not a problem for me. 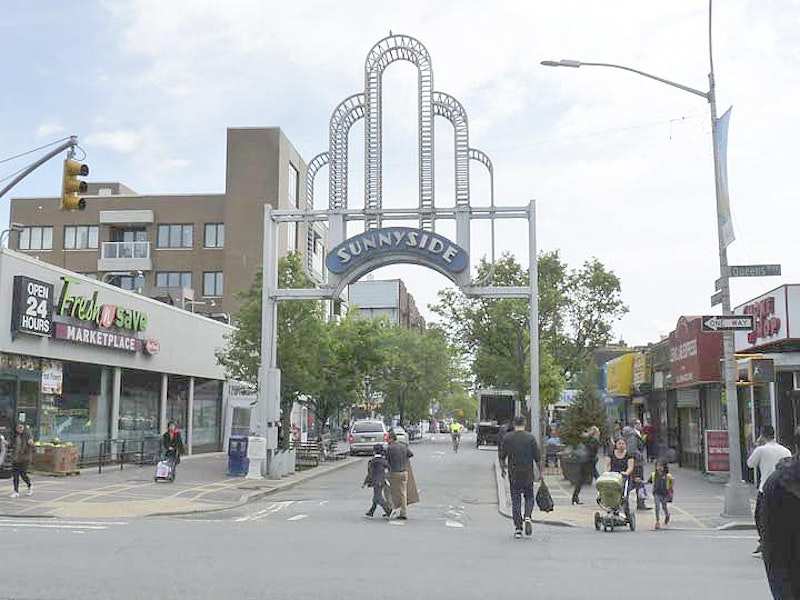 Back in mid-March, I walked from Woodside to Long Island City and back on a brilliant day, just as I’ve done on weekends for decades. I’d just about completed the walk, as the rumblings about social distancing to prevent spread of the coronavirus assumed a more urgent tone. Living alone for 38 years the concept of “social distancing” is not a problem for me. And except for cops and security guards occasionally mistaking me for a threat, the public largely believes that lone, unaccompanied older men wielding cameras are to be pretty much avoided, in any case.

On the way back to the train, I received a moderately urgent text from my pal Heather Quinlan, the filmmaker behind If These Knishes Could Talk, an examination of the NYC accent. She’s presently writing a book about infectious diseases, to which a chapter on the coronavirus has been added, and she told me to keep my well-known wanderings to a minimum. Even though I’m feeling well, I could be a carrier and spread it around. Since I’m cautious to a fault, I’ve stayed around the house since, excepting trips for food, blood pressure pills and walks to the nearby pond and woods (I’m in Little Neck, an Eli Manning pass from Nassau County).

True, I fear I will get it, and also fear what happens to my savings during and after all this. However, I have Forgotten New York, Splice Today, and occasional other outlets that get me out of bed in the morning. There’s plenty of research to be done, plenty of photos to process, plenty of articles to write. I have thousands of photos in backlog that will keep things going for the considerable future and for that, I’m thankful.

Returning to Sunnyside, midway between Woodside and Long Island City, above we see the Sunnyside Arch at Queens Blvd. and 46th St. The Arch needs no introduction for western Queens residents but I’ve always been fascinated by it. No other New York City neighborhood really has an artifact like it. It can be found on the short stretch of 46th St. between Queens Blvd. and Greenpoint Ave. The Arch was built in 1983 by a defunct community group and has had its fortunes rise and fall over the decades. Its last renovation, which has held up to date, was in 2011. 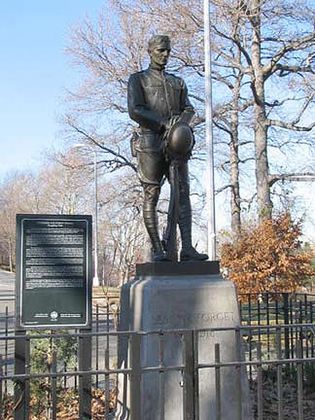 Originally titled “The Returning Soldier,” the statue in Doughboy Park, Woodside Ave. and 54th St., is perhaps better known for its pedestal inscription “Lest We Forget.”

In the aftermath of World War I, it was commissioned by an entity called the Woodside Community Council for $5000 and sculpted by Burt Johnson, who had studied with Earle Faser and Augustus Saint Gaudens. His WWI memorials also include the Flanders Field Memorial in Hells Kitchen’s DeWitt Clinton Park.

Even before the statue and Doughboy Park were dedicated in 1923, this was a designated “mustering ground” for departing soldiers en route to the war. The ceremony included music by St. Mary’s Military Band, a rendition of the “Star Spangled Banner” by the children of P.S. 11, and ministries from nearby St. Sebastian and St. Paul’s churches. Of course, many of the mustered soldiers didn’t return, or in much different condition from when they entered the war. 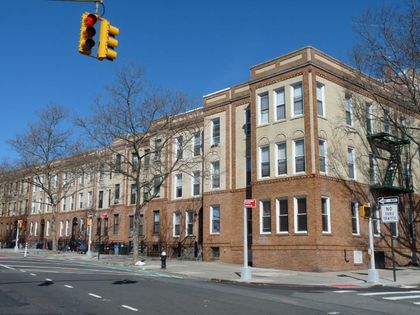 Heading north to Skillman Ave., we’re walking amidst one of the largest collections of Gustave X. Mathews apartments between 50th and 54th Sts. featuring yellow brick manufactured in Staten Island. Mathews built acres of such housing between 1915 and 1930 in Astoria, Woodside, Ridgewood and Elmhurst.

These Skillman Ave. units were produced for $8000 in 1915 by Gustave X. Mathews, who’s virtually unknown today but responsible for much classic residential architecture in Queens. The distinctive yellow bricks were produced in the kilns of Balthazar Kreischer’s brick works in the far reaches of Staten Island. (The Kreischer and Long Island City stalwarts, the Steinways, were linked by marriage.) By 1917, Mathews flats were in such demand that it’s said that if laid side by side the entire string of houses would reach 4.5 miles.

Mathews mass-produced these multi-unit houses for about $8000 and sold them for $11,000. They didn’t have central heating or hot water systems. The only heat came from coal in the stove and a kerosene heater in the living room. Despite this, the U.S. Government gave special recognition to Mathews’ concept in 1915 when an exhibit was opened at the Panama-Pacific Exposition in San Francisco. It showed the world how efficiently these type of apartments met housing needs for a surging population. 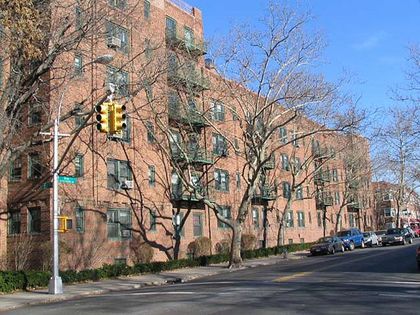 Steel tycoon Henry Phipps (1839-1930), a friend and partner of Andrew Carnegie, sold his interest in the Carnegie Company (later US Steel) to J.P. Morgan in 1901 for $50 million and created a series of public houses in NYC, model tenements that would remedy the rampant problems of disease in the cramped, airless buildings in NYC. 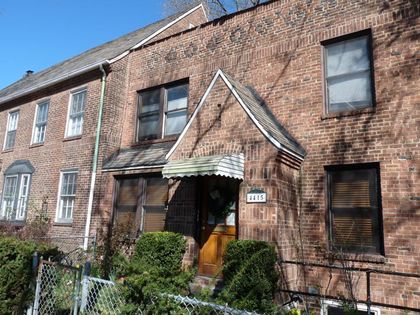 Yet another collection of distinctive houses is reached further west on Skillman, Sunnyside Gardens, one of whose buildings is shown here at 46th St.

The turn-of-the-century English Garden City movement of Sir Ebenezer Howard and Sir Raymond Unwin served as the inspiration for Sunnyside Gardens, built from 1924-1928. This housing experiment was aimed at showing civic leaders that they could solve social problems and beautify the city, all while making a small profit. The City Housing Corporation, whose founders were then-schoolteacher and future first lady Eleanor Roosevelt, ethicist Felix Adler, attorney and housing developer Alexander Bing, urban planner Lewis Mumford, architects Clarence S. Stein, Henry Wright, and Frederick Lee Ackerman and landscape architect Marjorie S. Cautley, was responsible for the project. Co-founder Lewis Mumford (the long-time architecture critic at The New Yorker) was also one of the Garden’s first residents. The part of Skillman Ave. that runs through Sunnyside Gardens has sub-named in his honor.

The design of the Gardens was novel in that large areas of open space were included in the plan. Construction costs were minimized, which allowed those with limited means to afford their own homes. Rows of one- to three-family private houses with co-op and rental apartment buildings were mixed together and arranged around common gardens, with stores and garages placed around the edges of the neighborhood. Just about every interior window in the Gardens offers a view of a landscaped commons. A typical price for a two-story attached brick house in the development cost $9500 in 1927.

I’d always admired the Gardens, but never lived here. I did, however, move into a smaller facsimile, Westmoreland Gardens in Little Neck in 2007.