An ode. A disclosure. 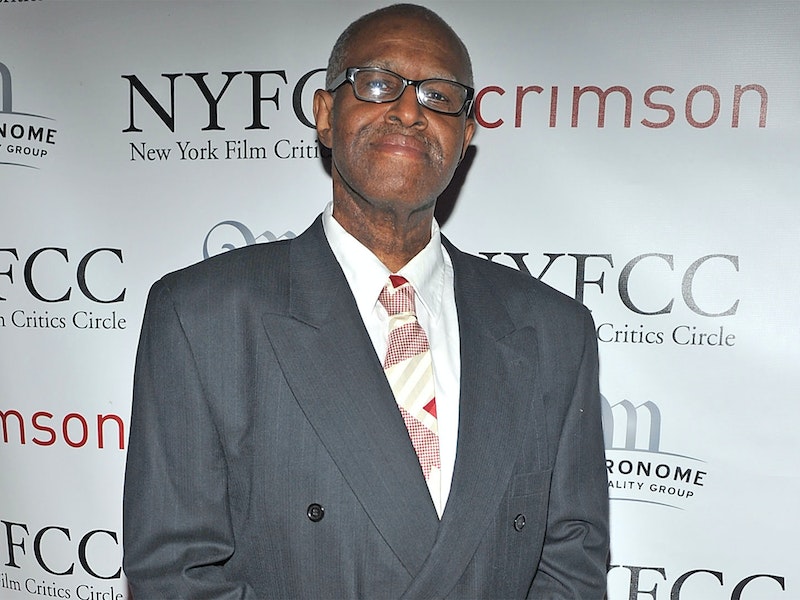 Sorry to Armond White. The greatest film critic of my lifetime; the only one I ever cared about. I’m sorry, Armond, for not writing the great profile of you that I always wanted to and that now I’m sure I never will. I wasted your time with that phone interview in, what was it... checking... January 2014.

They said you were a crank even when I first discovered you. The 1990s. But I knew different. Sure you could talk reckless—were alleged to have talked reckless—but that was a distraction from vital matters.

You wrote like you believed that human beings had souls, in their art at least. Like O’Hara’s poems were the better part of his heart. Other writers had opinions like assholes. You had ideas that were more than opinions, were... beliefs?... principles? Demands. I got it, on some level I always got it, the fundamental reason why the Knight Rider movie was sublime and humanistic while the one with the clever look, the people in recognizable sweaters sitting on familiar sofas talking about art was a kind of poison we couldn’t help but keep reaching for. Sometimes, though, it made me uneasy.

Eventually I figured out this much: it had to do with pandering, as serious a moral law as there is in art. Never pander. A more perfect union is what we are after here. The smartest art, if it makes us smaller, dehumanizes, betrays the promise of the Republic.

I’m not saying you, Armond, were always right. I only saw maybe 10 percent of the films you wrote about and that was in my peak picture-going years. This isn’t about that. This is about the genius of Armond White who believed that people had souls in their art and wrote like it.

I’m sorry Armond, I was going to rub it in their stupid faces, that empathetic genius of yours but it got away from me. Honestly, I’m sorry to myself too. Sorry to me. You owed it to yourself, man. The fuck is wrong with you?

DISCLOSURE: (sub-disclosure: this essay was originally intended for another publication. The following disclosure written for that publication addresses what would’ve been a conflict of interest had it been published there. In the event, the editor there never even responded to my repeated emails but the disclosure stands.) I know _______ from high school, cut days, nights, and weekends in Washington Square Park. So one time, when I was around 16 and he was 18 or so, we _______ some _______ and went up to Times Square. This was part of the thing where we thought hanging out in Times Square was cooler than hanging out downtown and being around our own people, in an unconscious Groucho Marx kind of way—as in: “Fuck the East Village for catering too much to me with its sensibility.” No, gimme the dumb inhuman enormity of 42nd St. in its gaudy but still seedy post-70s hangover pre-Disney phase. So what happened was we _______ the _______ and after wandering around the Forty-Deuce for a bit and—why do I remember this part?—eating free mini-cereal boxes, dry, no milk, because we got them on the street from a guy handing them out as part of a promotion. We ate the cereal and then we wound up in the Scientology building on 46th St. where we signed some forms to get free classes. Then a receptionist lady stuck us in a small dark basement room where 15 or so little black plastic folding chairs were set up in four or five rows under a low ceiling. A room like a dungeon. We sat down and the movie started and we watched it play on the screen.

Isn’t it weird how vividly I remember scenes from that Scientology movie? Vividly. And there are movies I thought I loved and I don’t remember a single thing about them. I don’t even know their names. The Scientology movie I remember. I remember there were priests, rabbis, Hindus, Catholics, bishops, filling up the frame and being welcoming on the screen in front of us. With flat authority, they calmly said Scientology was good, less emphatic even than Joe Torre talking about whether Andy Pettitte had the stuff that game, they were saying sure, don’t worry, Scientology is good for you, don’t worry it’s got the stuff. They said it in a way that made you feel safe in other words, they didn’t make it sound too good for you like blowjobs or salvation, just good in a solid way, soothed, like an A on a test, going to a job everyday that gives you security and a reasonable degree of satisfaction or signing the card that someone sends to sick people. And it was like your priest wouldn’t mind; your rabbi understood what you were doing there and was okay with it, hand on your shoulder telling you it’s okay you can be both, Jewish and a Scientologist. One’s a faith and the other is a blueprint for complete metaphysical mastery—mastery bordering on rape to be honest but why shouldn’t you have both?

You felt, “Okay,” like this was something Midwestern reverends approved of, not just coked-up LA actors and grim suburban strivers, the sociopathic background players in PKD novels, the kind who’d nonchalantly look around for an ashtray to put out their cigarette undisturbed except by the minor inconvenience of the misplaced ashtray while next to them on the couch someone they’d known for years was asphyxiating. The life is going out of that man, my close friend, how interesting, now where is that ashtray—is how those psychos thought; the kind of people you assumed went for this sort of thing. No, no, no, not just for those types the movie was saying—the soul suckers—but for Midwestern reverends, and kindly urban fireman, and for you, too.

Or you could not choose Scientology… and then it all sped terribly up. Flames jumped, licked up the gray steel walls of the small room getting smaller around you, the music got discordant, an unseen hand wheeled a piano off a cliff, CRASH, a puff of earth, the magnified claw of a feral cat scratched a baby’s cornea, old people shit themselves in public, it sped up, it sped up. Someone opened their mouth to speak but it just kept opening until the jaw unhinged and the camera moved in knocking teeth out as it forced the way down the throat. He looked kind of like you actually, the guy with his mouth cracked open and the camera forced down his throat. You opened your eyes again and it was the raw red inner walls of the meat body covered in larvae black cancer buzzing with… YOU COULD NOT CHOOSE SCIENTOLOGY.

Other than the movie there are two other things that I remembered happened while we were there. _______ and I took turns opening the one small door inside the tiny movie theater room, to the left of the back row if you were facing the screen beneath the white portal of projected light. It opened into a mechanical room; fuse box and whatnot. And then at some point we started snooping around to find the ORG’s dark secrets and we found a signed Isaac Hayes poster in a hallway. At some point we must’ve left but I don’t remember anything else from that day.

Let me say a few things about film critic Armond White. When I started writing this I was scared to check whether he had endorsed Donald J Trump for president. Bernie I could see (or Cruz actually) but not Clinton.

Let me say this about Armond White. Just read his review of Mr. 3000, the best movie Bernie Mac ever made. That review has more light and fidelity than all the high def films made in the last 30 years projected all at once onto a sheet of pure white snow.

When the emperor had no clothes Armond said it. Let anyone who calls him a troll be put to that test. When the emperor had no clothes what did they say? When that shit movie Mystic River came out, the worst film of Eastwood’s otherwise fine career, that bathetic blue gray wash of cinematic pander, only Armond said so. The New York Times said Sean Penn’s performance, which was actually like one of those precooked hams… no, was like the goo one of those hams comes swimming in—was the greatest feat of acting ever. Had transformed acting in fact. And the actress Laura Linney, with that ridiculous Boston accent, she got praised too as if she’d performed some transubstantiation. That actress doing her Southie lady Macbeth number. Southie people where white people are white. People.

What did the rest of them do when they were fed shit, the critics, did they just eat it? No, that wasn’t enough. The rest of them said: this is great art while they buried their noses in shit. Southie bathos bullshit. It was no The Friends of Eddie Coyle.

Here, this is what Armond White wrote about that stinking dishonest movie, with its self-serving myths about the working class, back in 2003:

The acclaim for Mystic River indicates a delusion of the mainstream media that it really cares about the common person. (Neil Young lays waste to this privileged notion in his difficult, remarkable new album Greendale-a politicized fictionalization of American community that exposes Mystic River's dishonest sociology.) It's almost-though not quite-funny to see all these famous people looking hard and flattening their vowels. (This may be the pastiest-looking Caucasian cast in Hollywood history). The ethnic put-on is part of a spurious realism. There is errant dialogue against yuppie gentrification; every character lives in an underlit home. Robbins reveals Dave's dementia in a living room so dark he could be developing photographs. No doubt this is Eastwood's visual metaphor for the benighted lower class. I'm relieved that he goes lightly on Boston racism. It allows Laurence Fishburne's laid-back performance as Sean's black cop partner Whitey Powers (ha ha) to be the film's best (he stops sullen Jimmy with a look that says "I got your number.") But at the same time, Eastwood's ease with the racism and violence of these ethnic types is itself a problem.

“It's time filmmakers stop tolerating racist characters as if relaying a greater, ugly truth-it's a greater lie, a greater ignorance. To suggest that racism and violence are natural to the working class is part of the subtle condescension of Hollywood fortunates who pretend to look back. Actors like playing these gross types; it's a sanctimonious form of hamminess. Eastwood can't do it himself, but as director he indulges his cast, especially Sean Penn. Jimmy is what we now think of as a Harvey Keitel role; Penn nails a younger version. Penn has frequently used his unrefined features to evoke the brutality of common men, and when he lets out an anguished squeal (here and in Hurlyburly) the hint of spoiled adolescence can be uniquely poignant. But Eastwood too often keeps you aware of these acting moments by slowly zooming in to Penn whenever he's about to burst a blood vessel, or giving him picturesque close-ups. Detached from the regular dramatic space, Penn's performance is actually less amazing than it was in I Am Sam (which was a less sentimental movie).

That reads funny now doesn’t it? I started writing this and couldn’t quite check whether Armond backed Trump. Everything is always so nervous now. A cold sweat, cartoon beads of it, rivulets on your cartoon forehead inside the cartoon thought bubble of your dread. How perfect is the line, “every character lives in an underlit home?” Perfect.