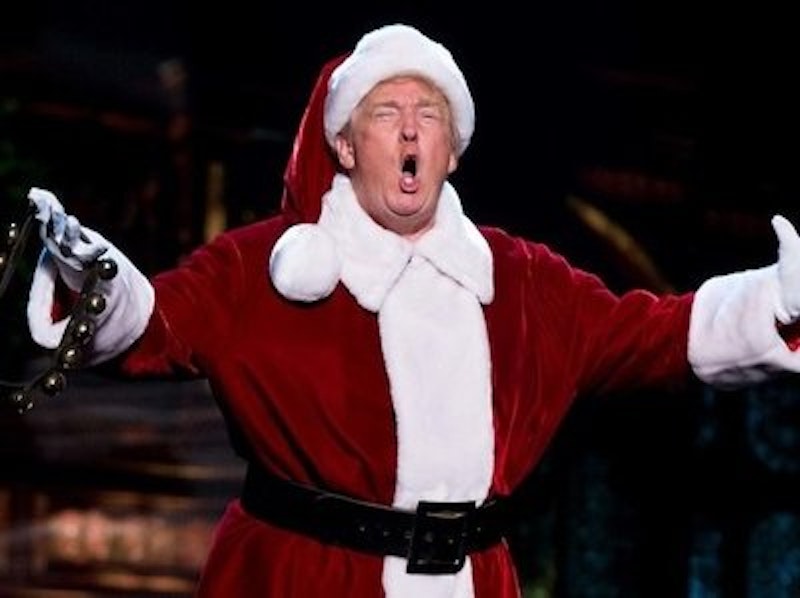 ‘Twas the night before Christmas, when all through the nation

Americans were dreaming of a carefree vacation.

Their Amazon wish lists were chosen with care,

In hopes that @SantaClausOfficial soon would be there.

Kids were on iPads, pretending to be in bed,

Ensuring their Farmville crops were all fed.

Dad in his slippers, all wet from the snow,

Was flipping through channels to find HBO.

Out in the yard I heard much commotion

My kids were outside—I shivered at the notion.

In the night air, my husband’s voice sounded,

“Get back to bed, or you’ll all be grounded!”

The moon shone down on the new fallen snow,

Giving sickening light to the terror below.

Not reindeer, no sleigh, but a gold-plated limo.

It skidded to a stop, ruined my Christmas display,

And from the limo peeked an orange toupee.

Slowly and lazily he stomped out a cigar,

And yelled—“Melania, Ivanka, get out of the car!”

He looked at the sky, smiling a Grinch’s smile,

“Old Santy Claus, he won’t be back for a while!

And make the North Pole pay for it all!”

From the trunk they brought a great lump,

And tried to place it in the tiny hands of Trump.

Not toys, not games, but a big old coal chunk

I thought that he saw me, and my heart nearly sunk.

But no, he glared at the coal, and I heard a loud crack!

As it broke into pieces, then was thrown in a sack.

He walked toward the window, let out a sigh,

Through his orange hair he drew a comb,

And said, “I believe this is the McCarthy home.

“Not that it matters—for I have no soul,

this year, every boy and girl is getting coal!

Coal in stockings, coal under the tree,

This is what you all get for electing me!”

His eyes, how ice-like! His face, how fat!

His hair how horrid, as down in the limo he sat.

He looked down at the now blackened snow,

He yelled to the driver and slammed the car door,

The limo flew off, snow thrown in a sheet,

And old Trump sat back and sent out a Tweet.

“Enjoy all your presents, all you girls and boys,

When they’re made in America, perhaps you’ll get toys!

But for now, I’ll give you one more thing to hate,