A Tale of Two Panelists

Do all white and black people look alike? 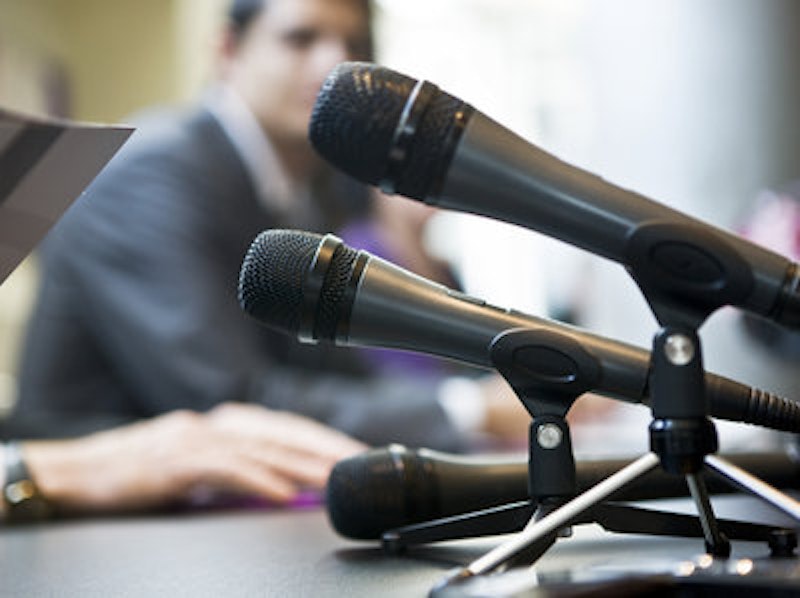 In professional wrestling, the two combatants—one the hero, the other the villain—are known respectively as the face and the heel. On a recent morning in New York State, amid the changing colors of the season, a professor of English, a white Jewish male, drove from his college of 2000 students to a neighboring one of similar size to appear on a panel in the role of the heel. Though a man of the Left, he held the view that political correctness stifles thought by virtue of the Will’s capacity for denial. This was the gripe he brought to the panel, whose three other members were sisters-in-arms whose rallying cry was “inclusiveness.” On the stage, from left to right, the three made a rainbow: black, brown, and white. To the left of the women sat their opponent, lined and gray, the lone senior, at 74 old enough to be the granddad of two of the panelists. Given his age, race, and sex, as compared to those of his co-discussants, the professor of English, to many in the audience, which consisted of mostly undergraduates, perhaps already embodied the heel before he even opened his mouth.

The rising American poet C— R—, the one black person sitting on the panel and herself an esteemed professor of English, was the featured attraction—the “face” if you will—whose name drew thunderous applause when announced. Striding to the podium with her coat still on and her shoulders draped in a brown silk scarf, she began by addressing a gentleman in the audience, the heel from the previous panel on the program, who’d likened the rhetoric of diversity in the West with that of right-wing populism. He now sat helplessly squirming in his seat as the poet took issue with one of his comments, staring down on his white bald head and leaving him no opportunity to respond. Instead, she proceeded to read from her work, devoting most of her breath to C—, her highly-acclaimed book of the moment in step with the Black Lives Matter movement. The book, in one vignette after the other, in prose or verse as the case may be, explores a variety of micro-aggressions inflicted routinely on blacks by whites, with the poet herself, or someone like her, standing in for black experience. In one such tale, the first in the book, and the first one read aloud by the poet, she flashes back to a time in school when a white girl who sits behind her in class, in what is clearly meant as a compliment, describes her as smelling more like a white person. The future poet assumes this tribute is offered in payment for services rendered: by leaning to her right, she allows the white girl to copy her answers during exams.

The one white sister-in-arms on the panel was the teacher of a course called Movement for Black Lives. This teacher followed the poet at the mike, taking it over for only five minutes, unlike her predecessor, who had it for 30. She looked to the famous poet for guidance, with her last words literally turned and looked at the stately figure seated behind her. “I’m interested to hear your perspective,” she said, catching the eye of the revered woman, “on how in your work with the ‘racial imaginary’ that you’ve recently spoken about—how can the ‘racial imaginary’ move historically white colleges and universities toward greater responsibility for creating anti-racist, anti-classist, and anti-sexist environments?”

The question had to be put on hold, as it was not the poet’s turn to speak. Instead, it was the turn of the white Jewish male, who sprang to his feet at a nod from the host. Silence greeted the announcement of his name as he settled in behind the podium and began to read his prepared remarks in a thick Jewish New York accent. He was there to consider the merits of C— and at first he waxed polite about it, calling the book “a very original work of cultural criticism.” He even made mention of his plans as a teacher to assign the book in one of his courses. This had to go down well with the poet, along with her two younger sisters-in-arms.

But then the professor, the pleasantries over, dropped a remark that rattled the teacups. He was “troubled,” he said, by the thrust of the book to treat all thorny issues as settled. “The anecdotes in C— are selected not for the way they open up difficult questions,” continued the professor, “but for the way they confirm, again and again, what is felt to be indisputable.” By way of example, he cited the poet’s story of a white friend of hers who absently calls her by the name of her black housekeeper. The poet suffers this “slippage” in silence, and is left to ponder the inevitable question: do all black people look alike to her friend? The professor found this far too pat, and the major failing of the book as a whole. We are not here simply to affirm what everyone should know, he said in summation. “We are also here to ask whether there is not in certain precincts of the culture an effort to forbid or to inhibit controversy, so that our little worlds will seem entirely safe.”

When the grande dame finally returned to the podium, still in her scarf and full-length coat, like a guest who can only stay for a minute, she glanced behind her in the direction of the professor and began at once, with the utmost civility, to counter the gentleman’s critique of her work. The professor listened politely from his seat, but as she was speaking a funny thing happened. While turned to face him, while looking right at him, she addressed him by name, calling him Roger—or at least, to those in the front rows of the hall, what sounded like Roger from where they were sitting; it was somewhat hard to tell at first, as her face was slightly turned from the mic.

But no, their ears had not deceived them, as was soon made clear when they heard the poet reference something “Roger” had said, this time uttered directly into the mike. This was somewhat jarring, and extremely awkward, as the gentleman’s given name was Robert, if one could believe the program notes and the conference host who introduced him. It was he, the host, whose name was Roger. Roger the host, like Robert the guest, was a white, bespectacled, Jewish male, the two men sitting like bookends onstage, one on either side of the women.

Two more times, four in total, the famous poet got it wrong, calling Robert by the name of their host. For his part, Robert, each time it happened, thought about cutting in to correct her while hastening to assure her in the very same breath that he had no objection to her calling him Roger; that it was just the sort of casual slippage he’d cited earlier in one of her stories, and no, he didn’t think she believed that all white people look alike.

If he managed to hold his tongue in the end, it was out of respect for the poet’s feelings. He had no wish to show her up in front of her legions of adoring fans; he was not so dirty a heel as all that. Through it all he smiled stoically and sought the eyes of his devoted wife, who’d made the trip down with him and was sitting in the third row. He looked uncomfortable in his endmost chair, but no more so than the actual Roger, who was dressed for the occasion in a pale khaki suit and a plump silk bowtie sprouting from his collar. This bowtie seemed to grow more cockeyed with each mis-saying of his name by the poet, until by the end it resembled a propeller whose blades have come to rest at a diagonal. A smile of chagrin was pasted on his face, and while the poet was making her case, he appealed with his eyes to the house at large as if to say, “Somebody help me.”

And then it was over; the lights went up. The panelists stood, and while they lingered, some 15-20 members of the audience, many holding copies of C—, reverently filed up onstage to have their books signed by their hero. It’s fair to say no one expected what was about to happen. At the front of this mostly adoring line were two elderly white women who told the poet in plain words, with the victim standing by, that she’d gotten Robert’s name wrong and she owed him an apology.

Though Robert moved quickly to assure all parties that no apologies were expected or required, that it wasn’t a big deal, just a casual slip, the poet was stunned by this news of her blunder, and, laying a hand on Robert’s arm, begged his pardon for her breach of manners—“Of course I know you’re not Roger,” she said. “He’s Roger and you’re Robert—Bob,” she added familiarly.

Really, said Robert, it’s perfectly fine, at which point the two women broke out afresh, insisting no, it was not fine at all; that she owed him a genuine apology, given her feelings about these slips.

“Let’s just back off this and let our kind friend sign the books for these young people before she has to leave,” Robert said. His tone was firm, and slightly scolding, but he could have kissed the two old women.