I Talk to Myself

And there’s nothing you can do about it. 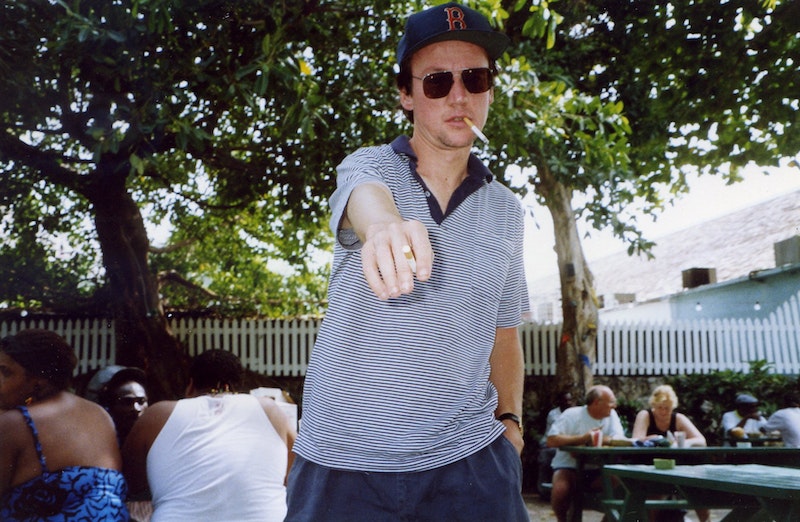 A few days ago, caught in the rain and a wind that blew my umbrella inside out, I was attempting to hail a cab—difficult under these conditions even in taxi-friendly Baltimore—and a block above North Ave. I had to stop. A middle-aged woman was yakking furiously about her plans for the evening, and it was entertaining. I enjoy when people talk to themselves, especially loudly, and it doesn’t matter whether they’re hobos, construction workers or stray pedestrians toting bags of groceries. Too bad for me: turned out the lady was talking on a cell phone and I resumed looking for cabbies, through rain-splattered specs, who might bring me home. The cell phone has really screwed up my concentration on the street—not to mention users clogging up thoroughfares by walking like turtles.

Not coincidentally, I often talk to myself, whether it’s at home or on the road. I also yell at the TV, especially in the morning, when emerging from the shower and The Today Show is on, and Al Roker, Willie Geist or Natalie Morales makes some inane comment about a celebrity, or a popular tweet, and I say “Shut up, Willie, no one cares!” It cracks my wife up. The commercials too: especially the local ones for ambulance-chaser lawyers (with the exception of my favorite, Barry Glazer), as if anyone in their right mind would hire an attorney who’s begging for business on the tube. And there’s Empire, whose jingle I sing along with, the phone number and the closing two words: “Empire. Today.” Funny thing, until yesterday I had no idea what Empire was selling (had to look it up); turns out it’s carpets, but that’s not very effective advertising.

Sometimes I engage the talkers, making two-minute friends, but usually they’re in their own world and have no truck for strangers. Fair enough. One time, in 1986 or so, I was in a very foul mood—as I recall a Baltimore City Paper writer had called that morning reneging on an assigned story—while walking from my Greenmount Ave. apartment to the office on a Saturday morning. I couldn’t shut up, even while buying some homemade cookies at the Waverly Market for a buddy’s little kids. I kept up the patter winding through Charles Village, and a self-appointed Good Samaritan—in reality a busybody—stopped me, with furrowed brow, to ask if everything was all right, wondering if I needed medical attention. “Get lost, asshole,” I replied, “I’m just having a conversation with myself!” Guess I was lucky one of those men with those big old nets wasn’t around to corral me.

Several years earlier, in the fall of ’77, at my Howard St. apartment, which was the temporary headquarters of the fledgling City Squeeze (later, when sense was restored, the City Paper) my business partner Alan Hirsch was there planning which advertisers to hit up that day, when from the next room, we could hear our friend Joe, who also lived in the house, reciting, shouting really, lines from Rimbaud’s A Season in Hell. In the original French. He’d curse himself when he botched a line, and finally, Alan yelled, “Hey, Joe, could you keep it down, we’re trying to work!” Joe walked into my room, with a quizzical look on his face, and asked us what we were talking about. It was a sub-conscious tic, I guess, but when an explanation was offered, he half-heartedly apologized and said he’d go down to the kitchen and make a vat of pea soup. That was even worse: the smell makes me nauseous.

In truth, had Alan and I not been discussing real business, I could’ve listened to Joe yap in French for a half hour or so without getting bored. Sure, there are rather bothersome men and women on the streets who yell at you, often incomprehensibly, and really angrily if you won’t fork over five bucks, but—and excuse the Panglossian spin—I do believe these nuts are exceptions. Some people, including myself, just like to talk out loud. There are worse idiosyncrasies.