We're seeking refuge from the outside world. 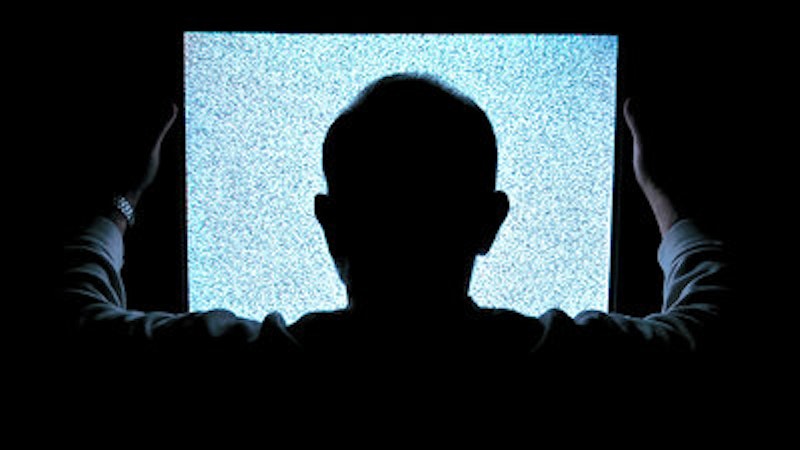 Five hundred channels with nothing to watch, slouched on the couch, remote in hand, eyes glued to the television, like a breathing Margaret Keane painting. We’ve found ourselves here, sitting back and letting the cable programming wash over us like Lidocaine on an aching molar. Here we don’t have to think about work, money, laundry, or irritating coworkers; the rest of the world slips quietly into the backdrop, fading into an afterthought. We’re seeking refuge from the outside world of hardship and resistance, and television offers a compelling medium for this as it enables us to immerse ourselves in a world that’s not our own. That might seem hyperbolic or abstract for a discussion about TV entertainment, but consider the striking similarity to an alternate context in which you enjoy a purchased sensory experience that rocks the pleasure centers as a form of escape—drugs. The television set offers a chilling embodiment of the great American addiction to entertainment and self-gratification, and it’s not coincidental that the United States is the world’s top consumer of both illegal drugs and television programming.

Call it conjecture, but first consider the manner in which the American economy thrives on the worship of self through the promotion of material comfort and wealth. Think of the relentless daily barrage of advertisements for cars, toys and drugs that characterize personal satisfaction as the road to fulfillment—the wants of the individual have been codified as the touchstone of value. More generally, the material comfort provided by consumerism and technology has allowed our society to emerge as an enormous engine and temple of self-gratification, one in which we are each capable of replacing a world of unfathomable volume and connectivity with one that exists, effectively, for our own personal satisfaction. This is subtle and delivered through a great many messages, but the reality is that there’s a particular ethos in popular American culture that you don’t have to be subservient to anything. As Americans, we’ve have had it very easy, materially, for a long time now and have gotten very little help in learning how things are important besides being comfortable. We’re rarely reminded of how we all belong to something larger than ourselves, whether that something is a romance, a family or a constituency.

This focus on comfort and self-gratification has also contributed to the increasingly adolescent nature of American culture. Given that adolescence is acknowledged to be a frightening developmental period in which adulthood begins to present itself as an ever-narrowing system of responsibilities, it’s not hard to imagine why we as a society are so enthralled with drugs and entertainment whose primary function is to “escape.” To be clear, we are not escaping from anything evil or malicious, but rather from the pain and responsibility that inevitably results from engaging with the world around us. Our quest for personal satisfaction can be so effortlessly kept on course through the chemically-or TV-induced anesthesia offered by drugs and total entertainment, that we have developed a tendency to pull inward and away from the outside world of love and hate. That’s not to say that television or drugs are necessarily evil or wicked, but they become dangerous when the desire for comfort becomes a need to escape.

It is this shift from a desire to a need that is of paramount importance here. Let me toss out the idea that we all have a religious impulse to devote ourselves to something, we all “find our temple” so to speak, and the American temple of self-gratification you won’t hear much talked about is unconscious. Our desire for comfort has slowly become a need, and this need to indulge every impulse is actually a very strange form of addiction, that of personal satisfaction.

In this context, it’s not difficult to see the parallels between chronic drug use and immutable entertainment. Both are characterized by a radical self-gratification and both offer an escape from the responsibilities of adult American life. However, perhaps most importantly, chronic drug users and chronic television-watchers tend to become alienated from their friends, family and community at large. Devotion to one’s personal desires leaves little room to let others inside, and this is the real danger of America’s subtle addiction. There are parts of each of us that need to belong to something larger than ourselves, whether this is a family, a community, or a body politic, and these parts are not nourished in the commercial system. They must be actively sought out and worked on. Our proclivity for drugs and television offers an example of a society that’s become increasingly addicted to personal satisfaction and escaping from the interpersonal relationships that ultimately define us. We are a species that needs both a frontier and a community, for fundamental biological reasons, and this addictive shift to self-gratification has begun to obscure the importance of reaching outward and connecting with real people who have real problems.