Lost in the Pines

Everything about the New Jersey woods is fundamentally creepy. 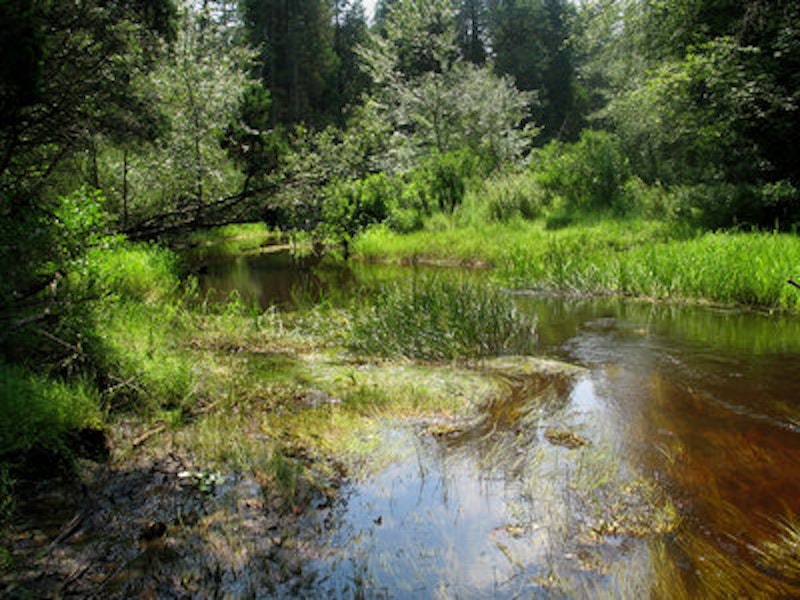 Back in the early 1970s, I used to enjoy hitchhiking out into the New Jersey Pine Barrens. I’d get my ride to drop me off near Chatsworth or Batsto, wander deep into the Pines, pitch a tent, and fry my brain on pure blue methamphetamine and LSD. I had a lot of demons in those days, and the best way to deal with demons is to confront them directly: the only way out is through. There are few methods more direct than setting your mind on fire with acid and meth and running around naked in the woods for a few days, and the Pine Barrens are spooky as hell, especially at night. My favorite poem then was Lewis Carroll’s “The Hunting Of The Snark,” and that’s pretty much what I was doing. It’s a wonder I didn’t vanish.

Caitlin and I unloaded the car at my cousin’s house and took a room for the night in a local Motel 6. We were both exhausted by the trek across the decaying ruins of America, and had just two days to fuck around in Jersey before our respective appointments in Manhattan, she to Pennsylvania Station by noon on Sunday for the Amtrak headed west, and me to the KGB Bar that night to celebrate the life and work of Ned Vizzini, a gifted voice silenced far too soon by depression and botched pharmaceutical-driven psychiatry.

I’m an angry beast, but Caitlin and the incredible THC capsules from California kept it all in check as we drifted into the Pines that weekend. When people think of New Jersey, they think of Camden or Newark, maybe Atlantic City. Loserville, Springsteen Country, pure urban decay. No one thinks of the Pinelands: 1.1 million acres of protected heavily forested land sitting over 17 trillion gallons of the freshest and cleanest water in the Lower 48 states. Caitlin and I share a fondness for the works of John McPhee, whose book, The Pine Barrens, published in 1968, first triggered my deeper fascination with the place and remains the best and most concise work on the subject.

I drove her down to Batsto Village, first established in 1687. It’s not some theme park replica. Batsto remains as it was when built, with some modifications and structures added by architect Joseph Wharton when he bought the place in 1876. Most of the buildings date to the late 1700s, when Charles Read built the Batsto Iron Works, which supplied cooking ware and other household objects and supplied the Continental Army during the Revolutionary War. The iron business moved to Pennsylvania in the 1800s, and Batsto shifted over to glassmaking, a logical move given the unique properties of the sand found in the Pines, which the locals call “sugar sand.” We took a dip in the river, whose water is referred to as “cedar water,” the color of tea owing to high levels of tannic acid from the white cedars lining its shores and rust from the abundant bog ore that formed the basis of the iron industry there. I still have a fist-sized piece of castoff glass, plucked from that river when I was a little boy in the late 1950s.

The culture of the Pines is radically different from the rest of New Jersey. “Pineys,” as the residents are known, tend to be more like the “Down Easter” residents of rural New England, and they’ve got the accent to match. The dialect spoken in the Pines sounds more like backwoods Maine or even Boston than the typical Manhattan/Philadelphia mash-up that one hears in the rest of Jersey. They tend towards contrarian political positions. There were plenty of Tory sympathizers in the Pines during the Revolutionary War, and most Pineys sided with the South in Lincoln’s War Of Northern Aggression. They still fly the Bonnie Blue out there, proudly and without apology. For them, it had nothing to do with slavery. Most Pineys are descended from indentured servants and slaves themselves. There were plenty of white slaves in the original 13 colonies. For them, it was about state sovereignty, and still is.

Biker culture is huge in the Pines. Philly is very definitely Pagans turf, and NYC belongs to the Hells Angels, but the patch you’ll see most often in the Pines is the Breed, founded in Asbury Park in the 1960s. Hells Angels and Pagans are fairly predictable: men who live by a code, like troubadours or knights. Not the Breed. The Breed are more like Joe Sixpack’s imaginary bikers: mad, bad, and dangerous to know. Nonetheless, we hit a few known Breed bars and haunts, diminished and desolated by age and the ever-encroaching police state. I knew as a kid that I would someday see a time when only bikers and mob guys could be trusted, and here we are.

I took her to Chatsworth, the very heart of the Pines, home of R. Marilyn Schmidt’s amazing little shop, Buzby’s, the single best source of information on the Pine Barrens. I had the privilege of introducing Caitlin to Marilyn, a moment that I’ll cherish forever, shared with a weird and unusual black and white cat Marilyn had recently rescued possessed of an unusually discerning attitude regarding humans. She took to Caitlin immediately. All cats love me, of course. Marilyn informed me that she was selling the place, due to age and the inability to find good help. I have never wished more for good credit.

There are over 60 varieties of orchids that grow in the Pines, as well as one of the widest varieties of carnivorous plants on the planet, owing largely to the lack of nitrogen in the soil. It’s full of rattlesnakes. They’re all over the place. Copperheads, too. Owls. Creepy animals of every shape, size and description. Everything about the Pines is fundamentally creepy, right up to the mist that rises from the bogs on summer nights.

I drove Caitlin to Leeds Point, the birthplace of the legendary Jersey Devil. We rode past the ruins of the old Leeds house on Scott’s Landing Road, where it was supposedly born. We ripped our way up the Jersey Shore via Highway 9 of Springsteen fame. I took her to Sandy Hook, to Gunnison Beach, where you can stand naked in the Atlantic Ocean and gaze upon New York City in all its distant and forever now unattainable splendor, from Brooklyn to Manhattan. It’s an incomparable view, especially naked in the sea, loaded on pot capsules from California, mildly worried about sharks.

I wrestled the car into Manhattan and dropped Caitlin off at Penn Station with a minimum of horror, but the drive down to the Lower East Side was a true nightmare, a 45-minute hell of thuggish cabbies and oblivious pedestrians walking with their faces glued to their phones. I parked the car a few doors down from the Hells Angels headquarters on 3rd St. It’s probably the safest block in the city. My first apartment in New York was on that block. I could leave my door unlocked when I went to the store. No one breaks into anybody’s apartment on that block. It’s like Mulberry St. in Little Italy.

I wandered the East Village for a while, appalled at how Vegas was overtaking Manhattan, the Styrofoam replicas steamrolling all genuine marvels and artifacts, block by block, transforming one-of-a-kind dive bars into bank branches and Starbucks, an architectural insult of frigid steel and glass, no character whatsoever, an endless plastic landscape of Lego blocks for billionaires. I dropped into McSorley’s, the only bar that matters. When McSorley’s closes, turn the lights out on New York City. It’s the one place there that I can think of where authenticity is a genuine priority. They’ll throw you out in a heartbeat if you go maudlin, hostile, or in any way obnoxious. McSorley’s is the only bar I’ve ever set foot in that is totally professional in its clientele. Amateur drunks are simply not tolerated there.

The event at KGB was sweet and wistful. I saw a lot of folks I hadn’t seen in many years. Each of us read an excerpt from one of Ned’s works, thus avoiding any long-winded overly sentimental personal exposition. Making my way back to the car afterwards, I tried to avoid thinking about just how horrible 2013 had been. So much death. The great risk we take when we open ourselves to love is loss. Time is a thief. Outliving all that you love is a perfect curse, but closing off and denying love is far worse. The pain of loss is the price paid for communion. It’s worth it, but knowing that doesn’t make it any easier.

I left New York City under cover of the night, with no regrets over having left nine years earlier. Big city life no longer suits me. It was time to find that cabin in the woods.