In the light of Russian Orthodoxy, the American Thanksgiving feast seemed weird to me. 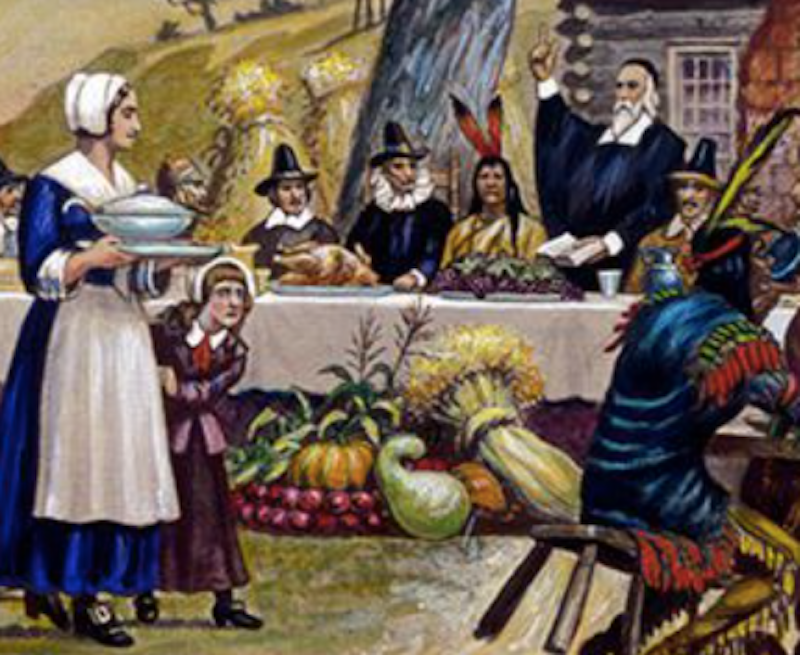 For a long time I was conflicted about Thanksgiving.

I grew up enjoying it like any son of the Midwest—like any good American. During my childhood, the holiday meant an hour’s drive to my uncle Bob’s house in Shaker Heights, and the day was always great fun.

Bob’s three sons were all older than me, and made up a boisterous trio. They knew things that I, a socially awkward only child, never had a chance to learn. As soon as my family crossed the threshold into Bob’s house, packed with more than a dozen members of the Ohio/Indiana Harrises, and various aunts’ cheeks had been bussed and uncles’ paws shaken, my cousins would spirit me away into their suite of bedrooms at the top of the house, their mildly corrupt sanctum. On successive holidays in their secret space I passed through a number of rites of passage. I chewed tobacco, clicked open a switchblade, pawed through a copy of Playboy, was acquainted with the unsettling art of R. Crumb, and learned what a “redeye” is. (Or one of the things it is. My cousins definitely didn’t have in mind the strong coffee drink or overnight flight.)

Then we all descended into the pleasant cauldron of a typical middle-class Midwestern Thanksgiving of the post-war era. No need here to spend too much time on the holiday verities. These include the cylinder of cranberry jelly that Aunt Bee made to slither onto a plate from the can, the sweet potatoes starred with marshmallows, the bottle of Canadian Club that the uncles passed around the edge of the table, and Uncle Bob’s yearly grace: “Good food, good meat, good God, let’s eat.” Not to mention the peppermint stick ice cream, the Lions game through which I slept in a sugar coma, and the bleary ride home in the back of my parents’ overheated Buick.

Plenty—or so it occurred to me as I got older and left my ancestral Methodism behind, first for Catholicism and then for Russian Orthodoxy. Orthodoxy saved my soul, but it soured me on Thanksgiving, an inheritance from the radical Protestant fanatics who, our folklore tells us, established the holiday in Plymouth centuries ago. In the light of Russian Orthodoxy, the American Thanksgiving feast seemed weird to me, an impious vulgarization of the “giving-thanks” ritual that’s supposed to express itself through sacraments, not pig-like American gluttony. Every Thanksgiving, whatever cretin happens to be occupying the White House takes to the airwaves to “thank the Almighty” for “His bounty” and “the blessings of liberty,” using that oily rhetorical register that I associate with Evangelicalism and other American perversions—and, in Indiana, poor John M. Harris turns off his radio and throws up.

There was a period of five years, in fact, when my anti-Americanism got the best of me, and we celebrated no Thanksgiving chez Harris. Instead, we committed ourselves to fasting, prayer, mild self-mortification, and meditation on the Logos, the Theotokos, and the glorious martyrdom of Saint Ivan the Amputee at the hands of the Tatars in front of the Monastery of the Holy Ascension in Vitebsk.

I’ve mellowed a lot since then, and here at the homestead we celebrate Thanksgiving once again. My Americanness is, whether I like it or not, an integral part of me, something to accept and to synthesize into my Russian Orthodox identity, rather than to despise. The Harrises have been on this continent for 275 years. We’ve done our part in building this massive, disgusting excrescence and Protestant heresy that goes by the name of the United States of America—so we deserve a day off, too. Joking aside, a feast day is a pleasure, and the Russian Orthodox Church doesn’t deny its adherents their honest pleasures.

As I type, Mother is in the yard picking out one of our turkeys for slaughter next week. We will disembowel the bird using the old Hoosier country method, which involves sticking the forearm up the bird’s anus and pulling out its innards, much as one might turn a pair of inside-out trousers the right way round. Delectable epicurean pleasures await. Happy Thanksgiving to all!