If you listen close to the sound you might hear that beat of a generation. 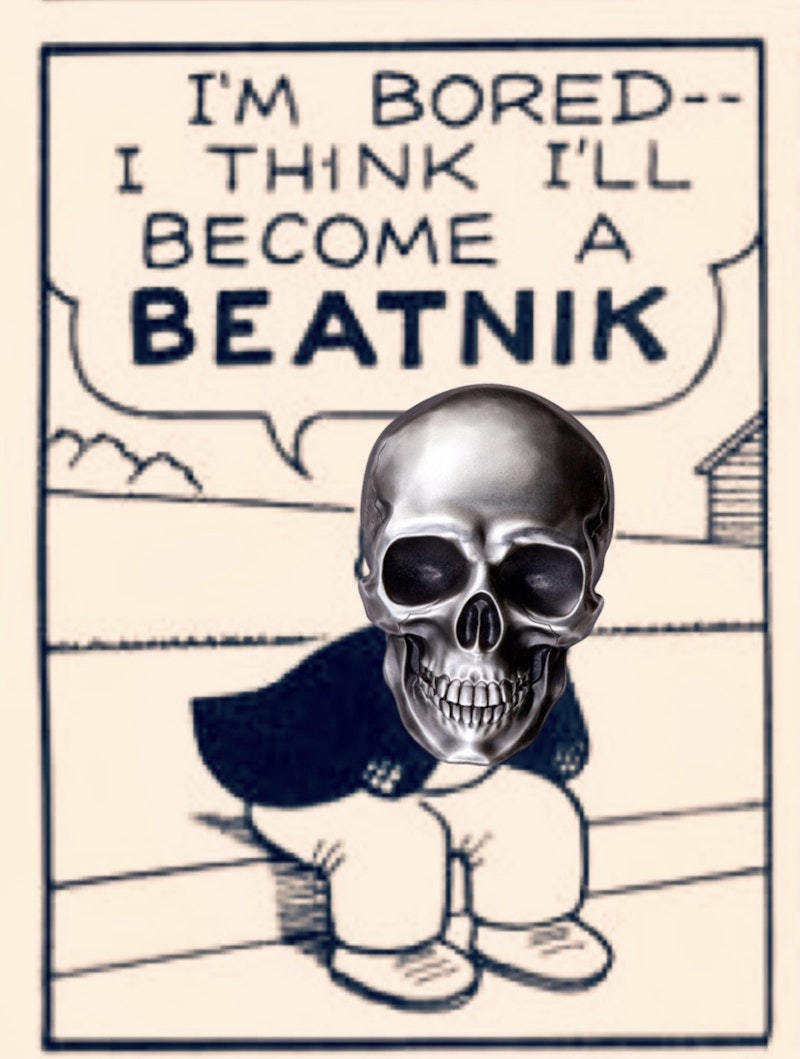 The Beat Generation never spoke to that original gang of misfits that ignited it. They didn’t have a literary clue. It was always a post-war dilemma that fueled the imagination. Starting off with the earliest concepts from a handful of oddballs that were truly beat. In a real sense the skeleton crew of young men and a few women involved in those early years didn’t consider the influential impact it delivered to future generations.

Leftovers from The Lost Generation, it made for an alluring rejection of militaristic authoritarian mores. It was an unconventional life they lived and loved. The style of Eisenhower 1950s. Lots of god, guns, mother, commies, baseball and country. The new medium of television offered pictures to go with words heard only before on the radio. The name Beat Generation stuck but was coined long after its inception.

It was an ensemble cast of human oddities that reveled in spiritual acts of poetic glory... the truest calling. Like Neal Cassady, the energy of the holy goof hero, Dean Moriarty from On The Road morphed into the Merry Pranksters 1960s. From Woodstock to the last stop at Altamont, the end of the line. Jack Kerouac’s, “After Me, the Deluge” was his bitter prediction of the next generation coming too fast.

It transformed beatnik bohemia into hippies of the peace, love, art and music scene. Pop culture’s next big new wave. Surrendering to the final statement of the monster that created too many bastardized Beats floundering and crashing on the shores. Donning uniforms of bell bottoms, polka dots, fringe jackets, paisley print patchouli clones in all the latest fashions with druggy dollar sign eyes cashing in after the flood and inevitable finish. It was a Laugh In Zen far from innocence or truth in advertising.

They aligned with purist drug store counter cultures of Benzedrine/coffee/cigarettes/weed and wine, fueled with degenerate renegades. All things bohemian tied with an umbilical cord of logical next steps to the roaming gypsy, connecting the lone wandering minstrel with a guitar. The Beats were impolite urban vagabonds. Hard-traveling bards with typewriters and suitcases full of poems. No flowers in their hair.

The original Gang of Four included William Burroughs, Gregory Corso, Jack Kerouac and Allen Ginsberg. There were many others to follow that imperfect quartet of junkie, convict, drunk and gay. With all the improv jazz soundtracks that foment free form rebellion. Rotten livers and broken hearts. Not average dirty-winged, angel-headed hipster of goatee, unkempt hair under French beret, and a candle in a bottle, a Molotov cocktail of love, pot, amphetamines, coolness and bongos.

The tags of addict, criminal, alcoholic and homosexual were an interchangeable mix and match on any given day. Good, bad or indifferent, the act of poetry has its own illusive reward of immortality. Then there’s the fact that nobody was ever getting paid to be a poet. As if poetry and money could co-exist. Troubled youths never had it so good, sublime juvenile delinquents doing their own thing from the wrong side of the tracks to the other side of the fence.

Chain-smoking, heavy drinking, black leather jacket clad blue jeaned bikers. Movies like The Wild Ones, and street gang flicks like Rebel Without A Cause, West Side Story and To Sir With Love. The big question, “Hey Johnny, what are you rebelling against.” Answered with a counter question “What do ya got.” These guys made their own rules. Easy Rider, Midnight Cowboy, Hell’s Angels, Beatles, rock ‘n’ roll, Rolling Stones, be-boppers, Wild In The Streets, Lenny Bruce, Charlie Parker, Dizzy, Miles, Woody, Moondog and Dylan. Tiny Tim, The Fugs, George Carlin, Jackie Gleason, The Rat Packers of Las Vegas cool, mobbed-up Buddhist monks all. They played a pivotal role in my own mystique of Beat. Coffeehouses and cocktail lounges where poetry flowed along with the drinks while intellectuals snapped their fingers in appreciation. Too busy listening to the voices in their heads. Tormented souls writhing in misery for that quick dope fix. That next poem. The junkie sighed, “Man, I’m really beat.” Puffing a cigarette smoke sigh of resignation.

My early experiences of all things Beat took place in downtown Baltimore. The streets where I worked and played were still the epitome of 1950s Beat. Learning a map to pathways of least resistance. A kitschy outré where all those hidden emotions in plain sight places of a neo-Beat thrived among the disillusioned culture vultures. Wandering amid the ruins of ancient boho haunts. The past was passé. There was a time when the whole damned city of Baltimore was Beat. The future didn’t bode well for poets in polite modern society. In retrospect it was flawless, a breathtaking discovery of word-bound roots. Always growing, reinventing old ways shaping new days. For a poet from a Tinytown in some pretend metropolis it was a natural path of resistance, a consequential course of action in poetry’s musical motion.

The poet’s afterbirth of fresh subculture babies. Aborting outdated ideas while rethinking old questions of who we believe to be. Who are they are in the equation? The ones to rebel against. The Beats embodied all that too. It was religious without religion. When asked to define what It means to be Beat, Kerouac compared it to the Beatitudes from scripture. The beatitudes speak about blessings. Blessed are the meek... blessed are the poor... blessed are the hungry who thirst... blessed are the very poor for they shall inherit the earth... it goes on. Beat is the song of hearts singing. Just say the words. If you listen close to the sound you might hear that beat of a generation.