The much older western waterfront along the Belt Parkway hasn't changed much since 1940. 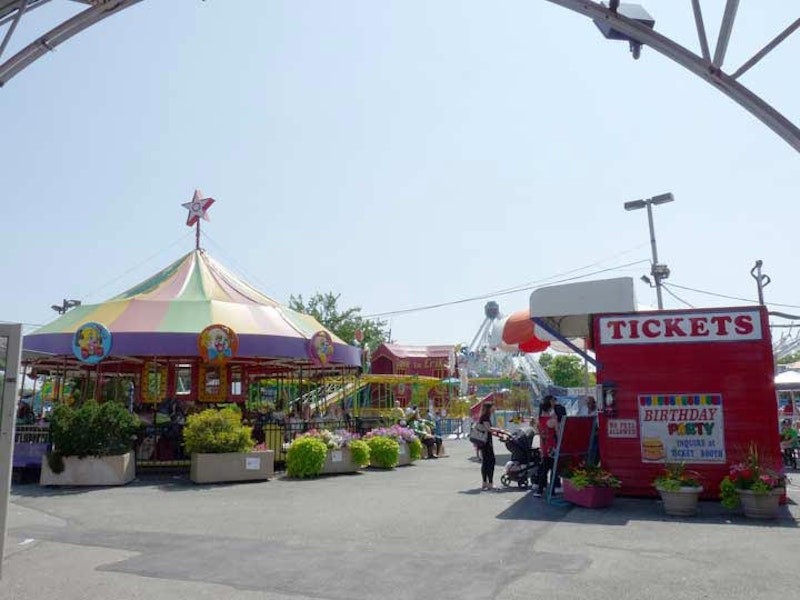 In contrast to Brooklyn Bridge Park and the developing Williamsburg and Greenpoint waterfronts, whose new parks and waterside “rich people storage” units are covered in every page on the Internet from Brownstoner to Gothamist to Curbed, the much older western waterfront along the Belt Parkway has had bike paths and waterside roads available to the public since 1940, and they haven’t changed much since then.

The Belt Parkway bike/pedestrian path in Bay Ridge is well-known and well-patronized, running from the 69th St. Pier along the waterline beside the parkway south and east to Bay Parkway. There, the “bike path” ends. A few miles east, it resumes again along Sheepshead Bay and the Belt Parkway, but to get there, bicyclists have to bet their luck against the eastbound Belt Parkway service road, then Cropsey, Neptune and Emmons Aves. out to Knapp St., where the path resumes and continues east to Howard Beach. I’ve bicycled that path just once and that was in the 1990s before the path was repaved. Before that it was an obstacle course with weeds and broken glass, which was the case with a number of bike paths, if they existed at all, in the 1970s and 1980s; in those days, before a powerful bike lobby emerged, bikes were considered toys or used only to deliver food. The bike path was duly repaved and improved after I moved to Queens in 1993.

There has been an amusement park under one name or the other along this stretch of the Belt since the 1960s, at least. In my youth this was called the Nellie Bly amusement park, named for the groundbreaking 19th-century journalist. These days it’s known as “Adventurers Family Entertainment Center” with a pirate in its logo. No fake danger here as in the Thunderbolt or Cyclone in Coney Island; here the rides are for kids two through eight years old. 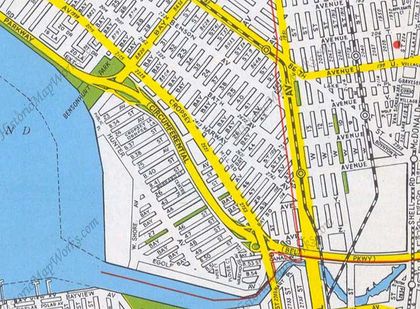 Here’s a 1949 map of the area which shows a substantial street grid west of the Belt, or as it was known in the 1940s, the Circumferential Parkway (people could spell a lot better in the 1940s than they can today). I’d imagine the city planned to landfill the area and build houses in a new street grid here along avenues called Hunter, West Shore and an odd name, Egolf Ave. Few of these streets exist—this neighborhood is fairly inaccessible past the Belt Parkway as only 26th Ave. connects with the other side. There, streets were on the books for decades—a 1929 Belcher-Hyde atlas shows them too (as well as a group of streets, Stryker and Hubbard Sts. and Centre Pl., that’ve vanished). 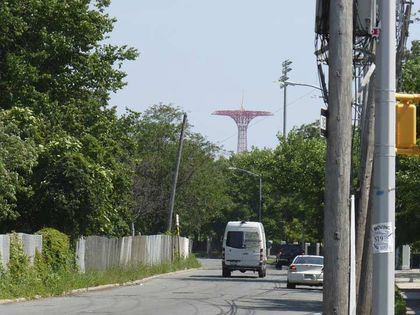 The Coney Island Parachute Jump looms ever larger along the Shore (Belt) Parkway service road as we go further south. The Parachute Jump was devised as a training venue for paratroopers, but was fashioned into a semi-safe amusement for the 1939/40 World’s fair in Flushing Meadows. It was moved to Coney and was in operation until the early-1960s. It’s now landmarked and has become a symbol of the “Brooklyn Riviera.”

In Brooklyn and Queens, “Shore” and “Belt” Parkway can be mentioned interchangeably. However, to the Department of Transportation, it’s another story. The name of the parkway between the Gowanus Expressway (at 3rd Ave. and 64th St., where it branches off) and the confluence of Laurelton Parkway and the Sunrise Highway in Laurelton, Queens, the parkway itself is the Belt Parkway and is displayed that way on highway signs. But, the service roads on the north and/or south sides of the Belt Parkway are signed as “Shore Parkway” by the DOT between Bay 8th St. and Emmons Ave. and Knapp St. There’s also a short section of service road between 80th St. and Cross Bay Blvd. on the north side of the Parkway alternately signed “Shore Parkway North” or just plain “Shore Parkway.” East of Cross Bay Blvd., the Belt Parkway joins the route of Conduit Blvd. coming in from Brooklyn, and the service roads out to the Queens line are called North and south Conduit Ave. (in the 1930s and 40s, the whole run of Conduit Blvd. and the Belt Parkway was part of Sunrise Highway!) 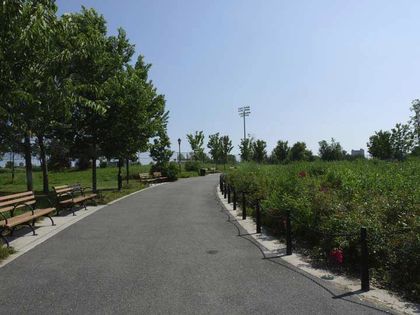 Just beyond Bay 44th St. is the entrance to one of Brooklyn’s little-known public spaces. After decades, the streets in the area on the map shown above remained undeveloped territory.

The story of Calvert Vaux Park begins in 1933, when the Dreier-Offerman home for unwed girls closed its doors and donated part of its holdings to the city. Over the years NYC Parks acquired more surrounding land from the city, including 72 acres of landfill built from the excavations done for the Verrazano-Narrows Bridge project. Through the decades Dreier-Offerman Park remained mostly undeveloped except for a couple of baseball and soccer fields. By 2011, the park, renamed in 2004 for Calvert Vaux (1824-1895), one of the developers, along with Frederick Law Olmsted, of Central and Prospect Parks, received new soccer fields and much of the grounds were cleaned up, with new walkways and signage pointing out the flora and fauna found along the park’s border with Coney Island Creek. Vaux, a Brooklyn resident, was found drowned in Gravesend Bay in 1895. 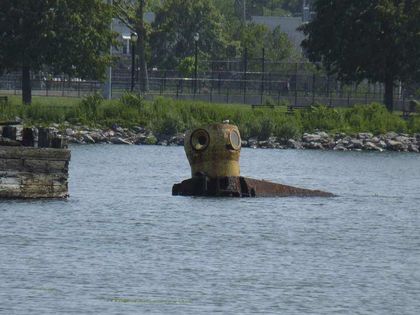 Like other canals and creeks in NYC, Coney Island Creek is polluted and brackish, but it supports a wide range of flora and fauna along its oily, garbage-strewn shores. Some of the salt marshes along Vaux Park are coming back: horseshoe crabs, fiddler crabs, ribbed mussels and snowy egrets are plentiful again.

A vessel pokes its nose above the creek’s surface—barely. This is the Yellow Submarine (known as the Quester I), launched by treasure hunter Jerry Bianco in 1970 to explore the Andrea Doria, an Italian luxury liner that sunk in 1956. Unfortunately, the Quester I itself sank shortly after its launch, and it’s been bobbing in Coney Island Creek ever since.

Bianco believed he could build a vessel strong enough to descend to 240 feet of water, where the liner rests at the bottom off Nantucket, and could raise the sunken vessel by filling it with inflatable dunnage bags; when filled, the bags would lift it off the bottom or to the surface—or so the theory went.

Unfortunately that was as far as it went. The crane engineer lowered the sub completely into Coney Island Creek, disregarding Bianco’s instructions. Bianco had removed the ballast from one side of the sub to save money, and the engineer was told to lower it only partly into the creek. Like the ocean liner it was supposed to help salvage, the Yellow Submarine listed severely in the water and couldn’t be launched. Bianco later refilled the ballast and tethered the sub, but his backers’ enthusiasm waned, and he could never return to the project. Eventually some of the sub’s parts were stolen, and it got loose from its moorings in 1981. 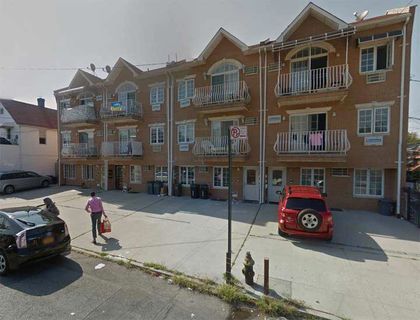 This group of buildings at Bay 43rd St. and Bath Ave., near the waterfront, are nothing much—they display standard issue for modern multifamily buildings in 2015, with a concrete lawn, RediRust® terrace railings, and are overall character-free. However, the buildings should have a plaque in front of them.

Why? It was here that Moses and Jerome Horwitz built a group of houses in the mid-1920s. The brothers worked as building contractors in the 1920s but later joined their friend Ted Healy in a stage show at the Prospect Theater in Park Slope, and the brothers, along with pal Lawrence Fineburg, are better known these days as Moe and Curly Howard and Larry Fine, the Three Stooges.

Most of the Stooge-built homes were torn down over a decade ago.