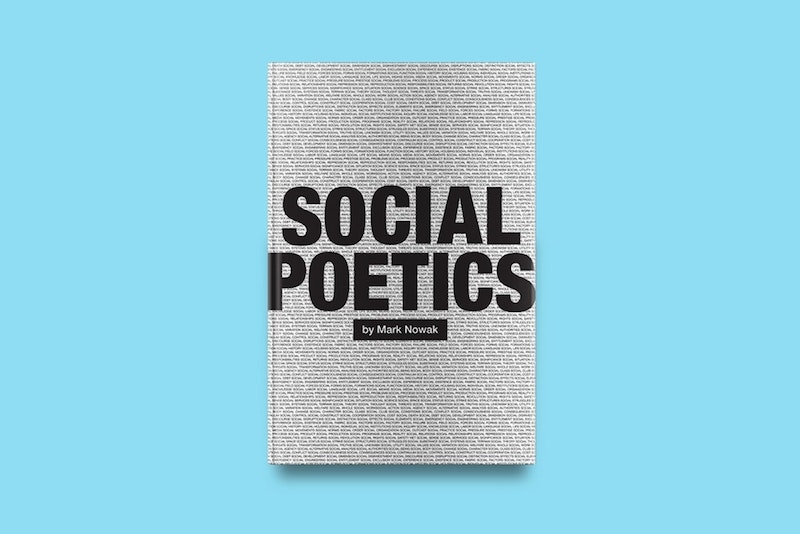 In his collection of essays, Social Poetics, Mark Nowak argues against the "gentrification of literature," for the power of poetry to give working class people voice against their exploitation, and to create dialogue among workers, across borders and even oceans. Nowak, a poet and labor activist who teaches creative writing at Manhattanville College and is the founding director of the Worker Writers School at the PEN American Center, "seeks to liberate the poetry workshop from... hierarchical systems" and sees the typical Iowa workshop, "that often degraded and disdained centerpiece of the neoliberal writing culture," as "a largely untapped radical potential for social transformation."

Nowak's ambitions for poetry and poets is global, informed by writers from America to Asia to Africa, such as Ngugi wa Thiong'o, whose long quote, from Barrel of a Pen: Resistance to Oppression in Neo-Colonial Kenya, Nowak uses in his introduction to set the stakes for the whole book.

Our pens should be used to increase the anxieties of all oppressive regimes. At the very least the pen should be used to 'murder their sleep' by constantly reminding them of their crimes against the people, and making them know that they are being seen. The pen may not always be mightier than the sword, but used in the service of truth, it can be a mighty force. It's for the writers themselves to choose whether they will use their art in the service of the exploiting classes and nations articulating their world view or in the service of the masses engaged in a fierce struggle against human degradation and oppression. But I have indicated my preference: Let our pens be the voices of the people.

Readers shouldn’t assume Ngugi, and Nowak, are talking only about so-called “developing” countries: Nowak is critiquing America in Social Poetics, and American literature, embodied in the Iowa-model poetry workshop, in which mostly middle-class people pay lots of money to learn to craft their poetry into something acceptable for the entrenched publishing power structure. (Full disclosure: I've done this.)

The essays in Social Poetics come from Nowak's experience of leading workshops around the world, far from classrooms. Instead, they take place in, say, Ford factories in Wisconsin and South Africa. And although Nowak criticizes Kenneth Koch's "apolitical" approach to teaching poetry—the "playful 'wish' and 'lie' and 'dream' poems" which foster "a Fordist model for the mass production of youth poetry," he does seem to use the same approach in his own workshops: bringing in sample poems and encouraging the people to emulate either the form and/or the feel to create their own. He calls this workers being in dialogue with each other, though that isn't different from what Koch does: all poetry is a dialogue with poets who have come before.

The difference is in the subject matter: you bring in playful surrealist poetry, and you'll get playful surrealist poetry written back. But, if you bring in political poetry, you'll get political poetry back. Which feels risky. Koch wanted to avoid that risk for beginners—he was more concerned that the writing of poetry be fun and accessible in order to entice people (children and adults) to feel comfortable enough to try it. Nowak sees the type of poetry favored by Koch as too safe, benefiting from, and replicating, the society in which, to quote Joe Biden giving a speech to his rich donors, "Nothing will fundamentally change."

Nowak—informed by his reading and research into other teacher-poets, like June Jordan, Adrienne Rich and Amiri Baraka—wants change, and wants poets to get righteously angry and critique our world. I don't see this as necessarily either/or though: one can have fun, be playful in writing poetry, while critiquing the world around us. Although I have my composition students write poems—writing poetry is the first step towards thinking about one's place in the world, which can only lead to critiquing that world—I’ve leaned towards not bringing politics into my classes so as not to alienate anyone. I want to welcome neo-liberal Democrat centrists and conservatives in my community-college classrooms too. Nowak's workshops are outside the school system: he’s invited, and the people in the workshops volunteer—they know what they're getting into. Can introducing political writing into classrooms where students have to be there still work? Or should the question be, how can we not feel obligated to bring a critique of our current political situation into our writing classrooms?

Still, although Nowak cites his Marxist theory, and even Paulo Friere, whose Pedagogy of the Oppressed should be essential reading for every writing teacher, Nowak's workshops sound like they replicate the same Iowa power structure. He's in charge, he brings in the ideas and assignments, and the students do what he suggests. Is that bad ? I don't know. He’s invited, and they volunteer. That's more than most regular writing instructors in the trenches get.

I don’t think his “dialogue” via poetry between workers of the world is much of a conversation. It wouldn't exist without his efforts. Nor even do I think the poetry being written is great. As an instructor, I’m am just happy when students write a poem, period, but Nowak spends pages bragging about the quality of his students' writing as if it were better than John Ashbery or Charles Bukowski.

I want to be on Nowak's side: I also love when my students write poems, and have experimented with group poems. I just don't see that working on a large scale, and certainly what he values is what we in Comp Theory call building “community”: poetry, sharing any kind of writing with each other, helps students learn about each other—they learn each others' stories, and ideally they become friends, and feel welcome in the classroom, and are more likely to stay in school.

Nowak walks the edge between individualism and collectivism: from his descriptions of these workshops, people write Romantic poems, from and about themselves, which then gives the framework to join them together in larger poems. Again, I've experimented with this, with some success in community college level classes. And it builds community. But it still comes from the individual writing about themselves. And that's not bad. Nowak just wants to open new spaces for new writers, and new writing.