I Can’t Do This Much Longer

The characters of Oliver Bateman’s hot take-verse keep coming to forks in the road. 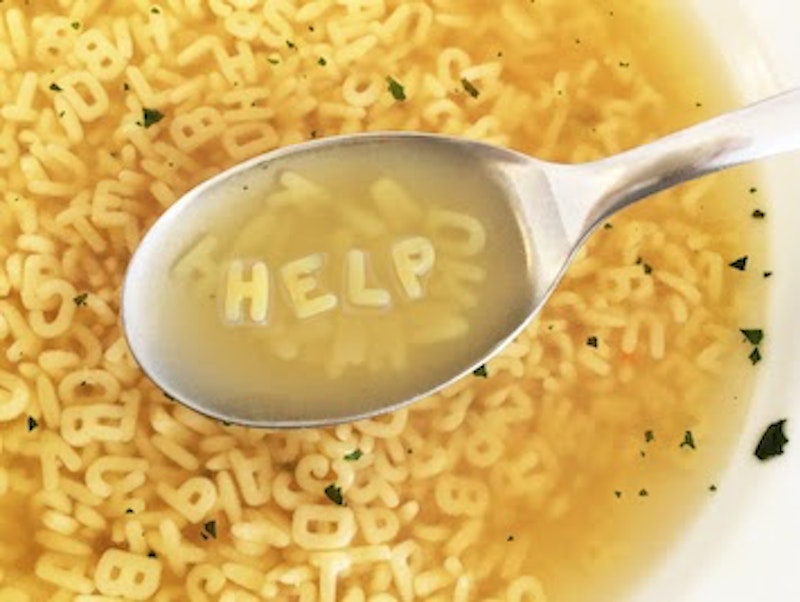 The Papa Bear had started something he couldn't finish. It was going to be the grandest garden-gnome village the world had ever known. But after just four trips to Target's garden section, he realized he couldn't afford as many of those little chumps as his vision demanded. He was on disability for his various problems and addicted to fantasy football, after all. So he stopped at about 20 gnomes.

It was an underwhelming sight. The gnomes almost blended in with the grass and the bushes. None of the neighbors said anything. Even the neighborhood kids, whom he'd imagined lining up to tour his grand village, didn't comment on it. It just looked like he had left a bunch of crap in his yard and forgotten to pick it up.

So when the hurricane came, he looked out his cave window at their ridiculous imp faces. They seemed to mock him. He left them out there as the trees began to rustle and the birds all flew for cover.

"Come on Irene," he sang softly, his breath fogging up the glass, invoking the name of this particular storm, although the song was really "Come on, Eileen." He had never been good with song lyrics, either.

Jack Chaser was working as a beat cop who sat in one of those cop cars you see parked in a sneaky hiding place along the Interstate to catch speeders. Part of what made his hiding place so sneaky was this big overgrown bush that blocked his car from oncoming traffic. He caught them going southbound across the Henrico County line, entering his jurisdiction. The county's grounds-maintenance crews were under strict orders not to trim the overgrown shrub when they mowed the rest of the median. They knew it was the cops' hiding place.

But then one day some new employee made a mistake and cut the sucker down, manicured it down to the nub. Sadly, the new employee had been trying hard to go "above and beyond" what was asked of him, thinking his supervisors would praise his handiwork. Except no, the new employee wasn’t supposed to do that. He didn't get fired, just reprimanded.

So now Jack Chaser sat in his usual perch, the place the Chief told him to go to catch folks as they entered the county with its notorious "zero tolerance" for speeders. The oncoming cars could see the cop car plainly. And they slowed down as soon as they saw him.

They slowed down to a conspicuous, unnatural, downright eerie slow rate. As if to say, "La la la, nothing to see here, just li'l ol' law-abiding me." Jack Chaser knew they all sped up as soon as they were out of his sight.

With each slowing-down car, he felt their contempt. He felt their resentment at having to lie, for just those few moments of road.

He’d gotten this job to do good; to be loved, not hated.

So he went and laid down on the road, in plain view of oncoming traffic.

Camden Camden got fired from Hot Take Publishing for plagiarizing fortune-cookie messages. And “sexy” horoscopes from Cosmopolitan magazine. And the random formations in her Campbell's alphabet soup. And lots of stuff she read throughout her day—ingredient labels, the back of her toothpaste tube, Netflix movie summaries, The Drudge Report. She was stealing from all over the universe.

"How can I get sued for that?" she protested about the alphabet-soup charge, owning up to all the others. "It's random! It's Divine Providence telling me what to write!"

Hotshot attorney John Luxton clicked his briefcase closed and said, "That's right—those messages are from Destiny. But they were for you alone, not for others. So now Destiny is suing your ass. Destiny is our client."

"What the eff?" Camden Camden said as the men in black suits left her tiny rat hole of an apartment and she stood there holding the court summons.

So Camden Camden packed a small hobo bag and scooped up her chihuahua, All Day Pepe, and got in her car and drove to the Canadian border. But those clever Canucks—you have to get up pretty early in the morning to pull one over on them, and Camden had slept in till noon. So they did not let her cross the border. She sat in her car at the border-patrol station, gazing wistfully across the invisible line and shedding little tears for the fabled land she would never see.

"I know! I'll redeem myself by cranking out a masterpiece of shimmering originality and dazzling poignancy, one of those jazzy Susan Orlean numbers. Then nobody will want to sue me, because who wants to sue a national treasure?"

She opened up a blank Microsoft Word document. Not the kind that ends in ".docx," because not everybody can open those, so that's just rude.

She sat there and tried to type a string of words that was her own, that wasn't consciously or subconsciously or unconsciously borrowed from somewhere else. But nothing came.

When she finished, tears poured down her face. There it was, what she had been trying to say for so long.

Only, no one got it. They agreed it was original, but it fell far short of making her a national treasure. Also, perhaps more damning, it was mathematically incorrect, because she had gone to one of those low-residency colleges in New England where you pay $50,000 a year in student loans to avoid taking academic courses.

So Destiny sued her, and Camden Camden lost. Much like the heroine of a certain Netflix show about which Camden used to sell clever-kid episode summaries, she had to wear a bright-orange jumpsuit and serve in a chain-gang and pick up trash. Because that's how it works in the state where Camden Camden resides. What, your state doesn't do that to people who get sued and lose? Well, consider yourself lucky. As Burt Reynolds says: "Count your blessings."

Camden Camden picked up trash: chip bags and candy-bar wrappers, ads, junk mail. She refused to see the words, only the letters, scrambled and pointless.

Dear Reader, I’m going to level with you. I don't think I can do this much longer.