Thoroughbreds tend to be sensitive, fine-boned, and even fragile. 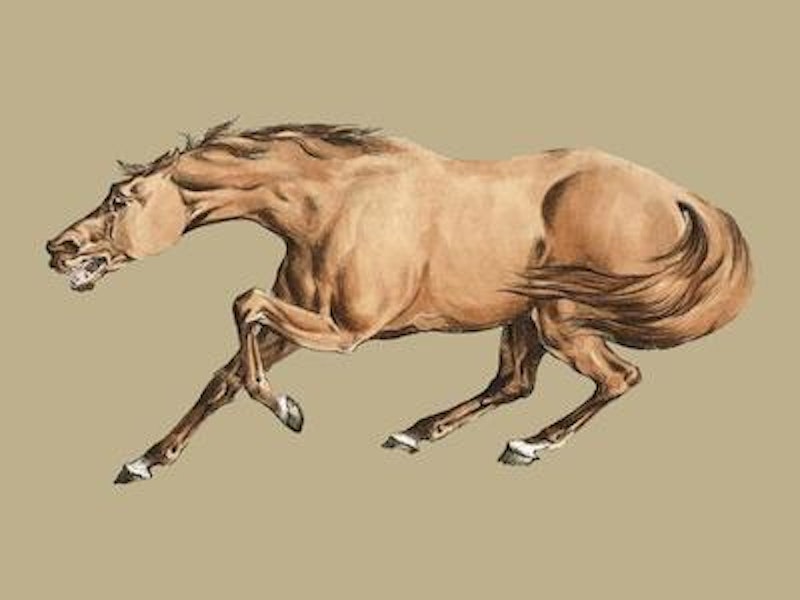 Julio, the obstinate, challenging Percheron/Morgan cross bay with whom I’d been learning to ride since February 2017, went to honorable semi-retirement at a Vermont stable in July 2018. He’s been trained as a therapy horse. He’s working with emotionally troubled children. He loves kids and they love him. He’s doing well. I miss him.

Toby, Julio’s successor in my riding life, is a 15.2 hand thoroughbred. The term “hand,” when used to measure a horse’s height, was once defined as the breadth of the palm including the thumb. King Henry VIII standardized it at four inches. He was the kind of guy who could make that ruling stick. Hence, from the ground to the withers (the flat area of his vertebrae atop his shoulders), Toby stands 60.8 inches tall.

Toby is a barn name, an informal affectionate diminutive. As a thoroughbred, he also has a registry name.

The Jockey Club was founded by Leonard Jerome. He was the father of Jennie Jerome and thus maternal grandfather of Winston S. Churchill. Jerome Park, Jerome Ave. in The Bronx, Jerome Ave. in Brooklyn, and the Jerome Stakes, run every January at Aqueduct Racetrack, are named for him.

The Jockey Club keeps a registry of thoroughbreds and their lineages. It shows that Toby descends from Nashua and Native Dancer, two great racehorses of the 1950s. Nashua, “the greatest horse who never won the Kentucky Derby,” had 30 starts: won 22; placed in four; and showed in one. He ran fourth in the other three. He was the second American horse to bring home over $1 million in prize money. Native Dancer, “the Grey Ghost,” won 21 of 22 starts. Though the United States Horse of the Year for 1954, he too never won the Kentucky Derby. Both horses had great speed, stamina, and courage.

And Toby? He was born in 1994, sired by Vicksburg out of Noble Dream Maker. His registry name is derived from those of his sire and dam: Noble Victory. I like it.

My instructor, Dorothy Crosby, asserts that Toby’s patience, training, and athletic ability make a great combination; he adjusts well to any level of rider, but loves a good workout requiring some skill and precision.

Well, I’m the man on horseback, so, despite my imperfections—poor balance and coordination in particular—I have to develop the skill and precision.

Two weeks after my last lesson with Julio in July 2018, I began working with Toby. I picked up his halter and lead rope and left the stable for the paddock. I hadn’t paid much attention to Toby before. I remembered only that he was brown and wore hoof boots. Two horses were grazing outside the stable. Both were brown with hoof boots.

I advanced toward the one that looked most like Toby as I vaguely remembered him. I gave him a carrot and then tried to slip the halter over his muzzle. He was having none of it, raised his muzzle to evade me, and walked away, as did his companion. I followed and tried again. The horse kicked me, striking a glancing blow to my left thigh with his left hind hoof as he cantered away with his companion. Three inches to the right and I might’ve been in some discomfort. I was more surprised than hurt. The hoof print-shaped bruise faded away after two weeks.

Dorothy emerged from the stable, calling, “Wrong horse, wrong horse.” I replied, “I gathered that.” She pointed to a third horse, one I hadn’t noticed, about 100 feet to my right. He raised his head with apparent curiosity as I approached. I studied his appearance: slender and brown with a white star on his muzzle and no white socks. We gazed at each other before he submitted to the halter and lead rope and went with me to the barn for grooming. Dorothy suggested that I walk him without riding him during our first encounter, which made sense. He responded wonderfully to mere changes of focus—shifting my eyes, navel, and core. I led him from the left and then from the right, which I find more difficult. Apparently he too found my leading him from the right difficult, as he stepped on my right boot just long enough to trip me. No damage done save my self-respect.

At the next lesson and for the next five weeks, I found him cooperative except during mounting. As I tried to throw my right leg over his back, he often shifted some 18 inches away. Consequently, I fell between him and the mounting block. Eventually, I clambered aboard each time.

I could get him to the trot and keep him there. Our lessons became workouts for both of us. At their conclusions I’d be soaked through with perspiration. I learned the places in the ring where, for some unknown reason, he’d slow to a walk. Following Dorothy’s instructions, I gave him at those places three sets of instructions: three squeezes of my legs, three gentle kicks with my boots, and three taps on the shoulder with the riding crop. They told him to keep trotting, and he did.

One afternoon, Dorothy placed a series of small logs, each perhaps four inches in diameter, about three feet apart. I was to have him approach the logs at the trot so he would become used to taking small jumps with me on his back. We were trotting toward the first log. He abruptly stopped and stared at the log like a small child at a shiny new penny. The sudden stop shifted me out of my seat; the boots and breeches saved me and I sat back down. I turned him, walked about 50 feet, turned him again, and we trotted over the logs, with a slight jump over each one. I enjoyed it.

He was everything Dorothy said he was: consistently responsive to my directions.

Thoroughbreds tend to be sensitive, fine-boned, and even fragile. In September 2018, Toby had some back problems. Dorothy told me that I couldn’t ride him for the moment until he’d been seen by his chiropractor. I groomed him, as usual, and noticed that he trembled as I gently ran my hand along his spine. I’d never seen that before.

By early October, the chiropractor had told Dorothy that Toby could be ridden and needed to be ridden. On the morning of October 11, Dorothy had checked Toby, too, and he seemed fine.

I groomed him, running my hand along his back. He didn’t tremble. I saddled and bridled him and led him to the mounting block. I was mounting without first putting my left foot in its stirrup. It’s the first step in learning how to mount from the ground, without a mounting block. On the third try I managed to throw my right leg over his back and plop into the saddle.

At some point after the chiropractor and Dorothy had checked him, Toby may have had an excessively energetic roll in the paddock. We don’t know. But somehow, he had popped two ribs, a condition called subluxation. The bones had become incompletely out of joint with the vertebrae. Often, the condition corrects itself. It didn’t that day. The consequence for Toby of my mounting him was extreme pain. So he defended himself.

My feet weren’t yet in the stirrups when he reared. This was a new experience for me. He slammed his muzzle into my helmet, giving me a momentary headache. I squeezed my legs together. The breeches and boots kept me in the saddle. I began shortening the reins to gain control of the horse.

Toby’s forelegs returned to the ground. He began running backwards. I was still shortening the reins. The flying stirrups probably whipped him into greater frenzy. I remember thinking this was the first time he’d shown me something of the speed of his ancestors. Though still in the saddle, I wasn’t yet balanced. Then he suddenly stopped.

Newton’s First Law of Motion holds that every object will remain in uniform motion in a straight line unless compelled to change its state by the action of an external force. Toby’s sudden stop didn’t stop me. I flew over his hindquarters.  I was then compelled to change my state by the action of that external force Newton defined as gravitation. I was forcibly reminded that sometimes the hardest thing about learning to ride is the ground.

Dorothy secured Toby. The last thing one wants is an excited horse stamping about a fallen rider. Then she came over to me. I’d regained my breath. I opened my eyes, laughed, and said, “Good God, I've been thrown." After all, the rider who has not been thrown has not ridden many horses. But that was my romantic imagination at work. Toby didn’t throw me: I lost my balance.

As Dorothy helped me to my feet, my quondam steed stood placidly to the side, perhaps savoring the absence of pain. Thus triumphed Noble Victory.