Songs of Robots and Swords 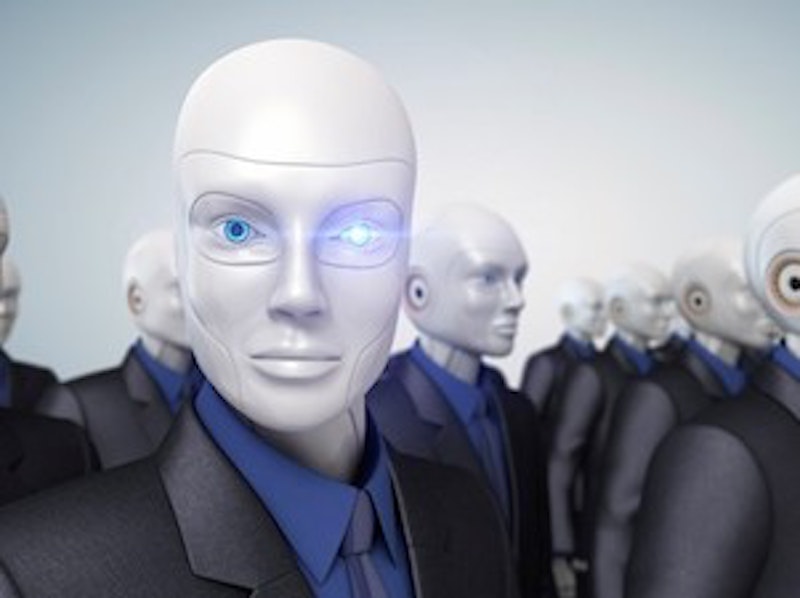 J.R.R. Tolkien, about whom there’s a new biopic out this week, wasn’t that crazy about machines, ending his Lord of the Rings novels with a coda, absent from the films, in which the Hobbits’ homeland had been all but ruined by the introduction of industry. Hippies of the left and Catholics of the right have claimed the author, but mainly he wasn’t that crazy about modernity, which made him an anarchist or a monarchist or a bit of both.

I’m not a Luddite. I lean more toward the robot-filled sorts of fantasies than the elf-filled kind, if I must choose—but I’m surely not the only long-time technophile wondering with mounting worry lately how long it’ll be before the machines replace me. The lawyers and bankers are riding high nowadays economically but may get replaced even sooner than the manual laborers, and quite a bit sooner than the flaky artist and creative types such as us writers.

The Tolkiens (and George R.R. Martins and Todd Seaveys) of the world are probably safe for a little while, since it takes more uniquely-human intuition to be a creative writer than say, a delivery person or a numbers-cruncher. Then again, an A.I. program has reportedly written a country song, “You Can’t Take My Door” (from the aptly-named site Songularity). Although it isn’t very good and doesn’t make much sense, A.I. will keep getting better and better at such things. It’s only a matter of time. Refinement is what A.I. does.

As recently as mid-2016, some people laughed and discouraged me from talking about the prospects of robots taking over civilization one day, saying it undermined my credibility. Who’s laughing now, I ask you? The inevitable rise of the robots is one of the most frequently reported-on sources of modern anxiety in the journalism of the past few years. People really ought to listen to me—both when I’m noting the power of futuristic tech and the power of tradition. There has to be a way to make the most of both forces.

When I launched my personal blog 12 years ago (another era by today’s fast-changing standards), I half-jokingly posted a description of the libertarian future that would be spawned if readers took all my advice. I said the future might well be one filled with Amish transgender cyborgs. I failed to foresee how strident the trans movement would become, but I was wise to bet on increasing tech-assisted fluidity in the culture in general—and remained just a bit conservative in hoping that somehow, like the Amish, pockets of humans would retain some of our old morals and habits of mind even as the world got very strange very quickly.

Efficiency is great—it’d be cruel to hamper people in achieving their peaceful aims—but it’s reasonable to ask how to avoid losing certain gentle, humane, fragile, one might say “patient” aspects of our natures as we hurtle ever closer to perpetual split-second decision-making, instant gratification, and constant corrective surveillance.

Admitting tradition has value may be the first step. It stabilizes. But like innovation and industry, it, too, is an evolved mechanism for problem-solving, even if it’s too decentralized, unarticulated, and informal to have a definitive laboratory stamp of approval. I said as much in articles I wrote starting 22 years ago under the auspices of the Novak Fellows, a grant-making program for fledgling writers that’s now part of The Fund for American Studies.

Among the traditionalists of one kind or another I interviewed back then were the members of a band called Altramar, academics (not just casual ren faire freaks) centered around Indiana University who’d gone to great lengths to create well-researched approximations of songs several centuries old—even playing them on carefully homemade, recreated medieval instruments. A cover band doing 900 year-old hits, you might say.

“We try to go to the primary sources as much as we can,” said Altramar member Jann Cosart when I visited the band back in 1997 in Bloomington. Cosart taught, sang, and played a variety of bowed instruments, including the viola-like medieval vielle on recordings such as Altramar’s Saint Francis and the Minstrels of God. “For the Saint Francis project we were very fortunate that we had a couple of… manuscripts that exist... Those few manuscripts contain music sketches—one line—oftentimes poetry without music, basically a simple sketch, and we have to supply additional material.”

“There was one piece on the Saint Francis CD the text of which was actually written by St. Francis,” Altramar member Angela Mariani told me. “Primary sources from that time tell us that after having made this piece up in his mind and written this text, he sang it to his followers. We don’t know what tune he used... What we did was find a tune of the many amongst the laude spirituali that fit that particular text... And we found when we applied that laude to Francis’s canticle, it fit rather well.”

The resulting simulacra would typically be performed on replica medieval instruments made by Cosart’s husband, Timothy Johnson, who noted another of modernity’s tradeoffs, quantity vs. quality: “Nineteenth-century industrialization brought mass production of violins, but the resulting violins tended to be more poorly made than ones created by hand before the Industrial Revolution.” Stradivarius’ violins are special in large part because they are old, he suggested.

On that same visit, I talked to Chris Smith, Mariani's husband, then a part-time music instructor at IU who also played the guitar-like gittern and other ancient plucked instruments. He said Altramar involves a lot of detective work. In certain cases, as on the two-CD Iberian Garden project (which revives a unique period in Spanish medieval history when Christian, Muslim, and Jewish music intermingled), “we have gone through the process of referring to local oral traditions from the same geographic proximity,” gambling that something of the original vocal sound survives to be imitated by the authenticity-seeking band.

Don’t tell today’s xenophobic tribalists, but because early Western music was heavily Middle Eastern-influenced, the search for sources led Altramar everywhere from Ireland to the Arab world, crisscrossing religions in the process.

Altramar singer and drummer David Stattelman told me that multicultural foundation is a reminder that the traditionalistic is not necessarily primitive or insular. “A classically trained vocalist has a hard time getting through a lot of early music passages,” said Stattelman. “It’s something that requires a much different style and technique.”

It struck me on that visit that Altramar’s work sometimes bares a closer resemblance to archaeology than to the natural mentor-student relationship that usually transmits musical tradition. There’s nothing wrong with that. Tradition, like all things, should happen without violent coercion, but it may take some serious, conscious maintenance effort. As Chris Smith told me, “The urge to recreate this kind of music is a very modernist philosophical agenda.” (I know a man trying to formulate a plan to keep a theater-related book publishing company alive, if anyone wants to take on another history-preserving pet project. Neglected entities can easily fade away, but they don’t have to.)

By none of these musings do I mean to impugn the robotic, New Wave-influenced, synthesizer-filled music to which I more routinely listen. Some traditionalists—including a large portion of everyday classical music snobs—sneer at rock, electronic instruments, complex production, and other monstrous elements of the contemporary musical world, but I wouldn’t want to eliminate any of our options if we can learn to use the best they all have to offer.

Musicians’ guilds feared live music would be doomed by the advent of mechanized player pianos a century ago, after all, and that now seems a ridiculous overreaction, so I realize there must be balance. If we want humans to do the balancing rather than the machines themselves, though, we may from time to time have to do some things the hard way.