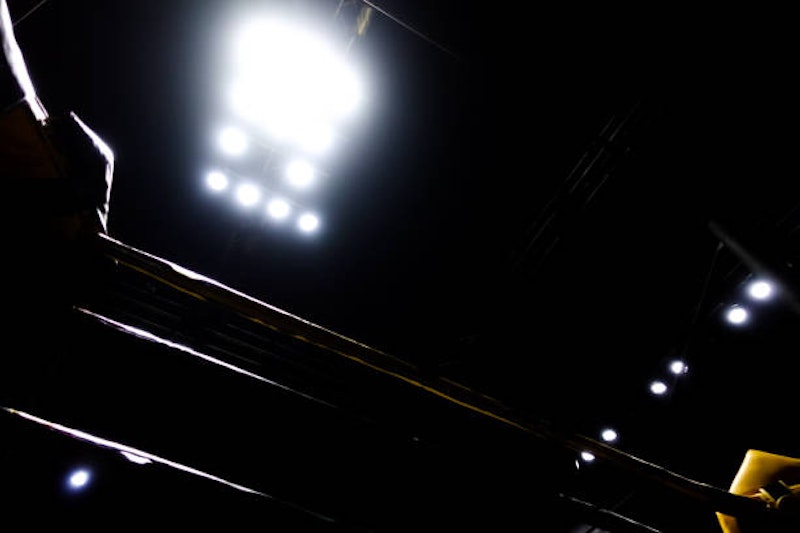 An incredibly fat, bearded man in a singlet emblazoned with a drawing of a short stack of pancakes circles a slightly less fat man in ill-fitting black trunks with the initials “KC” on them. Both men have big clumps of purple scar tissue on their foreheads and are a moving at a pace so labored that it’s almost painful to watch.

The big fat guy walks up to the less fat guy and pretends to smash him on the face with a forearm. The less fat guy falls against the wall of the steel cage, pretending to hit it, and then slumps to his knees. While on the ground, he runs a hand in which he’s concealed a razor blade across his forehead. When he gets up, he’s bleeding.

The big fat guy is taking this moment to lean against the turnbuckle, catching his breath. He’s 49 and has been doing this for over two decades. At one time, he was considered a top star, but now he’s on the downward slope of his career. The less fat guy is where the big fat guy was about a decade ago. Both of them are horribly out of shape.

The big fat guy, aware that this will probably be his last star turn in the wrestling territory, scowls at the crowd and tries to build even more heat. He walks around his fallen opponent, who’s “selling” this move as if it were a cannon-shot.

As the less fat guy continues to writhe on the ground, the big fat guy prepares for his “finisher.” He ascends the bottom turnbuckle with about as much grace as you’d expect from someone like him. He takes a few hesitant bounces and then “splashes” onto the less fat guy, somehow missing the mark by over five feet despite the fact that he was almost right on top of his opponent. The less fat guy “sells” anyway, doing his level best to look anguished.

The big fat guy—who’s managed to reinjure at least one of his knees after this botched “big splash”—tries to roll on top of the less fat guy. He attempts a pinfall so ineffective-looking that even a small child could escape from it. The referee, half in the bag due to his own failed effort at beating a same-day hangover, drops lazily to the ground and begins a very slow count.

“Wait, the Cowboy reversed it!” shrieks one of the ringside commentators, referring to the less fat guy’s decision to slip his arms on top of the big fat guy. The referee now counts 1, 2, 3 in record time, and we have a new champion!

“Have you ever seen anything this exciting before in your life? The young challenger”—“Cowboy Ken” is a mere 41 years old, after all—“is now the Canadian World’s Champion!”