The inside on the upcoming. 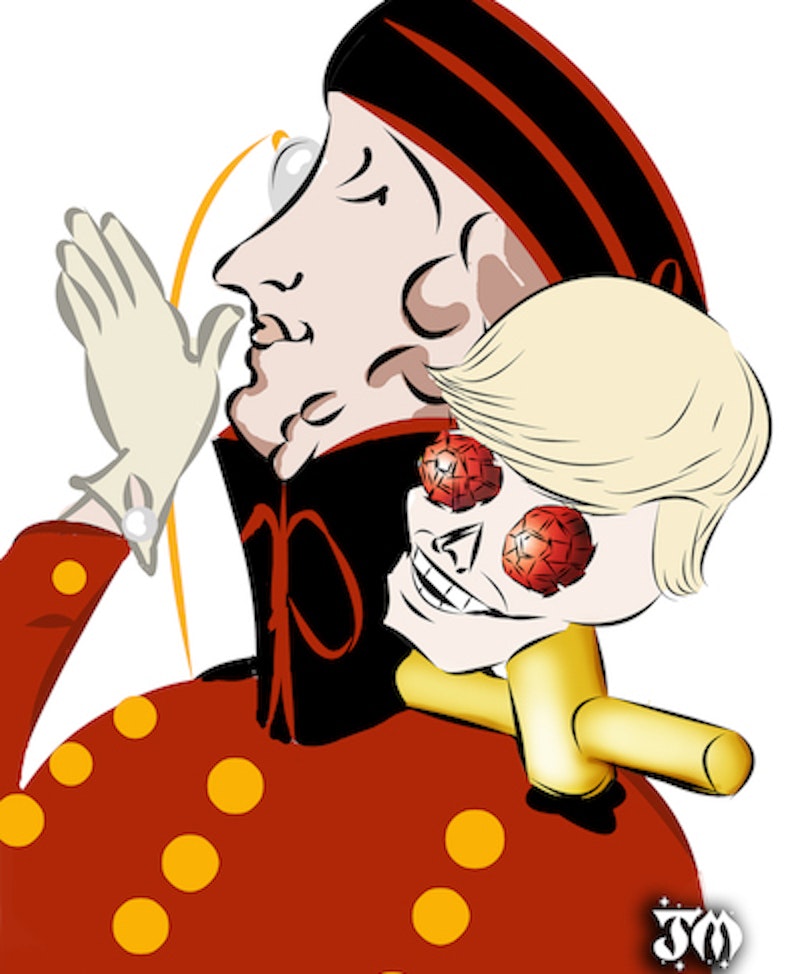 Been so much Swanky over the dam since 2016, so much President Ruby-Eyed Skull Cufflink Big as Your Head, time almost forgot the mofo of all startling revelations.

Not us though. We didn’t forget that Eustace Tilley, New Yorker magazine’s mascot boulevardier bugged out of his cozy gig, lock, stock and rent-controlled walk-up above a midtown Duane Reade, to become Swanky’s 1700 Pennsylvania doorman.

Didn’t buy our leak? Don’t believe your lying eyes? Look again. That New Yorker cover boy you still see occasionally is a body double. Replicants have come a long way since Dolly the sheep. The real Eustace Tilley has already opened more White House doors than Dolly Madison’s smile, and at last, at long last, Big La-Dee-Dah’s biggest disappointment closed a couple more and spilled the beans to us behind ‘em.

Get this. Never mind all that talk about who’s paying Kim Jong-un’s hotel bill at the North Korea summit. The serious money story is who’s paying for the buffet. And not only who’s paying, but what’s cooking, and like, is going to really be all you can eat?

Psst! The White House is in a white heat these days, and nobody’s shouting top of the world Mah-jongg, lemme tell ya.

That’s because The Oval Office fired off a buffet menu memo and staffers are running around like a bunch of suffering bastards in a desperate Hail Mary to make it happen when everybody bellies up to the Singapore sneeze guard.

As usual, Washington’s Deep State wiseguys have written off the summit as summarily as the buffet.

But hey, ya never know. Just might be some kinda nosh.

Our source Eustace T. mentioned a mountain of steak-raised Crab Rangoon. It seems Swanky had a lot of sirloin strips left over from a previous business venture, so he ploughed them back into a herd of Rangoon crabs now big as Buicks and honkin’ table-ready.

Another buffet item sure to play heavy is Attorney General Sessions’ Innocuous Chicken Dumpling, a deceptively mild potsticker, whose staying power as a buffet staple can only be explained by thousand-year-old negatives sitting pretty as a bluebird’s nest in soup at a secure location.

And don’t underestimate the power of classic buffet comforts like Pinky-Ringed Chicken Fingerlings. So bejeweled, so deep-fried, you know those wee golden digits will give Kim Jong-un the old come-hither again and again.

Will Swanky shut him off?

Eustace Tilley says no, based on a couple of years opening doors for the Ruby-Eyed Skull Cufflink Big as Your Head.

“If she were in charge, that woman would be counting every Pu-Pu Platter,” reflected the White House doorman. “She’d resent every sweet and sour pork strip packed away by Dear Leader. Please. I get sick every time I remember New Yorker office parties. There she was, frowning, fussing, slicing off pieces of sheet cake so small, they wouldn’t cover a back page ad for berets.”

With that aside, Eustace Tilley excused himself, explaining that he had many more doors to open in preparation for the summit. Godspeed E.T, we’ll keep in touch.

So Realpolitik has given way to Buffet Diplomacy. Something for everyone. Something moving in the Lo Mein. You take your chances. Henry Kissinger anticipated as much 50 years ago at the Paris peace talks with Le Duc Tho, when he used the words “modality” and “spring roll” in the same sentence.

Guess it’s all gotta play out. Uh-huh. That’s the way it is… with Orange-Flavored Swanky.