Loss, Lust, and the Democracy of Style

Over Easy by Mimi Pond is a skilled graphic-novel memoir about post-modern bohemians. 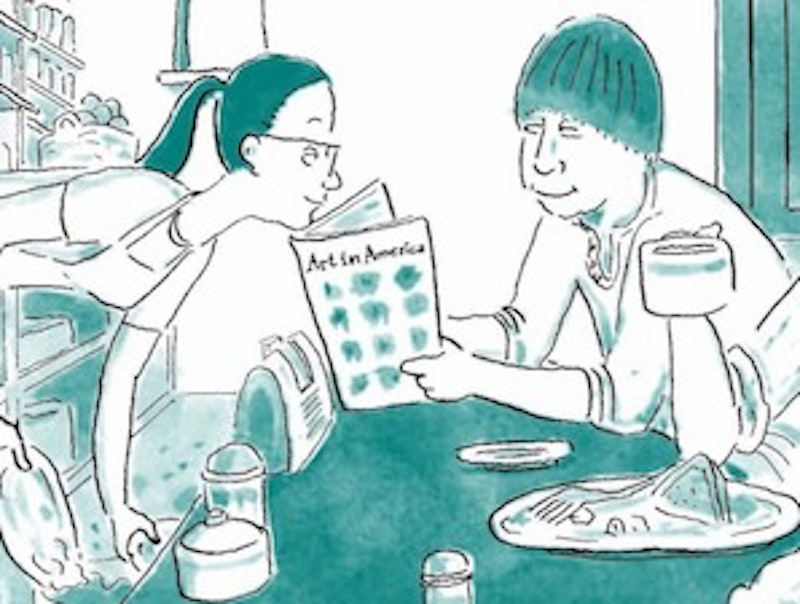 “How could I have missed noticing that Joe has such sucky taste?” Mimi Pond asks herself. Joe’s the boyfriend of the 20-year-old Mimi, and after a month or so he’s proved to be a washout. Yes, he’s great in bed and he’s talented: “He does beautiful watercolor landscapes.” Pond doesn’t mind the moon face and bowl haircut that, as she notes, make him look like little Mikey in the cereal commercial that haunted the 1970s. But the boy’s a drag. He uses tomato sauce from a jar and serves Miller High Life and plays Gerry Rafferty (“Baker Street”) on the stereo. He talks about his ex, and that’s no good either. Even so, it’s the taste faux pas that kill him. “If there is one thing that can squelch romance for me,” Pond tells us, “it’s finding out that my inamorata passionata likes cheesy music.”

Fine words for a girl from San Diego. She’s the daughter of a printed circuit technician and she didn’t quite graduate from the California College of Arts and Crafts. But she knows what passes muster and what doesn’t. Well, why not. Over Easy, Pond’s graphic-novel memoir of her long-ago self, is a skilled piece of work by somebody who watches people closely and catches what they’re about. The book created a splash on publication and will probably be read for years. It’s a loose-jointed, acute picture of a set of people and a way of life, and the people are young and their way of life involves a great deal of sex.

Kids dream of working at the cool place where the great people are and the wild things happen. Judging by Over Easy, Pond actually lived the dream. Young Mimi (or Madge, as the other characters call her) worked at the Imperial Café near downtown Oakland. This was on the edge of the Bay Area and down the street from an art school, and her time there was during the late-1970s. By this point the West’s general population had been undergoing exercises in style (long hair, short hair?) for a few decades. A spot like the Imperial was ideal for watching the results tumble by, and this style tumult is the background to the feuds and posturing and romantic flings that take up Over Easy’s foreground.

Early in the book, punk drops on the young Pond’s head at art school. Ted Falconi gives her a lecture (“Art’s dead. The whole thing is a pointless exercise”) before going off to start Flipper. Then a nice boy in the painting studio gets his hair cut and stops playing the Allman Brothers on the studio record player. “It was some crazy song playing now,” Pond writes, “somebody sneering ‘God Save the Queen.’” The nice boy has on a black t-shirt and black jeans instead of his tie-dyes and painter’s pants, and he throws out his paintings, all of which had rainbows. The paintings weren’t bad—all of them, “despite involving rainbows, were actually quite breathtaking,” Pond says—and Pond herself doesn’t become a punk. We don’t see the coming of enlightenment here. But we see a change in style starting to work its way through the population, and for Pond that shift is like a small quake. It’s an event that must be recorded, and when we read about it we’re reminded of her book’s underlying subject.

That subject is style and self-expression as the life’s blood of anybody who chooses to care about them: of waitresses who posture like Lauren Bacall, of short-order cooks who write poetry like Brautigan, of kids on scholarship at a state-run art school who decide they have to wear black jeans. Style has been democratized—not in the sense that anything is good if somebody says it is, because look at poor Joe and “Baker Street”—but in the sense that the masses now have a crack at style, just as the elite have always had. Tom Wolfe described how working-class guys created their own aesthetic with souped-up cars. That was one side of the phenomenon, and Pond’s book shows us another. Here the folks have regular culture, the approved stuff, passed before their noses and take from it what they want. Paintings of the Ashcan School flash as slides while Mimi sizes up Joe, at this point a pre-boyfriend, during an art history lecture. At the book’s close, Mimi looks at the drug store across from the cafe and thinks of Edward Hopper.

The folks also get to be artists, a job now so democratized that it’s been brought down to its nub. The waitresses and cooks and manager at the Imperial Cafe typewrite broken-line poetry and they—how does one say?—they flame. They fling their arms out and say, “Here I am, the one person the world should be paying attention to right now, because I am that special.” This habit takes the form of soul-baring, as with the poetry night that ends the book, and of having a special prance to show off on the way to the cash register: “A man nimbly twirls himself behind the counter and over to the register. That turned out to be a distinctively Lazlo-like dip and twirl he’d do.” The man in question has a fedora and a beard, and he calls himself Lazlo Merengue. Is any of this bearable? I found it very much so. Maybe the distance helps; so does getting the flamers’ greatest hits instead of living with the bunch day-to-day.

Certainly Pond works with a lot of craft and intelligence to produce a book that tells things well, that seizes on the details of work, love, and general behavior and gets them across with adroit page layouts and painstaking line drawings. As a cartoonist Pond is hobbled by drawing people as tubes with thumbs on top them; I mean that arms, legs, and torsos don’t seem to be her thing, and that the faces have way too much forehead. One must bear down to tell waitress Helen apart from waitress Martha. Even so the book hums along, and many of the drawings have a poignance that comes from how they’ve been labored over and how long ago their subjects are. In her Imperial days, Pond sketched in her notebooks and wondered if she’d become an artist, and now the notebooks have been dug out so we can see the Imperial’s interior and the look of its coffee cups and the intersection at McArthur and Moss.

Oakland, as she draws it, is a city notable for its left-overs: the Art Deco office buildings downtown, the empty water towers that dot the city’s backyard, the “falling-down Victorian bungalow” where Pond lives. “The house is in a state of decay that is still romantic, before it hits desperation,” we’re told. “Almost everyone I know lives in a house like this.” Inside we dig her ice box with the piano legs. “None of the appliances are less than fifty years old,” a caption says. A page here offers a tone poem on time and the drawing of small things: “In the old houses, you will find, on old paint-flaked windowsills... tiny bronze hands... dried rosebuds... crystals... dead butterflies... heart-shaped rocks... old medicine bottles... mysterious daguerreotypes... ”

It’s a beautifully composed comic-book meditation that would be unbearably arch as a movie sequence with voiceover and still shots. It’s also a reminder that the book’s characters are children living in ruins, having a good time before they die. They lived their art as the old culture went phosphorescent with age, and now they’re gone or they’re sitting by a TV. But Mimi Pond captured them as they were long ago. As a result we have this highly democratic art product, a hard-bound comic book that feels like a movie of the French New Wave and tells us about love, style, foolishness, and how nothing lasts.