How to Represent a Mountain

A stone is a very small mountain, and a mountain is a very large stone. 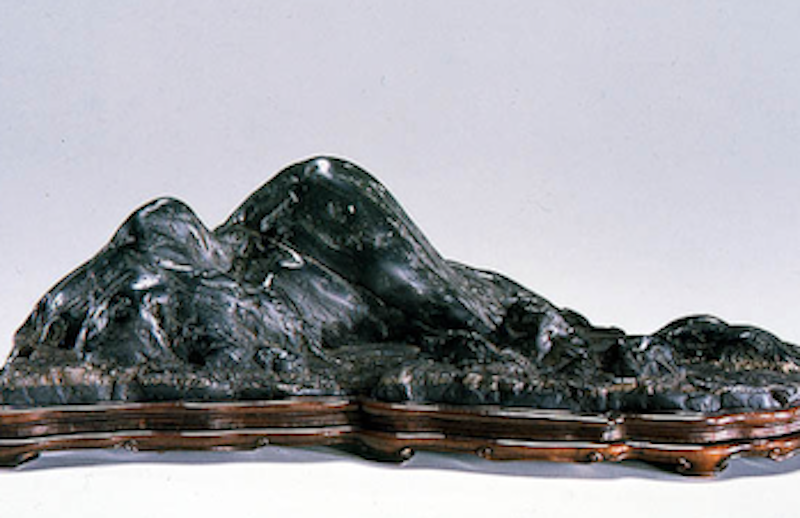 There are not many occasions when my particular hobby/art/obsession gets a "news hook" that yields an excuse/occasion to write about it for an audience broader than a few enthusiasts. I collect rocks: not amazing crystals or pure mineral samples, but what the Japanese call “suiseki,” the Koreans “suseok.” These are natural stones that take the form of landscapes and mountains. Such a stone puts in an appearance in Parasite, the Korean film that won Cannes this year. In fact, the blessed or cursed landscape stone may drive the film's events. Presented to the main character as a charm to bring prosperity, it ends up being a weapon. My experience of landscape stones hasn't been that sort of blessing or curse, overall, but it's been meaningful.

The attempt to figure out the relation between representations and reality, pictures and real things, goes back in the Western tradition to Plato, who said that pictures were imitations of the real world and described art as a mirror of reality. A picture of a person, for example, is (of course) not a person, and it’s not as real as a person; Plato ended up more or less condemning art, including sculpture, poetry, music, and drama, as mere imitation, as a way we lose reality. It's as though we live in a movie theater (or in a cave with shadows flickering on the wall), when we should be seeking reality and truth rather than mere images. What Plato would say of us now, absorbed more and more by pictures on screens, isn’t hard to imagine.

Landscape stones, and other Asian (particularly Japanese) arts such as bonsai trees and ikebana flower arrangements are representational arts in some broad sense, but they present a different relation between picture and reality, art and world.

Compare a picture of a mountain (for example, one by Cezanne, who was famously obsessed with Mont Sainte-Victoire) to a suiseki landscape stone. Suiseki are “natural” stones; they’re found rather than made. One of the few permissible direct alterations is the (somewhat controversial) practice of cutting the bottom flat. And yet the processes by which such stones are cleaned, handled, and displayed are very elaborate. The contexts of display—on a wooden daiza platform or ceramic suiban tray, often on a low table and in a tokonoma niche, with a pictorial or calligraphic scroll—are where much of what we might think of as the artistry proper, and certainly the craft, occurs.

In the limited literature on suiseki that’s been translated from Japanese and Korean into English, celebrated stones are often described as though they were pictures: it might be said that a particular stone captures, represents, suggests, embodies, or even depicts a mountain range at dawn, in early spring. When Cezanne represented Sainte-Victoire, he did it in an entirely different way: he set up a blank canvas, gazed at the mountain, made a mark, and slowly tried to get that flat surface to correspond to that bit of the world, or his experience of it. He created it in a conscious process of correspondence, though also of personal expression.

Cezanne's painting and Mont Sainte-Victoire, though they might both be physical objects, are very different: one is flat, the other isn't; one is made of paint, the other isn't; one is consciously and intentionally created by a person, the other isn't. All of these elements help create a distance between picture and object that allows us to appreciate the work as more than merely a particular physical object. This also corresponds to a dominant theory about "aesthetic experience" in the Western tradition: that experiencing art properly requires "distance" from ordinary concerns and objects, that we appreciate something different than and perhaps higher than what we experience with regard to ordinary objects: the work of art is creative and formal as well as a reflective or representational. It's human rather than natural.

But a stone is actually a very small mountain, and a mountain is a very large stone. There ought to be no temptation to identify a difference of ontological level between a suiseki artwork "depicting" Mount Fuji and Fuji. The stone is a lot smaller than the mountain, but they are, as palpably as you please, the very same sort of thing.

Finding and displaying landscape stones is partly a matter of the sort of devoted making that a painter or sculptor might pursue, and it’s partly more like the activity of a naturalist, devoted to careful observation and elucidation of natural things. It’s often said that Picasso changed the way people see the world. I’m skeptical about that. But the point of suiseki might be described as seeing what’s already there with more attentiveness.

Asian landscape stones are not “creations” in the way we imagine great Western works of art, emerging from the hyper-intense individual consciousness of the artist. Every aspect of the process, rather, is devoted to coming into relation to the stone through intensive attention. I've come to the conclusion, by looking hard at thousands, that no rock is a perfect suiseki; that's because they are what they are and not what I want them to be.

I do interpret these arts as constituting an alternative to Western representational practices, but I also think that they provide an implicit critique of Western theories of human experience, because they resist the sort of split of perception from reality on which those views depend. Landscape stones show, concretely, that a representation and what it's a representation of aren’t necessarily different. They re-integrate human representational activities and human perception into the pre-existing order of the world. They collapse the aesthetic distance, or show that it was never there in the first place.

And that opens up the possibility of rethinking Western pictorial practices and theories of perception. If we started out by considering a picture as physical (even if made of pixels of light, for example), we could start to think about the relation of the human mind to the world we inhabit as a relation between two things of basically the same sort. A painting, like a human brain, is no less a physical thing among physical things than is a stone. We are ourselves natural objects, flesh landscapes.

Perhaps we should think of the arts, there or here, as ways we connect with the world and participate in its becoming, rather than ways of standing back and observing at a distance. We aren’t creating our world by perception, and we aren’t remaking our perception by our arts, except very slowly and in collaboration with the world we perceive. I fell in love with landscape stones just because I thought they looked amazing and wanted to keep experiencing them. But what I found is that I was seduced out of my imaginary isolation and my alleged human distinctness, and into multiple modes of connection with the world around me.

Really, I like best to see rocks out on a hill or in a creek, but take some of them home anyway, and some of those I learn over a period of years, by vision and by touch. I always thought this experience wasn’t much like seeing a Picasso in a museum. But the Picasso too is an integral physical object; the museum too is a physical environment.

Cursed or blessed, murder weapon or work of art or natural object, landscape stones like the one in Parasite show that we, too, are natural things.