I Don’t Want to Sell My Wife, But I Have To

My editors are blackmailing me, so I’m fattening Monica up. 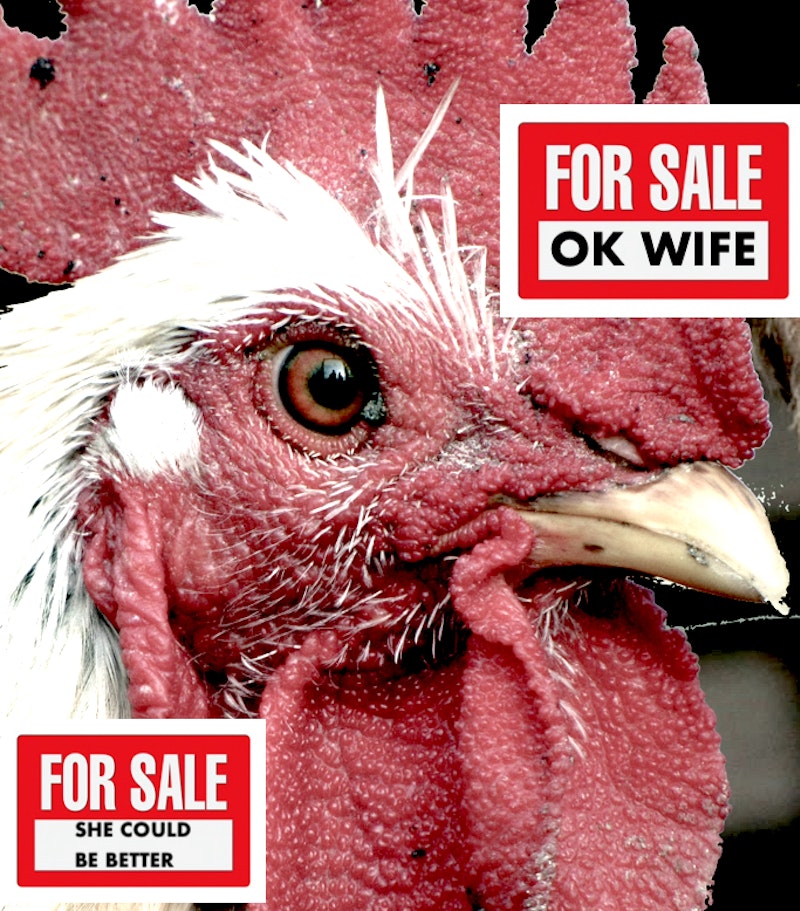 How could I have said it? Never again, the officer told him. No, I was all blacked out. Help me out. The beginning of a story should always start in an apartment, a man, his girl, and a gun… these are things told to me by people of my past. I know them no longer. But we exchange tangents on the outside—between spaces and cement—when we can afford to go to bed. Work is more aggressive than ever. I haven’t had a shower in three or four weeks, but feeling fulfilled. I’m fed, I’m housed, I’m warm, and I’m comfortable. I have these things guaranteed for me because I live in a civilized society. I live in a society that has an extensive social services system that allows people to, as Marx said, solve their human problems now that their animal problems have been taken care of (that’s a paraphrase—I just read his “Little Red Book” on the plane yesterday at Teterboro).

As Emma would say I find that I require a bouillon of hot sausage. No—a purchase of fork brought from the bowels of whales in the Potomac. Sorry, I’m sounding too beatnik for Halloween, I can’t get the image of William Burroughs sucking off the stump of Kurt Cobain’s lifeless body in that demolished greenhouse that once stood in Seattle, Washington. A man played R.E.M.’s Automatic for the People and died. Let’s just say we don’t know how. (I might but this is none of your concern. However, bribery inquests can be forwarded to the inbox of Twitter user @BenningtonQuibb). I’ve never had a hot dog but I am willing to try anything once. Indeed, just last week I was asked by my editor to sell my wife.

Yes: in order to keep my novel on the schedule for 2020, I’m being blackmailed by my editors at Random House. They want my wife; they want my Monica. They don’t know that I’ve already been fattening her up for the long winter ahead. Yes, she’s still addicted to that goddamn VR machine, yes the doctors say she has “irreversible brain damage,” and yes she’s lost all of her most basic faculties so you could say she’s a handful or two. But I don’t trust misanthropes. I’m a romantic, and gullible at that, so I must always steel myself against the grifter’s guise. This one was too crass, though. I’m not going to sell my wife.

But I could be persuaded. Why not? We’ve already been commodified for millennia. Is it so offensive and shocking when a rooster sells a hen only because the rooster is usurping the human’s dominant role in an exchange? Quite possibly. It’s of no concern whether or not I want to sell my wife to anyone but me, her, and the buyer. You may call me cruel and unusual. I’d say that any system that forces one into abjection and necessitates a situation in which the individual is not merely persuaded into selling his wife but is indeed required to do so. So I’m selling my wife to make a point about industrialized society and its effects.

A wise man once said, “Fear eats the soul.” That same man also wrote that “Happiness is not always fun.” The long arc of history can’t be avoided or reversed. We’re approaching a red socialist/communist wave in America and the outcome is anyone’s guess. We’re still using 20th-century references for 21st-century situations. “Seizing the means of production” isn’t as cut and dry when the means and the assets are stored in the Cloud. So when my friend Biker (he’s a teacher, therefore a prole) accuses me of “political dilettantism” and “perpetuating bourgeois notions of the noble savage,” I question his assumption that I’m a savage, let alone noble. No: I’m a portrait in courage. I’m willing to sell my invalid wife just so that my wonderful career as an author can continue unimpeded. Would you not do the same?