Everyone is nobody, people suck, nothing matters. 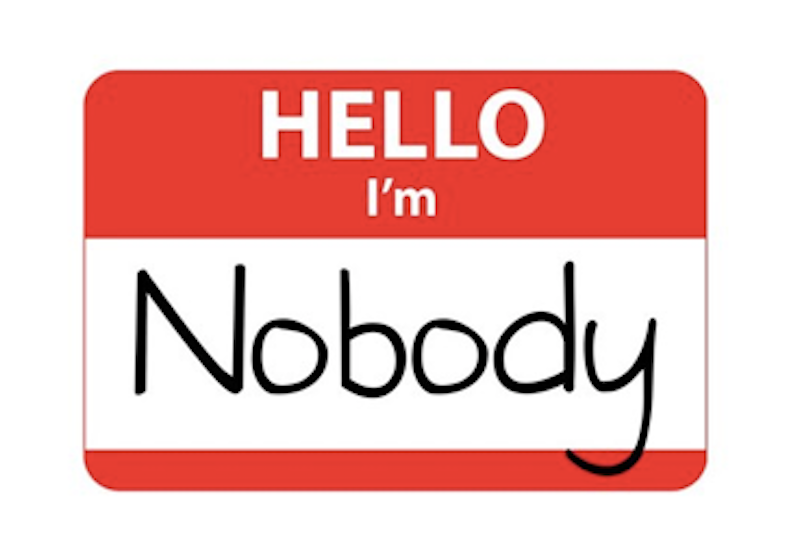 Years ago, I worked in the White House. I was a volunteer on the Health Care Task Force very early in the Clinton administration. I still have some memorabilia from that time—a birthday card from the Clintons, White House M&Ms (they’re stale), photos of meeting Al Gore at the Easter Egg roll on the White House lawn… but my favorite is a name tag that must’ve been made as a joke by a new staffer. It was plain and white, with a simple blue “The White House” logo at the bottom—where a name would normally appear it reads “Hi! I’m Nobody!”

It made sense that in the chaos of those early administration days, young volunteers and new staffers were grabbing up these contraband unofficial White House name tags for both humor and collectability. Mine remains a favorite not only for its tongue-in-cheek jab at the importance of all the higher powers normally walking the halls of the (then named) Old Executive Office Building, but also for its larger reminder: we are all really nobody.

No one is more important than anyone else. I’ve noticed that when people call you out for certain things, it’s often a projection of their own flaws. This might be my bachelor’s degree in psychology talking, the one my Mom says I never used but really use every day just dealing with the mental health challenges in our own family including my own, or perhaps it’s a journalist’s eye for detail. But I notice things when it comes to people and behaviors. Just like with sea glass, there are two types of people: genuine and fake—at times it can be difficult to tell the difference between them, but there are ways.

The past week was terrible for me. We all have them, I’m not crying victim about it—we have to say that nowadays, because if you complain, someone gaslights you about your “victim narrative.” “Victim narratives” and “gaslighting” are concepts we talk about because Millennials primarily run social media. As a Gen Xer, I’d observe that I had a fucking shitty week, not that I believe it was a worse week than someone else had. Projection example: people who say you “make things about you” are often the ones who tend to make things about themselves. And sometimes when people complain about being “victimized” by narcissistic abuse and manipulation, they might be familiar with the concept because they themselves are the ones dishing it out-- not to "victim blame," but shitty behavior can really be contagious I guess, and pop psych concepts can be twisted in unending ways.

For the first time in my 30-year journalism career, I was fired from a position because of something I wrote. While tempting to go into the details, I hesitate because I’ll be accused of crying “victim narrative.” Although I feel a certain responsibility to defend myself in circumstances that were considered by some to be unjustified, whatever I say has a chance of being seen in some sort of “sore loser” light. I’ll keep my thoughts to a bare minimum, and reserve the majority of them for the beachcombing memoir I’ve been working on for ages and that I now have more time for since I no longer hold the volunteer position at (let’s just call it) “the castle.”

People have told me this was a witch hunt. If they were looking for a witch, they found me. I’ve been called worse and adore the outfits. With no leash, I feel freer. (Insert Broadway lyrics from Wicked’s “Defy Gravity”…“As someone told me lately, everyone deserves a chance to fly… and if I’m flying solo, at least I’m flying free…”). I wrote an article defending genuine sea glass and passionately stated my hatred for fake sea glass—these types of issues are in my wheelhouse and I’ve written many articles on beachcombing historically. The manner and style in which I chose to express myself were deemed scandalous by the castle, which has the Neptune-given right to oust me and took the opportunity. Just because they could didn’t necessarily mean they should. I had a long history of serving the castle well as a faithful servant. Although I’ve never been dismissed for my writing, this isn’t the first time my outspoken communication style has landed me in hot water. I take responsibility for my opinionated writing. I don’t regret standing up for the original mission of the glass-walled castle over what I think has become a darker purpose—commercialism, greed and a focus on an almighty annual event versus education, which I can now remain focused on here at the beachcombing nonprofit museum.

In my personal life, a few catastrophic things took place that tweaked my challenges as someone who suffers from Borderline Personality Disorder, including some major social anxiety interactions and dealing with losing my closest friend in an abandonment situation; our worst fear in managing this condition. People suck, and sometimes they’re shitty at a very shitty time. We all have bad weeks, this one was just extra terrible and I’ve spent my life oversharing for a living. This is why I have few friends, am reclusive and have trust issues—so many people are incredibly disappointing. My therapist was out of town and by the time she returns this week I should pay her in cases of vodka because the copay will not cover what she’ll be facing.

The worst thing that happened was finding out I have to move out of my cottage on the island. Those of you who’ve read my writing over the years know I’m deeply connected to my waterfront cottage. It started as a writing cottage back when I completed three novels here on the island, then briefly morphed into the birthplace of my candlemaking studio before I moved to The Beach Bank where my shop and Beachcombing Center museum are now. I’ve posted so many sunrise photos, a “beachcombing in pajamas” series, written and read books, and enjoyed many hours with friends on its porch. No fault of the cottage owners, they simply have family moving in so it’s not personal. I’m looking but don’t know what I’ll be able to find near my museum/candle shop as places to live are scarce on the island. There’s a lot of sea glass to pack up. The museum building doesn’t have storage so I’ve housed a lot of the collection at the cottage.

I’m stressed, depressed and my nerves are frayed at the edges. Some folks have contributed to making the past week more stressful for me than it needed to be, and the limits of my mental health have been strained to the outer capacity. Not to get dark about it, but it has been very dark. I’ve utilized a lot of learned skills. On the flip side of people I cared about abandoning me hurtfully, I’ve reached out to people who’ve been helpful and given me perspective and I’m grateful. I’ve said this before: you never know how much your words may have an impact on someone at a crucial time.

My work over the past decade in the beachcombing community is respected by many. I’ve given my time, without expectation for reward, and with passion. I’ve been honored to help people both in person and online learn more about beach finds, and am thankful to the organizers of my remaining four festivals this year for welcoming me despite the drama in which my real-life career intersected my life’s hobby. I can’t sacrifice one for the other; I’ve been writing since Sister Nancy gave me an Outstanding Writing award four decades ago and not long after that, started getting paid by football players to write their papers, eventually getting paid to write for and edit newspapers and magazines. It’s what I do.

There have always been those who don’t like my style. Over time, I’ve been blocked or unfollowed on social media and gotten upset or taken it personally when sometimes it might be more about the other person than me, and even if it is about me, who cares? None of this social media shit matters in the long run- a lesson it has taken me some time to learn.

None of the castle shit matters either. Was it humiliating? Yes, just like they wanted it to be, but not for long-- it helped speaking to castle survivors who reminded me I’m in far more of a cool kids club now than I was while inside the moat. I’m free. There’s freedom of the press on this side, plenty of beaches, no more “bored” meetings about pipe and drape tablecloths... and the comfort of knowing that just like everyone else, I’ll always proudly wear a nametag that says “Hi, I’m Nobody.”

—Find more beachcombing articles by Mary McCarthy or follow her on social media.