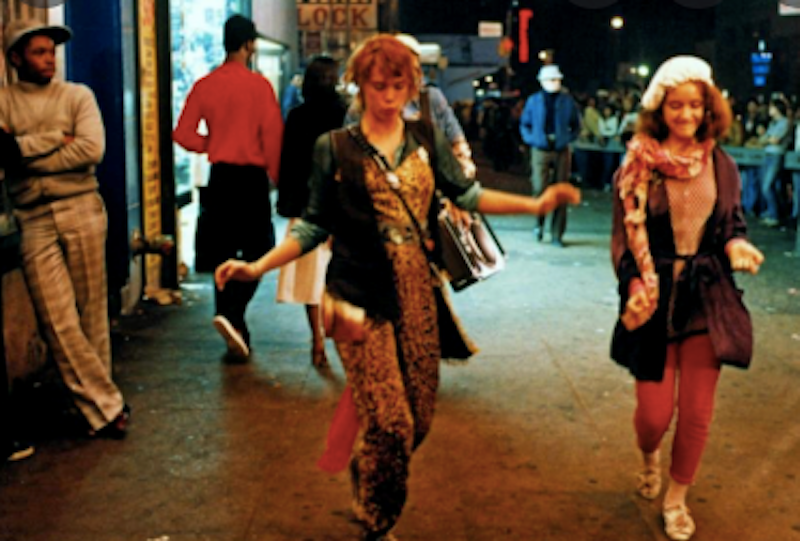 Times Square, a film released in 1980, now a cult classic, was recently reissued on Blu-ray. Viewed on Kino Lorber’s beautiful new transfer, the movie’s a time capsule of New York in the early-1980s and a parable about the liberating power of rock ‘n’ roll.

The story centers around two young teenage girls, Nicky Marotta (Robin Johnson) and Pamela Pearl (Trini Alvarado). Nicky’s a rock and roller, street smart and foul-mouthed. Pamela’s the daughter of a city commissioner whose job is to clean up Times Square. The girls meet when both have been sent to a psychiatric hospital with anxiety and mental issues. Unhappy with the care, they escape and hide in an abandoned warehouse by the Hudson River. At night they run wild through the bars, strip clubs and rock clubs of Koch-era New York.

Pam and Nicky become citywide celebrities thanks to the disc jockey named Johnny LaGuardia (a great, underused Tim Curry), who advertises their story on his late-night show. As a citywide search takes place, Nicky and Pam form their own band, the Sleez Sisters. At the climax of the movie, they perform on the top of a theater marquee to a mob of manic fans.

This is a classic fuck-the-man rock ‘n’ roll movie, but there’s a lot more going on. The most obvious is that Times Square is a gay love story. Or maybe it’s a love story between two young people of the same sex who aren’t sexually active yet. “It’s not gay, it’s pre-gay,” director Moyle says in the commentary track to the new Blu-ray. “It’s two young people falling in love. My idea was that if they were older they would be gay.”

Yet because the producer of Times Square, Robert Stigwood, saw the film’s tone as more like his recent mainstream success, Saturday Night Fever, than a raw indie project, any scenes indicating that Pam and Nicky were in love were cut. This was disastrous. Early in the movie there’s an abrupt transition where Pam and Nicky’s hair suddenly is a different color and their wardrobes have changed, with each girl wearing items that once belonged to the other. As actress Robin Johnson explains in the audio track, a scene where the girls, having just escaped the psychiatric ward, henna each other’s hair and exchange small items of clothing was cut. It was a vital piece of connecting tissue.

The new reissue features two great audio commentary tracks, one by Moyle and Johnson, the other by cultural critics Kat Ellinger and Heather Drain. Ellinger and Drain are particularly strong here, exploring how, in Ellinger’s description, this is a film that “explored the idea of music as a kind of catharsis for young people that gives young people a sense of voice, and sense power over their now lives.” For a lot of us in the late-1970s and early-80s, rock ‘n’ roll was life-saving, and the soundtrack to Times Square is incredible: Talking Heads (“Life During Wartime”); Patti Smith (“Pissing in a River”); the Pretenders (“Talk of the Town”); the Cure (“Grinding Halt”); Suzi Quatro (“Rock Hard”); XTC (”Take This Town”); Gary Numan (”Down in the Park”); and the Ramones (“I Wanna Be Sedated”).

The fantastic Roxy Music song “Same Old Scene” opens the film. It’s one of the great curtain-risings to any rock ‘n’ roll movie, conveying the passion of the music and the glamour and honesty of defiant youth. It establishes Nicky as tough, talented, sexy and charismatic, but in an unconventional, raw and punk way—as Heather Drain notes, Nicky walks a bit like Richard III. Drain also observes that Times Square, like other 1980s films, depicted the thrill-seeking of teens in the 1970s and into the Reagan era: “This idea of being a teenager and wanting that danger—of being a teenager and wanting the freedom of that danger. It seemed exciting. After the 1980s and the clearing up pf everything, the nature of teen hood changed dramatically. It was once normal for young kids and teens to be running around at night or going to clubs. Kids couldn’t wait to grow up and get involved in this adult world.”