For me, "getting out of town for a while" means an afternoon in Jersey City. 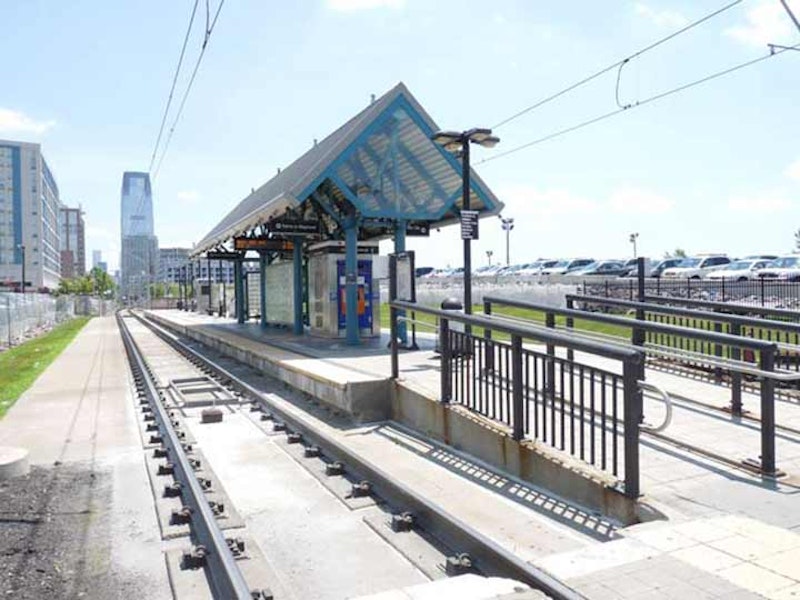 I felt like getting out of town for a while. For me, that means an afternoon in a place like Jersey City. I try to sneak out of town to Hoboken or Jersey City at least one or twice per year. Each town resembles New York City so much, aside from the things like street signs and lampposts, that I’m not really leaving town at all. It’s easy getting to the New Jersey towns closest to New York. The PATH train runs as a shadow subway, providing alternate service on 6th Ave. for a quarter less than MTA fares. And, that $2.75 will get you to Newark on one fare if you want to go that far.

Despite its name, Hudson-Bergen Light Rail doesn’t go to Bergen County, though NJ Transit, its parent, intends for service to get that far north eventually. At the present it runs from southern Bayonne north to Tonelle Ave. in West New York, NJ, with a branch here and there.

The HBLR is the light rail, or trolley, system that New York City transit buffs can only dream of. For much of its run it lives in its own right of way built along pre-existing railroad tracks. In downtown Jersey City it runs down the middle of some streets. Trolleys had vanished from most NYC streets by the early-1950s, as cars and buses were considered the future, and generally speaking, once something is taken out of service in NYC it doesn’t come back, no matter how much spluttering about the Rockaway Branch here or the Staten Island Railway North Shore Branch there should be reactivated for light rail. It won’t happen, but happen it did in New Jersey, and it rolls along in Boston, Baltimore, San Francisco and plenty of other towns.

Above is the Jersey Ave. station, serving the Van Vorst Park section of Jersey City, which sits just to the west of the downtown skyscraper neighborhood which contains the Goldman Sachs Building, NJ’s tallest, seen in the background in the photo. It’s a neighborhood of 19th-century brownstone and frame buildings that resembles large swaths of Brooklyn that I’ve invaded through the years. 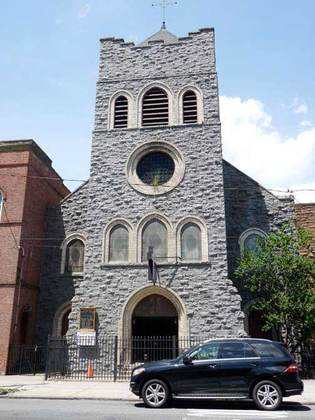 New Bethel Baptist Church, 445 Jersey Avenue between Bright and York. The building was formerly known as St. Mark’s Hall. A listing in Pitman’s Journal of Commercial Education, December 16, 1899, reads: “An introductory lecture on Shorthand and Typewriting, illustrated with lantern slides, was given by Mr. Foster…before a very appreciative audience.” Isaac Pitman developed the shorthand method of writing, which among other things, enabled secretaries to take dictation at greater speeds than previously. “Lantern slides” were the predecessor of slide shows, today’s Powerpoint and Keynote presentations. 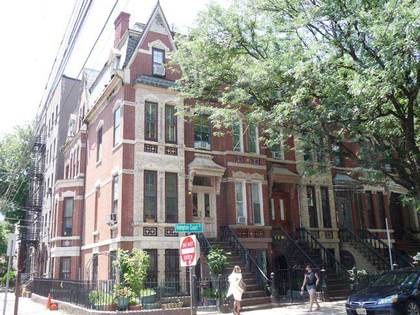 Two 19th-century developments consisting of multiple buildings in Van Vorst Park are known by a collective name and have their own house numbering independent of the numbering of the street they are located on. The southeast corner of Barrow and Wayne Sts. is known as Hampton Court and the individual houses are numbered #1 to #7. Built around 1890, the architect larded on Victorian-era bric-a-brac such as peaked gables, decorative tile panels and slanted mansard roofs. The needle-shaped windows impart a Hansel and Gretel touch. 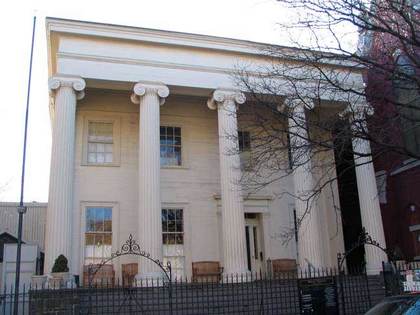 The oldest building in Van Vorst Park is the Barrow Mansion (it was owned early on by Dr. William Barrow, for whom Barrow Street is named) at 83 Wayne St.. My sources vary on when this Ionic-columned masterpiece was built. The National Register of Historic Places says 1834 but the City of Jersey City website claims it for the 1840s. The building formerly had a twin further west on the block on the other side of St. Matthew’s German Lutheran Church. Both were built by the same Cornelius Van Vorst who later became Jersey City mayor. The twin was demolished in the 1920s for an apartment building. 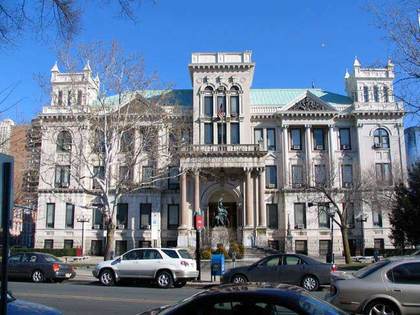 The City Hall of Jersey City, east side of Grove St. between Mercer and Montgomery, is impressive. It was designed by the architect Lewis H. Broome (1849-1927) and completed in 1896. Tastes change. When The Jersey City Hall was completed, the Architectural Record called the Beaux Arts structure “vile,” adding that it “fairly reeks of vulgarity.” When first built the edifice had three huge brass cupolas, but they were removed in 1955 lest they became unstable. City Hall was hit by a devastating fire in 1979. In the 1980s, Anna Cucci, wife of then-Jersey City mayor Anthony Cucci, was an arts patron and spurred a restoration effort that netted $300,000, and City Hall was completely rebuilt outside and in, with the work finished in 2004. Anna Cucci perished while visiting Cusco, Peru in 1988 when a tour train on which she was traveling derailed and plunged 700 feet into a ravine. Sabotage on the part of the Shining Path terrorists was suspected. Copper friezes on the Grove St. side depict figures garbed in classical and medieval-era outfits engaged in mechanical and agricultural work. 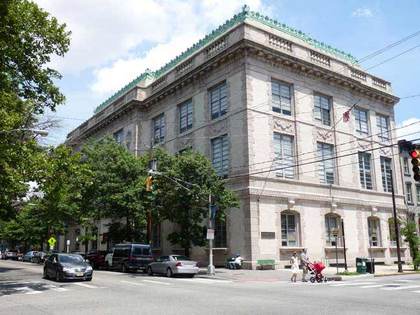 The Jersey City Free Public Library Main Building facing Jersey Ave. between Montgomery and Mercer Sts. was completed in 1901 in an Italian Renaissance style by Brite and Bacon. Philip Martiny (see above) designed the head of Minerva and the seals of Hudson County and Jersey City that appear over the front entrance and flanking windows. Jersey City’s public library was established in 1884 and occupied several buildings before constructing a permanent home here. 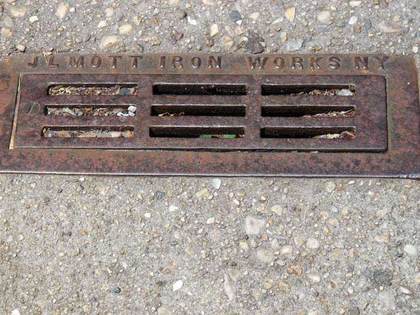 A sidewalk vent at Barrow and Montgomery made by the J.L. Mott Iron Works.

Entrepreneur Jordan Mott built a tremendously successful iron works in the south Bronx beginning in 1828, centered along the Harlem River from about 3rd Avenue to E. 138th St. His handiwork can be still seen on airshaft and manhole covers built by the Mott Iron Works. Mott had bought the original property from Gouverneur Morris II in 1849; Morris was asked if he minded if the area was called Mott Haven, a name it had quickly acquired. “I don’t care… while [Mott] is about it, he might as well change the Harlem River to the Jordan.” The iron works produced practical and ornamental metalwork used worldwide.

In 1850, Mott drew up plans for the lower part of the Mott Haven Canal, which followed an underground stream parallel to Morris Ave. and east of the Harlem River. When completed, it enabled canal boats using the canal to go up as far as 138th St., encouraging the local industrial development. It has since been filled in. Residential neighborhoods, such as the one which forms the Mott Haven Historic District, aren’t common in Mott Haven. After 1856, Mott Haven joined with several other villages to form the town of Morrisania, although the area still continues to be known by its original name. The iron works were in the south Bronx until 1906. 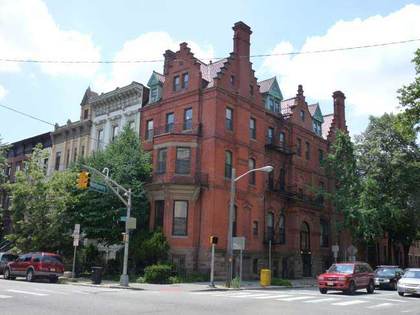 This is the Ward-Heppenheimer Mansion, Jersey Ave. and Montgomery, catercorner to the library. It was designed by architect Frederick Clarke Withers and built in 1884 for its original owner John Ward. Its stepped gables and prominent chimneys mark its Flemish Revival style. In 1893 it was purchased by “General” William Christian Heppenheimer, who had a lengthy New Jersey political career. He was elected to the New Jersey Assembly, representing the Fourth District in 1887 and 1889, and became speaker of the New Jersey Assembly in 1890. During the 1890s he served consecutively as Comptroller of the Treasury of the State of New Jersey, President of the Board of Finance of Jersey City, and City Treasurer. In 1928 Governor A. Harry Moore appointed him as a member of the Port of New York Authority, later Port Authority of New York and New Jersey, which he served to 1933. Heppenheimer played host to political and sports figures in the mansion such as four-time presidential candidate William Jennings Bryan and boxing champ Jack Dempsey. 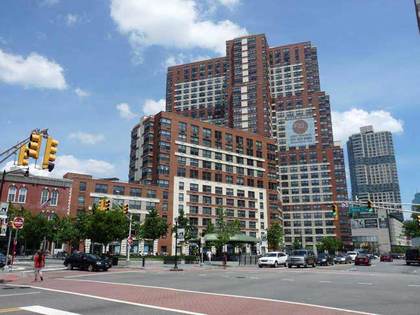