The writer was no stranger to illness. 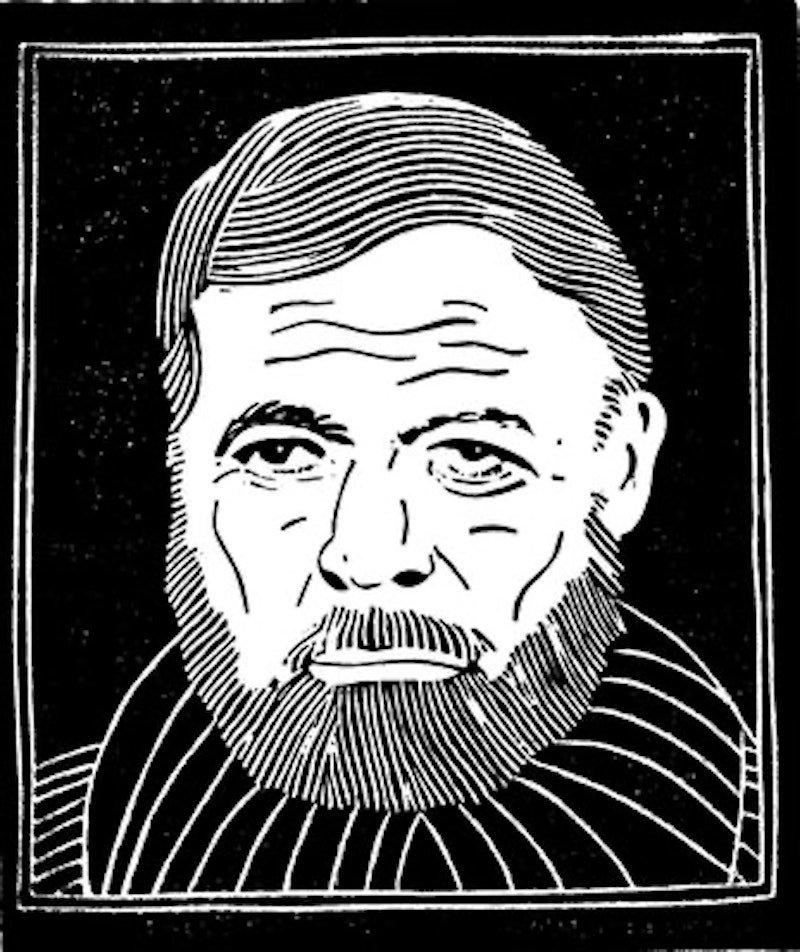 In 1954, Ernest Hemingway took his fourth wife Mary Welsh to Africa. He chartered a sightseeing plane to show her the Belgian Congo and the glorious Murchison Falls. While flying low over the trees, the plane struck a utility pole and crash-landed in heavy brush. Hemingway suffered a concussion. His wife broke two ribs.

That night they camped in the bush waiting for a response to their distress call. A passing plane saw the crash and reported no survivors. Word spread around the world that Hemingway was dead. The next day, Hemingway and his wife were found and picked up by a bush pilot. Amazingly, the second plane caught fire and exploded during takeoff. Hemingway slammed his upper body and head against the exit door to escape. He suffered burns and a concussion severe enough to cause leaking cerebral fluid.

The injured travelers were taken by road to an Entebbe hospital. Hemingway joked with journalists and spent weeks recuperating and reading his erroneous obituaries. Restless and bored, he left the hospital and took Mary and his son Patrick on a fishing trip to Kenya. A bushfire broke out and Hemingway fell into the fire to help extinguish the flames. He suffered burns on his legs, torso, lips and arms. He was ultimately diagnosed with two crushed vertebra, a ruptured liver and spleen and a broken skull.

Hemingway was no stranger to accidents and illness. In 1918 he enlisted as a World War I ambulance driver on the Italian front. While bringing chocolate and cigarettes to the front line he was struck by mortar fire. Despite serious shrapnel wounds to both legs, he carried an Italian soldier to safety earning him the Italian Silver Medal of Bravery. He underwent an operation and spent six months recuperating.

In 1927 while honeymooning in France with his second wife Pauline Pfeiffer, Hemingway contracted Anthrax. A few months later in Paris, he pulled a skylight down on his head thinking it was a toilet chain. This left him with a permanent scar on his forehead. In the early 1930s, Hemingway took writer John Dos Passos elk hunting in Montana. After dropping off Dos Passos at the train station, Hemingway crashed his car and broke an arm. The surgeon bound the bone with kangaroo tendon. He was hospitalized for two months and it took more than a year for the nerves in his writing hand to heal.

In 1933, Hemingway and Pauline went on safari to East Africa. The trip would inspire Hemingway's short story “The Snows of Kilimanjaro” and his collection Green Hills of Africa. The trip also gave Hemingway a bout of amoebic dysentery causing a prolapsed intestine. He was evacuated by plane to a Nairobi hospital.

In 1944 while in London to write about World War II, Hemingway was involved in another car accident. He suffered a concussion and a head wound requiring 50 stitches. He traveled to Normandy with a head bandage to witness the D-Day landing. He also found himself under fire at the Battle of the Bulge. The stress caused him to be hospitalized with pneumonia.

In 1945 he returned to Key West, Florida. Guilty about his failed marriage to third wife Martha Gellhorn, he began drinking heavily. One night after too many daiquiris, he had another car accident, smashing his knee and suffering the third of many concussions.

Hemingway fell into a deep depression as his literary friends began to die. He'd lost W.B. Yeats in 1939, Scott Fitzgerald in 1940 and Sherwood Anderson and James Joyce in 1941. Gertrude Stein died in 1946 and his long-time Scribner's editor Max Perkins died in 1947. Hemingway began to suffer headaches, weight problems and tinnitus. He was subsequently diagnosed with diabetes.

From late 1955 to early 1956, Hemingway was bedridden. His doctors urged him to stop drinking to heal his damaged liver. He disregarded the advice, became ill and was treated for high-blood pressure and arteriosclerosis. By 1959, Hemingway was having trouble organizing his thoughts. Always the master of brevity and concise prose, he lost control of his writing. He was commissioned by Life magazine to write a 10,000-word article on bullfighting. He submitted a 40,000-word opus, and asked writer A.E. Hotchner to help him trim and organize the piece. Hotchner found Hemingway to be "unusually hesitant, disorganized and confused." His eyesight was failing him, he'd become anxious about money and was paranoid that the FBI was monitoring his movements. (J. Edgar Hoover had in fact opened a file on him during WWII.) He drank more heavily to combat the pain from his lifelong injuries.

In 1960, hearing that Fidel Castro wanted to nationalize property owned by Americans, Hemingway and his wife Mary left their beloved Finca Vigia ranch in Cuba and moved to Ketchum, Idaho. Hemingway became seriously ill and retreated into silence and despair. He checked into the Mayo Clinic in Minnesota. Doctors diagnosed him with a psychiatric illness and treated him with 15 rounds of electroshock therapy. In early 1961 he was "released in ruins."

Hemingway had always been plagued by suicidal thoughts. His father Clarence had committed suicide with a gunshot to the head in 1928. Hemingway commented at the time, "I'll probably go the same way." Like his father, Hemingway had been diagnosed with the genetic disease hemochromatosis. This caused the inability of the body to metabolize iron resulting in mental and physical deterioration. Hemingway's sister Ursula and brother Leicester also committed suicide. Years later, Hemingway's granddaughter Margaux would take her own life.

In the early morning hours of June 2, Hemingway awoke early, careful not to wake Mary. He donned a favorite dressing gown that he called his "emperor's robe" and entered the basement where he kept his guns. He removed one, a double-barrel 12-gauge Boss & Co. shotgun, inserted two shells, walked into the upstairs foyer, put the barrel into his mouth and pulled the trigger. The story reported to the press was that Hemingway "accidentally shot himself while cleaning his gun." Months later, Mary admitted the death was suicide.

Hemingway had been a swashbuckling, hard-drinking adventurer. He was a hunter, a pugilist, a war hero and a writer who defined his time and mastered his craft. In 1954, he was awarded the Nobel Prize in Literature. He opted not to travel to Stockholm. Instead he sent a speech to be read which defined the writer's existence. "Writing, at its best, is a lonely life. Organizations for writers palliate the writer's loneliness but I doubt if they improve his writing. He grows in public stature as he sheds his loneliness but often his work deteriorates. For he does his work alone and if he is a good enough writer he must face eternity, or the lack of it, each day."