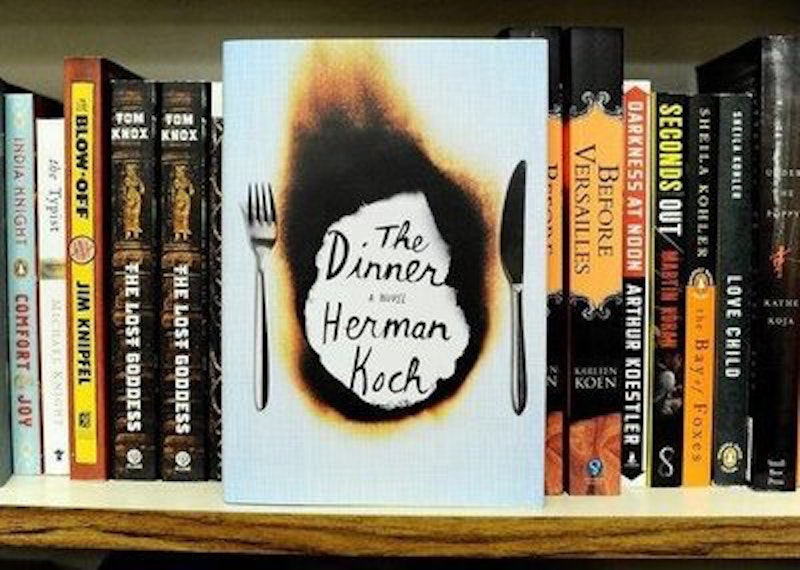 I usually hear about books in one of three ways: the book of the month list at my club, a review in the New York Times Book Review, or from Goodreads, the book/social app readers love to love.

I’d been hearing about The Dinner, released earlier this year, and when I went to drop off some books at the free exchange our club sponsors, I noticed a hardcover copy of the book and picked it up. I read books on the Kindle (app), but still prefer the printed version most of the time. A good friend of mine, Stef in California had asked for a book recommendation, so she and I read it together, which is a fun way to enjoy a book, especially a suspenseful one like this.

It’s the story of two brothers and their wives; a dinner between the couple comprises the entire timeline of the book, though some key plot flashbacks take place. The couples are there to decide how to handle a very sticky situation regarding their teenage sons. Even using the phrase “dysfunctional family” does no justice to this dark tale that grips you and doesn’t let go until the 300 pages are gone; you could finish the book in a night or weekend. I remember thinking before I read it, “How can a whole book be about a single meal?” but the author makes it happen brilliantly. You’re never bored.

The Wall Street Journal called the book “a European Gone Girl,” referencing the suspenseful thriller by Gillian Flynn, a book I completely loved. Flynn herself praised The Dinner. Good enough for me. I can see why this book was compared to Flynn’s, but the comparison isn’t fair to either book. Both are excellent reads, but they’re different in many ways. The way they’re similar, though, is understandably why they have been compared. Each is a tale of people who seem normal on the surface and then, as the tales unwind, turn out not quite to be.

“A good unreliable narrator is one of the most satisfying characters a novelist can dream up,” said Amazon reviewer Mia Lipman. “Koch's finely structured story gives away just enough on each page to keep us riveted, feeling like private investigators on the verge of discovery, until the shock of an ending. It's no small feat for the author that the less we trust Paul, the more we want to hear what he has to say.”

The book has a bit of the Dexter effect. You think you know a guy, and the narrator Paul seems like an everyman at first. So you trust him. But then, you know, things happen, and I’m not going to reveal the Hitchcock-style plot twists. You’ll simply have to read it for yourself.