We are the zombies. 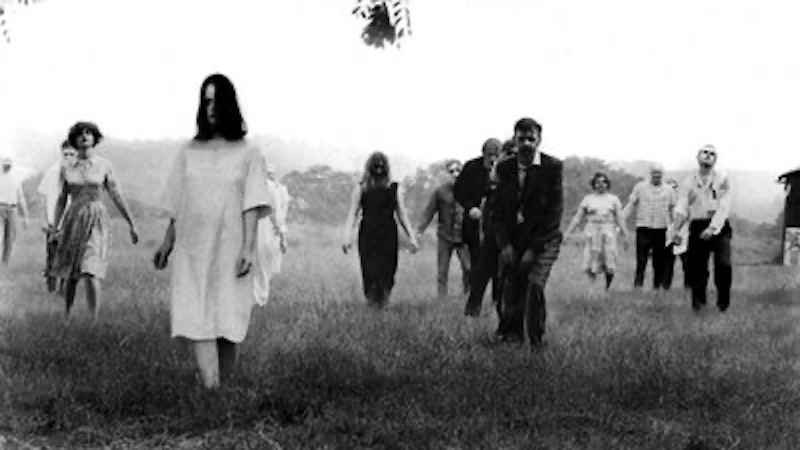 It appears that the trans-national looting spree may be coming to a close. Word from Davos is that the elites are getting worried, buying bunkers and airstrips in remote locations, hoping to avoid the inevitable consequences of the global smash-and-grab they’ve been conducting since the collapse of the Soviet Union. It reminds me of George Romero’s original masterpiece, Night Of The Living Dead. Holing up in a remote farmhouse turns out to be not such a good idea when the zombies arrive. They’re dumb and they’re slow, but they’ve got the numbers. That movie struck terror in me in 1968, when it was first released. It took the appalling bloodbath of the 21st century to disabuse me of that fear by way of the startling revelation that we are the zombies.

It seems like eons ago that Occupy Wall Street took over Zuccotti Park, a tiny patch of land in the shadow of the ghosts of the World Trade Center towers in New York City. When I visited the encampment in November, 2011, I was amazed at how tiny it was and how brilliantly organized and decentralized the participants were. There were no apparent “leaders,” no celebrity activists like Angela Davis, Abbie Hoffman, Gloria Steinem or Tom Hayden, yet there was a coherent message delivered that was breathtaking in its brevity. I quote from the Declaration of the Occupation of New York City, a document produced by the NYC General Assembly on September 29, 2011:

“We, the people, acknowledge the reality: that the future of the human race requires the cooperation of its members; that our system must protect our rights, and upon corruption of that system, it is up to individuals to protect their own rights, and those of their neighbors; that a democratic government derives its just power from the people, not from corporations, which exploit the people and the Earth; and that no true democracy is attainable when the process is determined by economic power. We come to you at a time when banks, corporations and governments have become a plutocracy, which places profit over people, self-interest over justice, and oppression over equality. We have peaceably assembled here, as is our right, to let these facts be known.

“They have taken our houses through an illegal foreclosure process, despite not having the original mortgage.

“They determine economic policy, despite the catastrophic failures their policies have produced and continue to produce.

“They have taken bailouts from taxpayers with impunity, and continue to give executives exorbitant bonuses.

“They have held students hostage with tens of thousands of dollars of education debt.

“They have influenced the courts to achieve the same rights as people, with none of the culpability or responsibility.

“They control the media, and use it to misinform and manipulate the public.

“They continue to block alternate forms of energy to keep us dependent on oil.

“They perpetuate inequality and discrimination based on age, the color of one’s skin, sex, gender identity and sexual orientation.

“They have continuously sought to strip employees of the right to negotiate for better pay and safer working conditions.

“They have consistently outsourced labor and used that outsourcing as leverage to cut workers’ healthcare and pay.

“They continue to block generic forms of medicine that could save people’s lives or provide relief in order to protect investments that have already turned a substantial profit.

“They have spent millions of dollars on legal teams that look for ways to get them out of contracts in regards to health insurance.

“They have donated large sums of money to politicians and public institutions, who are responsible for regulating them.

“They have poisoned the food supply through irresponsible practices, and undermined the farming system through monopolization.

“They have purposely covered up oil spills, accidents, faulty bookkeeping, and inactive ingredients in pursuit of profit.

“They have accepted contracts to enslave and murder prisoners, often without due process.

“They have profited from the cruel treatment of countless animals, and have actively hidden these practices.

“They have deliberately declined to recall faulty products that endanger lives.

“They continue to create weapons of mass destruction.

“They have passed laws allowing the government to be controlled by banks (including the Fed) and corporate interests, which wrests control from the people.

“They continually appoint bankers to the top economic posts, ensuring that the government’s economic policy reflects the interests of the plutocracy and not those of the people.

“They have instituted unconstitutional measures that strip us of our rights, giving a vast public and private security apparatus unprecedented access to our private lives.

“They have squandered our public treasure, over half of federal discretionary spending, into the military and security state, while waging illegal and immoral wars opposed by the people of the United States and the world.

“They have wasted trillions of dollars on these wars, much of it spent on contracts outsourced to private mercenary corporations directly affiliated with members of government.

“They have perpetuated colonialism abroad, maintaining a military presence in dozens of countries, and hijacking the economies of dozens more.

“They have colluded with governments and companies in torture and murder in direct contradiction with the Geneva Convention.

“We have been complicit with our consumption, our money, and our silence, until now.”

Well, the Greeks sure as hell aren’t complicit anymore. Neither is Iceland. Neither is Hungary. Spain is ready to blow. Europe is falling apart. Not content with having made the most obvious of military blunders in invading Afghanistan, NATO is encircling Russia with troops in what is unquestionably the most pointless and self-defeating military gesture of all time. I guess the ruling elite are too busy molesting children and snorting cocaine to read history, but one would think they’d have assistants or advisors who might keep up with things like the blatant historical lessons to be learned regarding moronic coke-addled ideas like invading Afghanistan or attacking Russia.

There seems to be an inverse relationship between wealth and intelligence. I’m guessing it’s related to necessity. Being poor requires a lot of improvisational skills and strategic thinking. The rich pay other people to solve problems for them. It’s like using a calculator to do basic arithmetic: eventually, you lose the capacity to do it in your own head. The cardinal rule of dope dealing, as illustrated memorably and beautifully in Brian De Palma’s cinematic epic Scarface, is “Don’t get high on your own supply.” The corporatists missed that lesson. The anencephalic oligarchs currently running this madhouse of a planet believe their own hype. They really think they’re rich because they’re smart. They have no appreciation of the importance of luck, not to mention a fortuitous birth.

Towards the end of the George W. Bush regime, the Bush Crime Family reportedly acquired 100,000 acres of land in Paraguay. It figures they’d follow the old Nazi rat line. Original thinking has never been their long suit, but I will grant that they are consistently ahead of the curve in their appalling peer group. The brutal honest truth is that there is no escape: not for me, not for you, not for them. It gets back to that isolated farmhouse in Night Of The Living Dead. It’s all fortified bunkers and Blackwater security teams until it isn’t: then it’s peasants in rags and sandals toting AK-47s and zombies punching their way through the 2x4 planks nailed to the windows and doors; it’s Jenna Bush staked out naked on an anthill being sprayed with soda pop and burned with cigarettes dipped in aqua regia while the peasant revolutionaries share a joint over her writhing screaming soon-to-be corpse; it’s Dick Cheney getting ass-raped into a heart attack by Mandingo and company.

As we used to say in Camden, NJ: it’s not quite hell, but you can see it from here. The future is going to kick ass. Pass the popcorn.