Genesis P-Orridge Finally Gets Some Discipline

Show me a cult icon without a dark past and I’ll show you a calculation of lies. 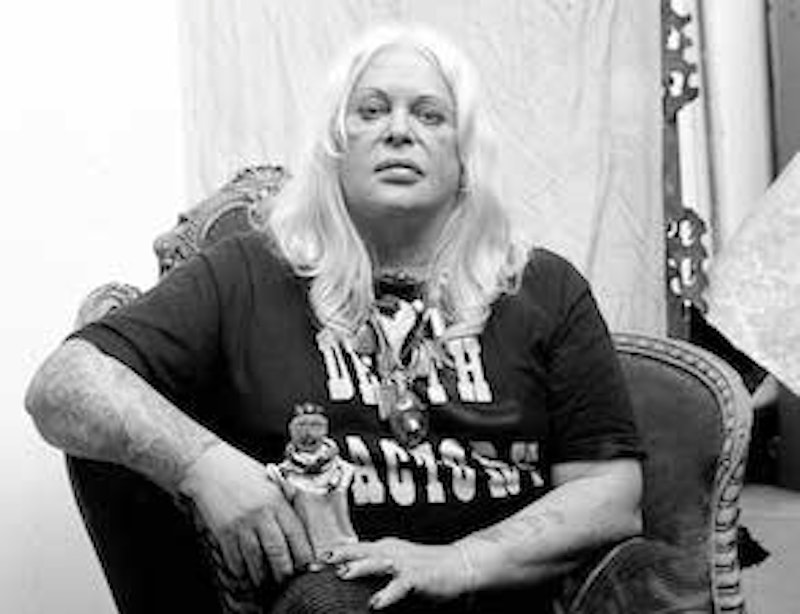 If you’re familiar with the avant-garde music scene, chances are you’re aware of Genesis P-Orridge. Forming/fronting the cult bands Throbbing Gristle and Psychic TV, Genesis has been heralded as a pioneer of transgressive counter-culture going back to the mid-1970s. Having worked to create Industrial Records alongside the less popular (and far more underground) Monte Cazazza, Genesis is considered to be the god of all things darkly esoteric and provocative. Yet now Genesis is dying of cancer, and ex-bandmate Cosey Fanni Tutti has shared her harrowing account of the abuse she endured while working with Genesis. Status? It’s complicated.

My first encounter with Genesis wasn’t pleasant. I was backstage after being assigned to interview Psychic TV for a magazine in Brooklyn. Genesis was there with the now-deceased Lady Jaye, and both of them were staring into a lava lamp that was set up at hipster bar Galapagos in Williamsburg. I think the lava lamp was on the tech rider, though it’s hard to remember. I attempted to introduce myself to conduct the interview, and admittedly promote my own silly noise project on the side.

Genesis stared at me like how dare I talk to them when I hadn’t even met so-and-so and talked to whomever. I was a bit hurt, yet was told not to take it personally. “That’s just Genesis, you know?” It turned out that P-Orridge was god of the underground, and nobody was cool enough to talk to them. After years of dealing with the same trolls and groupies myself this is fully understandable, but back then I was simply hurt. Looking back at the history of Throbbing Gristle and Psychic TV, it all became clearer to me.

Throbbing Gristle flirted with fascist imagery, and had songs with titles like “Zyklon B Zombie” and “Subhuman.” While obviously not a fascist band, there’s no doubt that Throbbing Gristle would be slapped with the “alt-right” label today. Psychic TV was a counter-response to the aggression of the more extreme Throbbing Gristle. It was dadaist disco music, appealing to cult members not serious enough to get into the OTO. Charles Manson for the weekend crowd, yet still a good time.

I preferred Throbbing Gristle. Their live performance of the song “Discipline” is an exercise in what I’d call insurrectionary performance art. It’s an incredible video, and everybody should watch it to see how powerful the underground scene can be. I’d have given my soul just to travel back in time and be at that show. I was obsessed with “Discipline.” Yet regardless of (or because of) my scenester fandom, the drama persisted.

My second encounter with Genesis was not much different from the first, but more vivid. I was at the Industrial Culture Film Festival in San Francisco alongside V. Vale of RE/Search Publications and Monte Cazazza. There was an audience panel, and I was still angry about being snubbed in Brooklyn. I raised my hand like any good provocateur-of-provocateurs would. Now was my chance to get my message out there.

Years later I’m a bit more mature, but still getting into trouble at Silicon Valley dinner parties. Genesis is being brought through the ringer; dying of cancer in an age where our greatest heroes and iconoclasts are being replaced by NPC’s. Whoops—I meant to say fine upper-middle class centrists who believe the radical fringes are harmful to their families. Ahem. Have you not read Persecution and the Art of Writing? Wink. Genesis, the last of the ironic satirists able to flirt with fascist imagery without receiving pushback from the algorithm crowd, is dying. What shall we do? They are weeding people like us out, sadface.

I’ve little doubt that the abuse allegations against P-Orridge are true, having dealt with their wrath myself. Yet the question is this: why did it take Genesis nearing death to be called out for the abuse? Why do corpses get kicked before they are even dead? Why did Cosey Fanni Tutti wait so long to come forward? Am I hurting women in the underground by asking this question? I was on a woman-in-underground noise compilation with Cosey myself, and don’t want to betray our prototype by inquiring. Cult icons are human too, and for that they are more vulnerable. I hope aggression is not what enables them to create the works of art they do, yet I sometimes wonder. Show me a cult icon without a dark past and I’ll show you a calculation of lies.

P-Orridge is now living in the brutalist fantasyland they fucked around with in the occult, and it’s hard not to sympathize as a groupie-turned-producer who went through a similar artistic experience. Something about this whole circus feels wrong, and I hope I’m not discounting Cosey by saying this. The issue is how we wait until someone is weak in order to challenge their power. Maybe that’s just rational, but perhaps it shouldn’t be. I guess there’s a lot of discipline here, and the (sub)humans are finally being stomped out of the civilized world in the name of civility. There’s a lesson here, and I’m not sure if it’s the right one.

Shitty human beings can start incredible projects and break down the barriers of banal consumerism, but why does it take them nearing death to be discussed as human in the first place? Why did everyone wait until now? Are we all just a bunch of miserable freaks who deserve each other in this black iron prison of cult iconography? I remain conflicted.