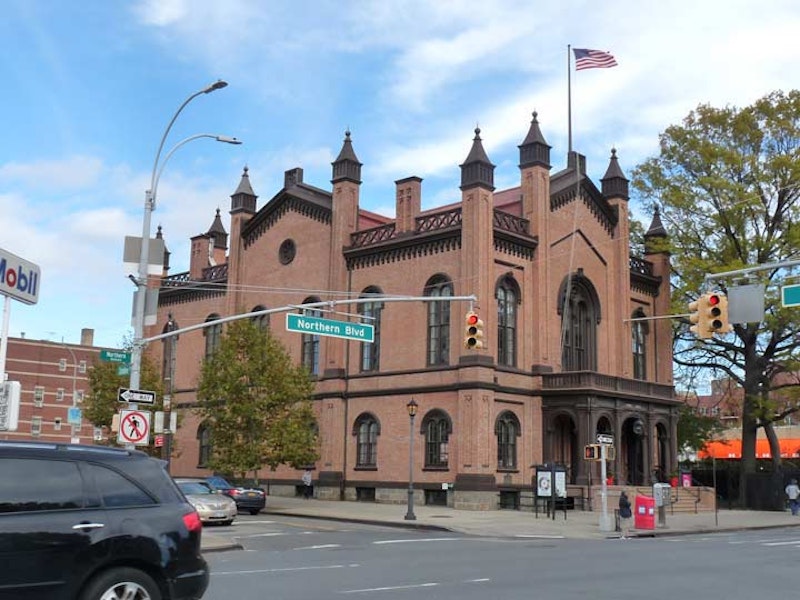 In the past 25 years, Flushing, Queens, has become one of NYC’s hubs of economic development, spurred by immigration from Southeast Asia. Once a sleepy village of Victorian-era homes with a modest downtown anchored by the RKO Keith’s movie palace and St. George Episcopal Church in the early-20th Century has become one of New York’s busiest crossroads. While Keith’s, at Northern Blvd. and Main St., closed in 1985, Flushing’s been renewed into a retail and residential powerhouse as Caldor and then Macy’s took up residence along Roosevelt Ave. In the first decade of the 2000s Asian food malls arrived, as well as high-rise apartment buildings.

Yet Flushing has a nearly 400-year-old legacy. It was founded in the 1600s, adjoining the Flushing River, which fed into the East River, giving purchase to Manhattan to the west and the Long Island Sound, and the northeast coast beyond. Lumbering and industry arrived; traces can still be seen along College Point Blvd., where there are numerous cement plants and the clock tower of the Sloane Furniture Company, which was later home to Serval Zippers, whose flashing sign could be seen from old Shea Stadium. The tower is still there, with the building now home to a U-Haul distributorship.

Flushing was a small town that became part of a large city with the formation of Greater New York in 1898, retaining its sleepy aspect until the IRT Flushing Line was pushed through to Main and Amity (now Roosevelt Ave.) in 1928. Almost immediately, Flushing took on the mantle of an urban neighborhood as its small-town trappings were gradually stripped away, cottages replaced by beetling high-rises. However, traces of its colonial past remain in place, assisted by NYC’s Landmarks Preservation Commission.

Seen above, Flushing Town Hall, constructed in 1862, is a reminder of the days before Flushing became a part of Queens and then a part of New York City. After NYC consolidation in 1898, Flushing Town Hall became a municipal courthouse, but it suffered from a gradual deterioration over the decades; there were fitful attempts to turn it into an anthropological museum in the 1970s. When I first moved to Flushing in 1993 it was a rundown heap protected by chicken wire from ever-present vandals.

The story has a happy ending. Town Hall was restored in 1995 by the architects Platt Byard Dovell and it’s currently the seat of the Flushing Council on Culture and the Arts. The magnificent building is now a bustling locale for local arts programs and jazz concerts. 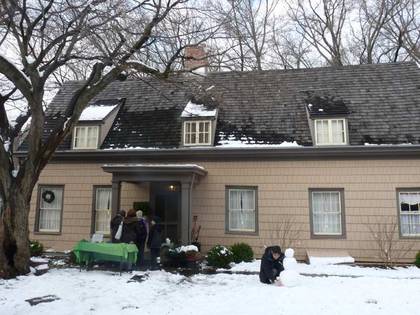 Seen above is Flushing’s oldest building. English settler and Quaker John Bowne built this house in Flushing Village in 1661, on what would become Bowne St. at 37th Ave. His house was the primary site for Quaker services. Sentenced to pay a hefty fine by the Director General, who only tolerated the Dutch reformed Church in New Netherland, Bowne refused and was jailed. Stuyvesant subsequently exiled him to Holland.

While he was there, Stuyvesant’s bosses at the Dutch West India Company reversed Stuyvesant’s non-tolerant policy, claiming that the colony needed many immigrants to ensure economic expansion, no matter what faith they were.

The Bowne House today has added a couple of ells since 1661, but it looks much he same as it always has in photographs and postcards. The public can visit it on Wednesdays, from one to four p.m., or by appointment. It’s also open to the public in December for Flushing’s holiday house tours. 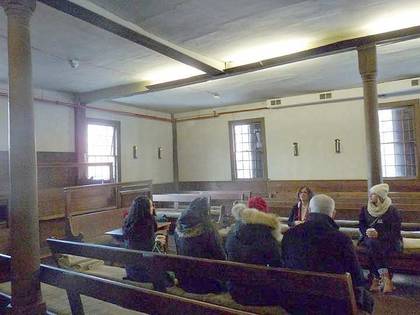 The Quaker Meetinghouse, younger than the Bowne House by 31 years, opened because of Stuyvesant’s religious intolerance. In 1657, Quakers living in Flushing sent a letter to Stuyvesant in that year that’s known as the Flushing Remonstrance, that reiterated the settlers’ desire for religious freedom. The document was signed by Flushing’s town clerk and sheriff, who were not Quakers but Dutch Reformed Church members; nevertheless, they too spent time in prison.

Thirty-seven years after the Flushing Remonstrance was presented to Stuyvesant, this meetinghouse was raised in 1694. At the rear you’ll find a quiet churchyard with graves hundreds of years old that makes a rural riposte to Northern Blvd. More old stones can be found at St. George Church at Main St. and 37th Ave.; that church, where Francis Lewis of Declaration-signing and Queens Blvd. fame was a vestryman, dates to 1854. 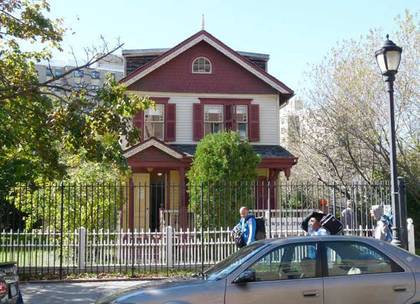 At Leavitt and 137th Sts. is the modest porch house that once was home to Lewis Latimer (1848-1928), inventor and engineer. Latimer was born in Massachusetts to parents formerly held as slaves in Virginia. He enlisted in the U.S. Navy in 1864 and upon his release answered an ad for an office assistant from the patent law firm of Crosby and Gould, ascended to head draftsman, and discovered he had a knack for invention.

In 1995, the house was moved from its original location on Holly Ave. It underwent a renovation that brought it closer to its appearance when Latimer and his family resided there, and has been opened as a museum. The building’s currently wrapping up a second exterior renovation. 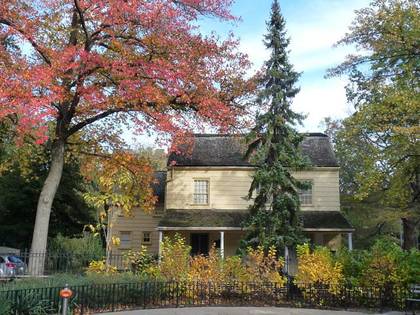 Amazingly, though Flushing can claim two buildings from the 17th century (Manhattan has none), 18th century buildings are few and far between. The Kingsland Homestead, 37th Ave. at Bowne Park, has been located in three sites since its construction in about 1790. In the 1920s it was moved to make way for the Flushing subway; before 1968 it was located at the southeast corner of Roosevelt Ave. and 155th St., where it was beginning to run down. The Queens Historical Society had it moved to its present location in Bowne Park, and the Society is housed in the homestead now.

Quaker Joseph Doughty constructed this building around 1785-1790. It’s named for his son-in-law, sea captain Joseph King, who bought it in 1802. It was later occupied by the Murray family, who gave their name to Murray Hill and Murray St. in east Flushing, well into the 20th century. The interior of the homestead has been preserved much as it was in the 19th century, and a public exhibit by the Queens Historical Society occupies a lot of the first floor, which includes a representation of the Flushing Remonstrance. 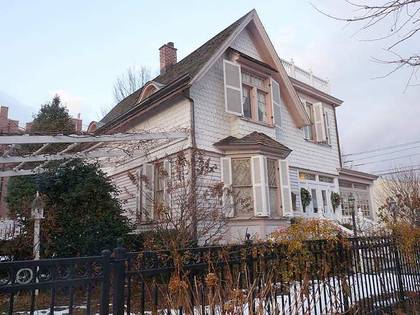 Chalk one up for the good guys!

A Victorian-era residence, the kind that have long been displaced in Flushing by monolithic apartments and bland brick two-family homes has been preserved as a museum. One of the rare survivors, a small, two-story house painted pink and white, at 149-19 38th Ave., just south of Northern Blvd., has been restored to full Victorian-era glory.

It begins with its resident for 69 years, Betty Voelker-Orth, who was born there in 1926 and lived there until 1995, when she died from complications from an automobile accident. In her will, Mrs. Voelker-Orth, an English literature teacher, nature lover and birdwatcher, left her house to the Queens Historical Society, the Queens Botanical Society and the Audubon Society with the proviso that it be converted into a museum, bird sanctuary and Victorian garden. Mrs. Voelker-Orth left a part of her fortune, which amounted to millions, to the prospective museum as well.

Completed in 2001, the Voelker-Orth Museum stands as both a testament to Flushing’s old Victorian history and as a small nature retreat.