Visions of life in no particular order. 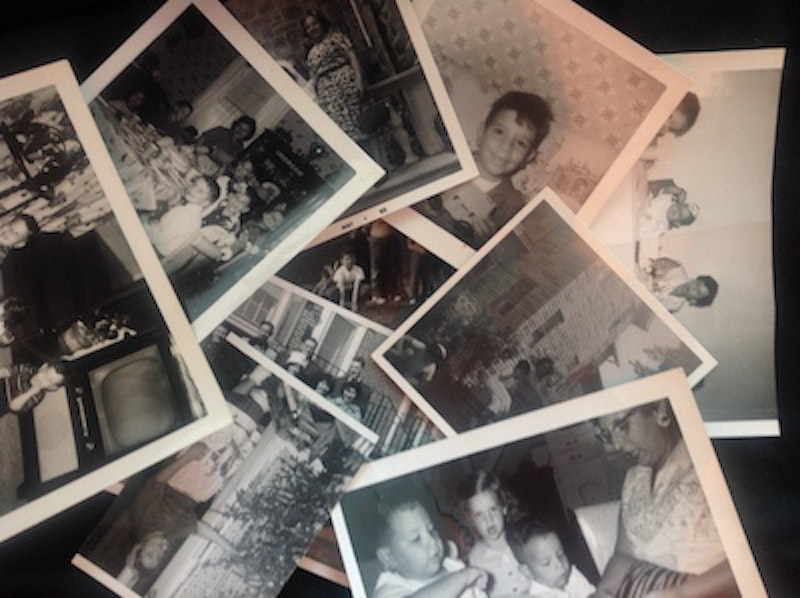 Looking at a dusty stack of old snapshots. Some are faded, while others are still crisp and clear. Many of these pictures I can’t recall. A storied life from infancy to adolescence. Attempting to piece together what was then right now. Frozen moments from when and where memories fade out like childhood. Within some shabby perspective of those freeze-framed seconds where smiles and waves happened by people posing like statues stuck in space. Me riding a black tricycle in the side alley. Laying on an unknown beach far away from this day. Things look scarier in shades of gray. Everybody becomes a photogenic ghost sharing glimpses staring back with dark blank eyes.

All these different people in forgotten places spanning the ages. Captured on shiny squares of paper stacked like a pack of playing cards. Shuffle the deck and rearrange the course of events. Personal history reinventing itself. Captured forever on a celluloid image of what’s over and done. A younger version here in this shot, another growing older there. All that you are through your own miraculous eyes. Staring at yourself growing old in fast-forward mirror lenses. Reflecting bright split seconds. The trick is not to blink when it flashes or think about it too much.

My, how you've changed! Who were you then and whom do you think you are now? All the events that occurred are stuck there like an unwound clock. Where are you heading? Trapped in some camera obscura mechanism. Trying to recall what actually happened in every scene. Unable to recall what went down in each instance. Every snap and click, flashbulb pop with a big smile or blank stare. Say cheese and don't move. Stage props set up and marked in place forever. All the negatives in reverse held up to the artificial light to see a better image outline. What’s projected and magnified into the illusion of expired events. The sepia sheets from deleted scenes in a movie never made. Looking through the transparent acetate beyond the surface. A monochrome world of celluloid blurred vision.

This one’s fuzzy and out of focus. Maybe a buried trauma of a family tragedy better left to ponder. Incidents recorded for future reference. The face in this photo has been scraped and scratched out for some reason. This other unknown figure snipped out with scissors. Here’s one of an anonymous smiling group where someone wrote 1959 on the bottom border edge. A Polaroid with the date conveniently printed on the back. A personal mythology all mixed up with strangers in a background of origins untold. A two-dimensional world. Empty space so crowded with the past glimpses of concealed storylines. Souls commingle in shadowy negative visions turned inside out.

A picture's worth 1000 words or less and each paints a different version of the same image. Repeating in doubles, even triplets of the exact picture from another angle. The perspective changing with light tricks the eye. A beefy computerized brain analyzes every visual glimpse of genuine authenticity. The real artifact is a massive rock in orbit circling a vast wasteland of red dirt and deep secrets. Paint a pretty picture; it’ll last longer. Enough to last a lifetime.

Neural pathways leading to digital footprints followed to a logical conclusion. Or merely pretend it never happened. Meta data somewhere in the ether seeing everything and nothing at all. Peering backward to the future. Just another life source trying to reformat the past through imaginary pictures that mimic life. Deleted files, erased memories, images in layers recording unreal phantoms in a mirage. Simulated realities manipulated like counterfeit currency. Pieces of paper with random pictures on them. Dreams invaded by realities algorithms. Time signature files bursting at the seams with records expired. Recent data info canceled. The operation was a success. Power on, all systems go. Slowly moving across the alien landscape. A lonely rover. Painfully cruising along in search of some semblance of what’s considered life. Invading the privacy of a distant vacuum in weightless air. Sending useless information back to zero. Vanished into a million pixels. Zoom in up close to a pinpoint of light. Watching dust particles move between sun rays. Constant flux of a solar dust storm on a dead planet. The exact time that black and white became Technicolor, analog went digital as all information became a weapon.

Through the lens of a camera, telescope, microscope, concave television eye. The all-seeing cosmic contact lens. Artificial intelligence stored in imaginary data banks. Yes dear, there’s life out there. In a distant place not so far from your own backyard. Plugged into the metal brains USB portal. Sending back visuals from another dimension. The solar panels went down. Visions of life in no particular order. On an astral plane where one day or an entire history passes by in the time it takes to think. Real as any invented reality. Random versions of life from birth to a great beyond. Further than ever before. The ancient code of the infinite. Spiraling squares, cones and circles combine in an endless parade of marching digits, dots and dashes decoding the source where all time may cease and begin to finish again. Over and out. The final transmission left no doubt. They called me Opportunity. I was here but now I must go. Signing off now…

“My batteries are low and it's getting dark.”