Does the book end up as anything more than a clever Tumblr joke? 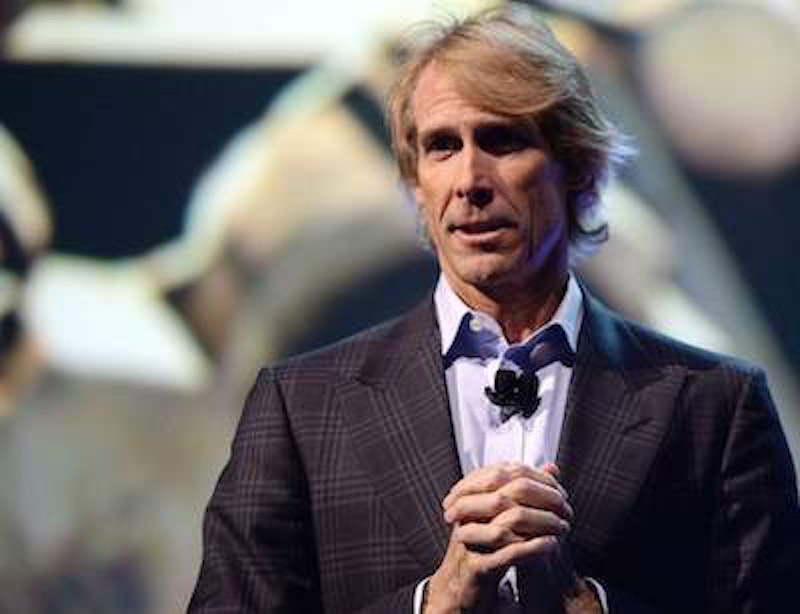 What if we’ve undervalued Michael Bay all along? What if Bay and his collaborator Jerry Bruckheimer are actually misunderstood geniuses packing their cinematic oeuvre with thoughtful if highly symbolic messages about anti-colonialism and modern philosophy? What if instead of being stupid, Bay’s work is smarter than we can easily grasp?

Mathieu Poulin’s satirical novel Des Explosions considers this possibility. Published in French in 2015, it’s now been translated by Aleshia Jensen. Explosions, as titled in English, tells the story of a version of the famous director Michael Bay who searches for love and meaning and artistic fulfillment through the medium of Hollywood action movies like Bad Boys. An intellectual with a grasp of the technicalities of philosophy, he falls for a beautiful Québécoise, but some malign force seems to be working against him. He’s under constant surveillance. Who can Michael Bay trust?

The book unfolds in non-linear sequence, entirely unlike a Bay film. It’s punctuated at regular intervals with explosions, and in that way Bay’s life is imagined as something out of one of his movies—only with subtext and symbolic heft. Explosions are linked with a formative moment in Bay’s childhood, so that his art and life become recapitulations of that primal explosion, an attempt to recapture the sense of divine meaning he felt as a young child.

It's all very droll. If occasionally labored, the novel's saved by its unconventional structure. Explosions juxtaposes scenes and moments with a daring and effectiveness that Bay (at least in the real word) can’t. The dialogue’s a touch leaden, but the prose is overall tight and clear. It’s not as dynamic as the action it strives to describe, but does move rapidly through a series of set-pieces, building character through action.

Does the book end up as anything more than a clever Tumblr joke? Your mileage of Tumblr cleverness may vary, but Poulin uses the novel structure well. There’s a complete experience to the text, a set of recurring and interlinked symbols that give the story some meaning. The themes here are so ambitious that the absurdity of the concept may be needed for it to work: this is a story about the search for divinity through art, about meaning and the changing nature of meaning. Imagining pyrotechnic explosions as a manifestation of god gets the conceptual weight across without taking that weight too seriously.

The next question is: does the book justify using and potentially exploiting real people in its fiction? In one sense, Explosions confronts the issue head-on, as the novel’s Bay defends his choice to rewrite history in Pearl Harbor: “From the moment I choose to create a work of fiction based not only on real events, but also on real people like Roosevelt, what’s permissible? What’s not? If I change what really happened for aesthetic reasons, am I a liar or a creator? Is what I’m doing defamation? Where exactly is the line?”

It’s a cute line. But if the implication is that the real Bay’s own choices justify his depiction in this fiction, one may wonder if that extends to other people. Bay’s real-life adopted parents are repeatedly mentioned and their relationship with Bay described, though they themselves are mostly offstage. The 1996 death of producer Don Simpson occurs on-camera, as it were, though re-imagined in many of its particulars. Does this come too close to a sad reality, or does it emphasize the distinction between reality and this particular fiction?

Poulin’s not afraid to court bad taste. It’s not just that he doesn’t shy away from describing a sex life for his version of Bay (though a surprisingly chaste one). It’s that the woman who Poulin presents as the love of his life turns out to be not merely from Québéc, but the town of Lac-Mégantic, site of a disastrous 2013 freight train explosion. It’s a jarring linkage of a real, fatal explosion with the glossy explosions of Bay’s work. I felt it was effective, but can imagine other readers thrown out of the story.

Then again, being thrown out of the story may be the point. A novel this consciously artificial is always challenging the reader to maintain their immersion in the narrative. It doesn’t help in this case that the mysterious conspiracy that gives Explosions its central plot is rudimentary. To my mind, it’s not rudimentary in the way that a Bay film might have a rudimentary plot, either. It’s under-imagined, in a way that’s a thematic problem.

Poulin knows Bay’s work well. I won’t claim to have caught all the references to Bay’s films, but I spotted at least a few. For the most part the parallels work without turning into a fanfiction, despite a strong hint in the text of the book that Poulin is in fact a fan. I’m not sure Poulin’s attitude to Bay matters—the text is the text, after all—but the novel does invite speculation about the his take on the actual director. In part the book’s about ways of interpreting art, how we read what’s put before us. Could we tell a sophisticated post-colonial analysis of a lowbrow cop buddy film from an actual cop buddy film? Could we tell a postmodern philosophical satire in the form of a fanfic from an actual fanfic? Or is there in fact no difference?

Explosions often has the feel of an intellectual exercise, but it’s overall a worthwhile exercise. It’s tightly written, exploring its ideas just enough without going overlong—something the real Michael Bay might learn from. What’s perhaps most subversive in the book, ultimately, is the way it develops its satire not by exaggerating the failings of its lead character, but by imagining him as so much better than the figure he’s based on. It’s a clever inversion of most satires. Bay becomes a kind of Candide wandering a hostile world, trying to articulate a meaning no one else notices. The characters might feel thin, the story might feel like a justification for a series of set-pieces, but in the end there is a kind of salvation. What’s a Michael Bay story without a happy ending?