A tourist guide on how to stay high on khat in Addis Ababa and keep it legal. 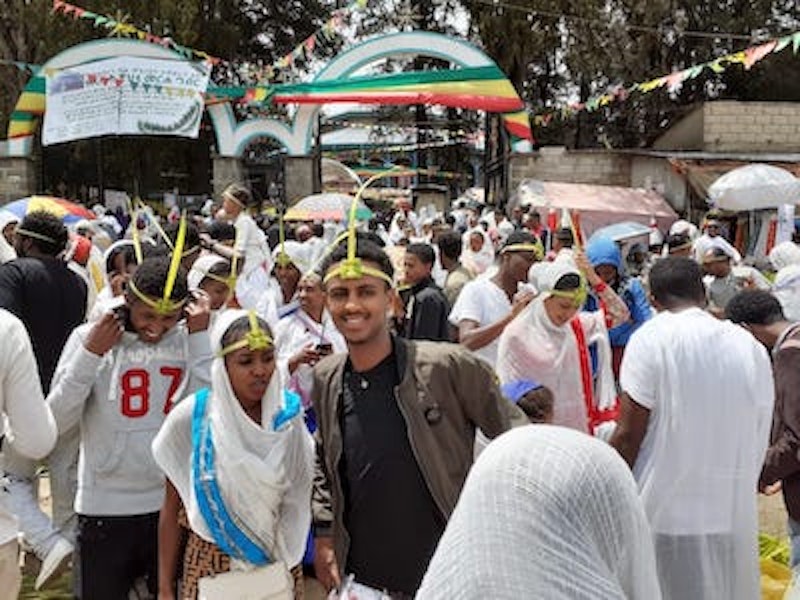 Today as I write is April 30, 2011 in Ethiopia. No, I’m not high on khat (alternatively spelled qat, and pronounced chaht in the country), though I was for four straight days during a recent visit to Addis Ababa, the capital.

Ethiopia’s a magical land, on a Top Five of the 60 or so countries I’ve visited, and it has a calendar like nowhere else. The official Ge'ez calendar has 12 months with 30 days each and a 13th month with five or six days depending on what year it is.

What that means is that whatever day it is in the rest of the world, it’s eight years and one week earlier in Ethiopia. Why? Nobody could explain it to me, as was the case with a lot of wonderfully crazy things about Ethiopia. I stopped asking about the many mysteries surrounding the country and enjoyed every minute of my time there.

Do you want to know about Ethiopian history or politics? Of course you don’t, but what I will say is that current prime minister Abiy Ahmed Ali may not be perfect but he’s way better than the appalling military-dominated regime which he succeeded and which constrains him from doing more for the people.

Unfortunately, most Ethiopians are very poor. Despite that, they’re among the most dignified, generous, happy people I’ve ever encountered. I believe that’s because Ethiopia is a great civilization and, to the best of my knowledge, the only African country that was never colonized.

The idiot Italians tried for decades but the first Italo–Ethiopian War ended in 1896 with the defeat of Italian armed forces at the Battle of Adowa. This made Emperor Menelik a hero to his people and he’s revered to this day. In 1930, "His Imperial Majesty Haile Selassie I, Conquering Lion of the Tribe of Judah, King of Kings of Ethiopia and Elect of God" was crowned.

Here’s a bit more, cribbed and lightly edited from Wikipedia about Ethiopian history and the legendary, inspiring Halie Selassie.

“The Italian army, under the direction of dictator Benito Mussolini, occupied Addis Ababa on May 5, 1936. Emperor Haile Selassie pleaded to the League of Nations for aid in resisting the Italians. Nevertheless, the country was formally annexed on May 9, 1936, and the Emperor went into exile. All League of Nations members recognized the annexation with the exception of the Soviet Union. In spring 1941 the Italians were defeated by British and Allied forces (including Ethiopian forces). On May 5, 1941, Emperor Haile Selassie re-entered Addis Ababa and returned to the throne. The Italians, after their final stand at Gondar in November 1941, conducted a guerrilla war in Ethiopia, that lasted until summer 1943. After the defeat of Italy, Ethiopia annexed the former Italian colony of Eritrea."

Let’s move on from history and politics and discuss how to spend four perfect four days in Addis, with tips on food, nightlife and cultural spots of interest.

Where to stay: The Hilton is great because it’s more expensive than local hotels but you’ll always have Internet access, which at times is difficult to get anywhere in Addis. Also, the staff is wonderful. Minor downside: I was rarely at the hotel but when I was it was filled with a lot of horrible white and Chinese tourists. Also, I never went to the swimming pool—I pretty much only slept there—but there were always a lot of assholes, some I believe consultants from the World Bank which preys on Ethiopia the way a tick sucks blood from a deer, and the music emanating from the pool area was terrible. It was, with a few exceptions, a mix of Bob Marley Light and other bland music, and it reminded me of the woman Bill Murray shacks up with in Lost In Translation who sings that godawful song “Midnight at the Oasis.”

General Information: In Ethiopia I decided to chew khat, which is legal and can be bought at street shops. I paid the equivalent of $2.70 for two big bundles. You pick the leaves off the stem, chew them up and lodge the mix in the corner of your mouth for about 10 minutes. You keep doing that for a few hours and you feel pretty fucking nice and want to talk a lot and don’t need to sleep. Some people say that it’s bad for you and addictive, but I was high off my rocker for four days and have nothing but positive feelings about khat. If anyone in the U.S. has a supplier, hook me up. One friend I met in Addis told me that he chewed every day for the past seven years except when traveling and when he does he doesn’t feel a longing for khat. Another great local item is Honey Wine, which is said to be a natural Viagra. But don’t drink it when chewing khat because it’ll cause stomach problems.

The food in Ethiopia is far better than anything you can find in the U.S., because Ethiopians can’t import all of the spices found locally and the meat and vegetables shipped here are not nearly as fresh. I’d recommend Romina, which is in an area called Arat Kilo. Try the Ingera Wat, which is Ethiopian bread but fortified with iron and darker than the usual one, and if they have it on the menu try the sheep or raw beef sliced directly from the bone of the cow that was alive not long before. There’s another branch of Romina near the back entrance of the Hilton, which is also delightful and has great local music at night, and sometimes live shows.

Weirdly, while khat is legal, shisha is not when you’re out on the street but you can find plenty of places to smoke it. These are allegedly private residences converted into shisha joints so, as far as I can tell that makes it legal. My favorite flavor is Lemon Mint, which is smooth. Apple is much stronger and harsher but also not bad. Orange Mint is in between the two in terms of harshness but very flavorful. Shisha is not habit forming to the best of my knowledge, but I smoked it every day and desperately craved it. Had it not been essentially legal and if there were local 7/11’s, I would have robbed one for money to pay for more shisha. Seriously, I don’t wake up craving shisha, which I smoke a lot in DC, and if I go a day or two without it I’m fine. And I’m healthier because when I smoke shisha about five times a week I don’t drink anything except water or tea because drinking booze while smoking makes you feel dangerously lightheaded.

What to do: Buy and chew khat for 21.5 hours until 30 minutes before bedtime. Two hours of sleep is plenty. Go to my favorite shisha bar. I can’t provide photos or its location because even though it’s sort of legal, people don’t want their pictures taken and owners don’t want their locations disclosed because it’s sort of illegal too. It’s another mystery that no one could explain to me.

At night, go to Born Again Bar. You can drink booze—I’d recommend the local St. George beer—and listen to Ethiopian music and reggae. There are a lot of massage parlors in the area. It’s probably best to avoid them, especially if you’ve been drinking Honey Wine, because you’ll get more than a regular massage and the women who work there don’t really think you are handsome, charming and attractive, and because they need to make money but it’s not a nice way to make a living.

Mount Entoto is the highest peak on the Entoto Mountains, which overlooks the city of Addis Ababa, the capital of Ethiopia. It’s lovely and when you drive up you can visit Selassie Church—not named for the Emperor—and the Temple and Palace of King Menelik.

Personally, I don’t like museums because history’s a bore and never taught me anything useful, just like science and math. But if you do, I’m told the National Museum of Ethiopia is worth a visit. It contains the fossilized remains of early hominids, including "Lucy," the partial skeleton of a specimen of Australopithecus afarensis. You might check out the "Red Terror" Martyrs' Memorial Museum, a memorial to those who were killed during a Communist government during the 1970s.

“The Red Terror was a period of intense political and inter-communal violence in revolutionary Ethiopia,” says this website. “In the struggle over the direction and ownership of the revolution, opposition groups of the radical left violently opposed a military regime that itself came to embrace and promulgate Marxist-Leninist language and policies, and that relied heavily on the use of armed force to stifle dissent.” The violence resulted in more than 50,000 deaths by some estimates.

Before getting on your high horse about the superiority of “Western Civilization,” recall that Ethiopia was a pawn in the Cold War. Moscow backed Ethiopia, which had been in the American orbit until a 1974 left-wing military coup. The Jimmy Carter administration provided weapons to Somalia in a dispute over the desolate Ogaden region.Ethiopian troops decimated Somalia. All the weapons that poured in destabilized Somalia, which soon fell into a state of complete anarchy—and off the U.S. radar screen. "The thing about Somalia," an unnamed "regional analyst" told The Washington Post in 1998, "is they really don't get the fact that nobody gives a shit about them anymore."