The Balalayka’s Single Round Hole; Meditations on Organic Farming 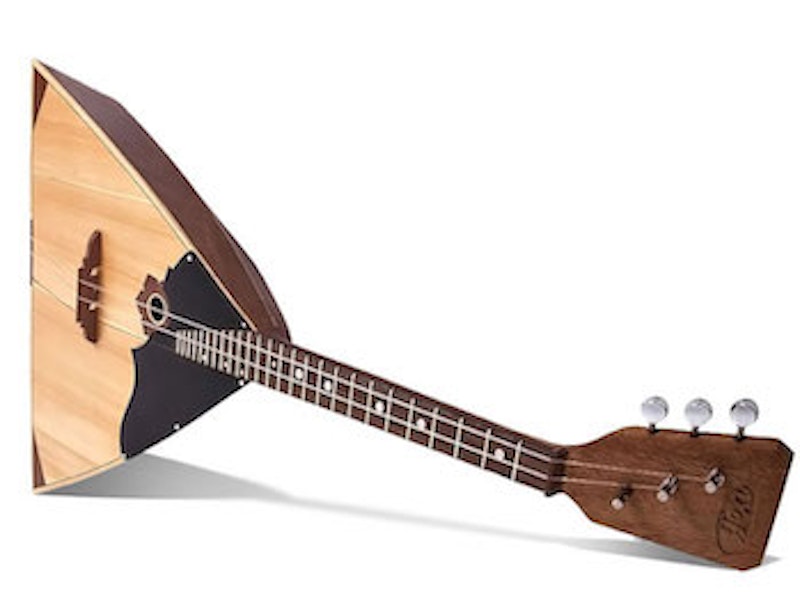 It’s an oft-noted fact that the Russian national instrument, the balalayka, bears a single round hole, rather than two f-holes like a violin, and for a wonderfully practical reason. The round hole, no more than one and a half inches in diameter, was meant to accommodate the lustfulness of the ancient Russian bard, wandering Muscovy from house to aristocratic house, sleeping en plein air between the warmth of his horse and the heat of the fire—and deprived for months at a time of female company.

To satisfy his carnal needs, the bard had only to remove the strings from the instrument, grease that round hole with the pork-tallow that he carried in a pouch under his saddle, and swiftly copulate with the instrument. It’s said that the accumulation of semen in the interior of the instrument helped to mellow its timbre and preserve the wood. This is why balalaykas constructed during the Great Bardic Period (usually dated from the fall of the Rurik Dynasty to Peter the Great’s decampment for the shipyards of Holland) remain especially prized by collectors and virtuosi today.

String instruments are much on my mind. The new spring weather stimulates my desire to sit again on my front porch by evening, gazing over our organic gardens and the raw spot in the land that marks where our new cesspool was recently sunk. And of course the strumming of string instruments—guitars, banjos, lutes, ukuleles, zithers—does much to ennoble an evening’s front-porch loafing.

So it’s time to recommit myself to the lute that I’ve neglected since last summer, and for Brother Gavin to freshly rosin his fiddle’s bow, and for Mother (when she’s done birthing the pigs) and Sister Marie to join us in harmony as we lift our voices, singing the good Old Songs. Secular songs, true. And yet we will sing them in a spirit of beatitude, dedicating them to the Lord.

This year, in addition, I plan to take up the balalayka. What better way for a Russian Orthodox convert to absorb Russia’s folk culture than to master this Russian folk instrument?

Farming gives no man a sinecure; much less small-scale organic farming as we practice it here at our Benedict Option property in Indiana; much less when the farmer is in late-middle age, and increasingly in the throes of an infirmity to which I’ve alluded over time, even if I’ve spared my readers the details.

No sinecure indeed. Consider this seed, perched between my thumb and forefinger. O how closely it guards its secrets! O what potential power it contains! The power to burgeon, under the influence of the sun and rain and inspiring breath of the Lord Himself, into a stalk of alfalfa, of oats, of amaranth, of buckwheat, of spelt. But also the power to confound the expectations of husbandry—the power to grow, if to grow at all, into a malnourished stuntedness despite the ministrations of the farmer. And yet in that way, too, no doubt, fulfilling the will of the Lord.

“Man proposes, God disposes,” goes an expression of that holy Russian peasantry whose example is so dear to us converts to the Russian Orthodox Church (Moscow Patriarchate). How true, admits the small Indiana organic farmer with a wry smile and a slight shake of the head as he inspects his property at dawn. That alchemy of rain and wind and sun and soil—would that we mere men could fully master and control it!

But to think that we ever can is folly. The infinity of God’s earth confounds our arrogant will. Indeed, there is more poetry than science in the business of growing a bushel of wheat, a peck of apples, a cord of hardwood. More poetry; and even more prayer. The wise farmer knows that the gifts of the earth are the mysterious gifts of His overwhelming love, that same love that caused Him to sacrifice for us his only-begotten Son on the cross.

Faced with the rigors of husbandry, the wise farmer shakes his head, and sighs, and smiles again that wry smile. There is nothing for it but to strap tighter one’s sandals and roll up one’s sleeves, and throw oneself—with, on one’s lips, the prayer for plowmen of the Holy Great Martyr Tryphon—into the blessed work of the day.