Los Angeles is full of surprises. 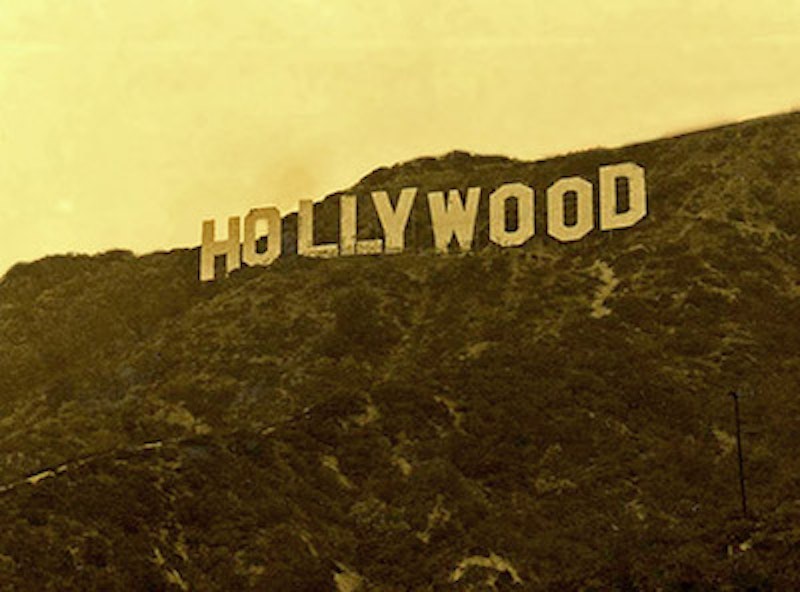 Everything in Los Angeles “is” kinda famous. The sprawling city looks just like it does in the movies—lots of swimming pools and palm trees. At times the palms look fake, hundreds of silhouettes standing against violet mountains. Cars twist and turn through canyons and hills. Coffee-colored rings of haze hang in the sky. A sign named Hollywood stands guards over a massive, desert basin where come people come to get rich or famous or both.

Flying in from the east, descending above the San Fernando Valley palm tops, long shadows are cast from 1940s-style suburban homes. After the war, citrus ripened in the surrounding groves and young Valley girls, future moms-to-be, candled farm eggs for a living. Looking west at the curve of the forever horizon, the sun slowly sinks into the Pacific Ocean—it’s an extraordinary view, a welcoming blanket of shimmering light.

LA’s an indelible, sexy creation. On my first visit she greeted me with open arms. An ethereal presence took me by the hand, ready to share an inner, love mantra that absorbs into your skin, almost as if to say, “You’re one of us now.” LA is a place that shakes, burns and bites like a Black Widow. So naturally I thought, “This is where I want to live.”

LA’s eternal gift to the world is the movies. In the early part of the 20th century when sound was added to silent films, the “talkies” needed dialogue and scripts. Writers found this attractive and flocked to the city. Lawrence Culver’s book The Frontier of Leisure describes, “Popular histories of the City of Angels have generally espoused two opposing plots—one a romance, the other a tragedy.” Writers also exposed the town’s hidden underbelly, full of salacious secrets. Consider all the crime novels and films set in LA.

Why such interest? Because LA’s the devil’s playground that harbors the urge to kill. Most of us love watching Hollywood’s horror movies with shameless fascination. But the stories of Richard Ramirez, OJ Simpson and Charles Manson aren’t fiction.

When we enter the criminal world of the desperate and deranged, and they’re left to their own devices, weird things sometimes “just happen.” It’s little wonder LA is a fear and terror magnet. In earthquake aftershock darkness, one might be hunted, captured and butchered, left as a lifeless victim in a rippling pool of blood. Maybe it has something to do with easy access to machetes and tire irons.

It came as a surprise my friend Don unknowingly lived in the house next door to the infamous 8763 Wonderland Ave. murders in Laurel Canyon. On an uncomfortable visit once, I cautiously asked him, “Do you know...” He told me he heard the folks who used to live there, “... just fought a lot.” Now that’s another story. And there’s already a movie.

East of LA in the Mojave Desert is one of my favorite places. Looking at the Milky Way in the night sky, the desert’s an easy place to ponder existence. All second guesses can easily be put aside.

However, once you think you’ve cracked the LA code, it changes. Any attempt to bottle the genie, mold the chaos or play peekaboo results in retreat. The chameleon city changes—unable to conform to norms, it morphs and becomes unrecognizable—disguised in a thick pasty, coat of Max Factor make-up.

Orange is the color of the Southland and orange is everywhere. Big plastic bags of oranges are sold on corners. Orange letters on black signs. When you ordered the knockout, breakfast burrito at the now closed, rock ‘n’ roll Duke’s Coffee Shop in West Hollywood; it’s carefully designed. A twisted S-shaped piece of orange is placed on your plate. A single, standing sprig of parsley looks like a palm tree. Having an orange juice? It’s fresh-squeezed and tastes, just like oranges.

The lonely Hollywood sign stands as a symbol of an ever-present netherworld. My main problem was I endured the drawbacks of not being a driver stuck in the middle of car country. One day my friend Pete Haskell picked me up in his big green, beat-up Oldsmobile Delta.

We ventured up to Beachwood Drive in the Hollywood Hills. Looking up from the street below, there it was. And it’s nothing special, just a shabby, white sign surrounded by dry brush (see photo above).

Consider Peg Entwistle who at age 24 in the 1930s met her sad fate here. After hiking a winding dirt path, the starlet climbed up and jumped off the letter H. The next day, a letter arrived in the mail offering her a lead in play about a woman who dies by suicide. One of LA’s many stories—a city full of success stories and many forgotten failures.

During the 1960s, Hollywood discovered a goldmine. The arrival of the “flower power” generation was an easy target, ripe for exploitation. Their formula was simple: just exaggerate the sex, drugs and violence. For the most part, grindhouse movies provided audiences with enjoyable, sleazy entertainment. Even mainstream movie attempts came off super-stoned, like Otto Preminger’s 1968 comedy Skidoo.

Meanwhile, conservative Hollywood was fraying along the edges. Among the new storytellers passionate about unfolding their alternative dreams: screenwriter Terry Southern, photographer and actor Dennis Hopper and director Bob Rafelson. They raised their middle fingers.

Discontent was happening in fine art too. The burgeoning LA art scene bypassed the New York elite with its off-the-wall style sensibility. Much of the action focused around the Ferus Gallery. Warhol’s Campbell’s Soup Cans was shown there in 1962. Ferus was located near the bohemian hangout Barney’s Beanery on Santa Monica Blvd.

One of Ferus Gallery’s artist founders, Edward Kienholz made an assemblage of mixed media in 1965. The Beanery tableaux was a satirical look inside the bar with clock-headed patrons. Ed Ruscha, the godfather of modern-day artists books, view of Sunset Boulevard was an innovative 25 foot-long accordion fold book, Every Building on the Sunset Strip in 1966.

In 1969, the low-hung bougainvillea streets of West Hollywood sat baking in the sun. Driving past Paramount Pictures Studio lot on Melrose Ave. you could smell the vinegary odor of film processing.

On my hideaway Palm Ave. block back then, three longhaired guys sat on a ratty couch outside a deteriorating bungalow. Henry Diltz’s photograph became Crosby, Stills and Nash’s first record cover. The house has since been demolished. Birds of Paradise grow in front of a parking lot. LA has an odd sense of preservationist history.

Looking back to my 1980s in LA with disconnect, it’s hard to believe one morning I stood behind Smokey Robinson making an ATM withdrawal at a Bank of America on Santa Monica Blvd. In fact, his eyes really are a gorgeous shade of translucent green. I nodded politely and chimed, “Hi Smokey” he smiled graciously and nodded back. Then I thought, everything here in Los Angeles “is” kinda famous.