The Transoms of Red Hook

Another renaissance in Brooklyn. 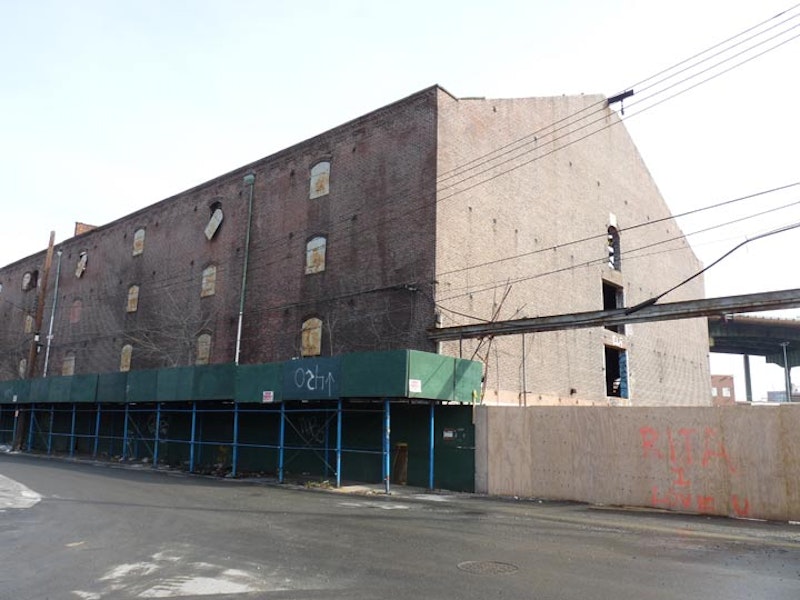 Red Hook, that Brooklyn enclave west of Hamilton Ave. below the Erie Basin and Buttermilk Channel, like Cobble Hill, Fort Greene, Williamsburg, and Greenpoint, has undergone a renaissance in recent years, as damaged and decrepit housing has been rehabilitated and new construction is in the planning stages or underway. An IKEA home furnishings superstore and a Fairway supermarket have taken root in this formerly down-at heels neighborhood, where the Red Hook Houses, built in the 1930s, and the Brooklyn-Queens Expressway, built in the 1950s, seemed to cut Red Hook off from the rest of Brooklyn. Red Hook presents many different faces: old industrial and formerly ship-yarded waterfront, side streets with modest brick and frame homes formerly housing dock workers, empty lots and barking dogs, and soccer fields near the projects.

“It’s hot in the cold places tonight” sings Jeff Tweedy on Wilco’s 2002 LP Yankee Hotel Foxtrot. As Red Hook becomes popular, can it survive the influx of visitors its new waterfront attractions will bring in? Or will it be inundated with tract housing, as so many other rehabilitated neighborhoods in NYC have? Will its real estate prices rise so high that its traditional residents will be priced out? So far, old Red Hook has held its own.

Above is the ancient S. W. Bowne storage warehouse at Smith and Bay Sts. It was constructed as a storehouse in 1886, but was abandoned for several years. The Chetrit Group purchased the property in 2007 and in 2018 announced plans to demolish it. A fire that’s considered suspicious in June 2018 damaged part of the roof. Community groups still hope to get the building landmarked, and propose that it’s rebuilt and used for a community center, a market, or co-working hub like WeWork. 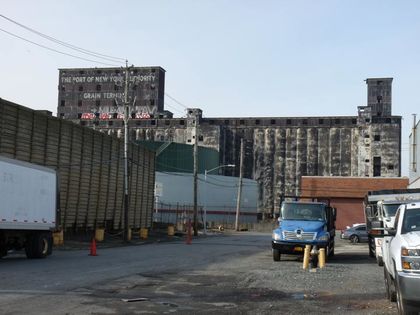 This massive concrete silo, seen here from Bryant and Clinton Sts., built in 1922, was once the processing center for grains used for breweries and distilleries shipped down from upstate and the western USA via the Erie Canal. The terminal closed as shipping in Red Hook gave way to New Jersey containerization beginning in the 1950s. With its 54 joined concrete silos, it’s described as looking like “concrete ladyfingers.” Today, the soccer field in front of the terminal has it as an impressive backdrop; dance companies have used it as a staging area, and urban sports enthusiasts have rappelled on it. 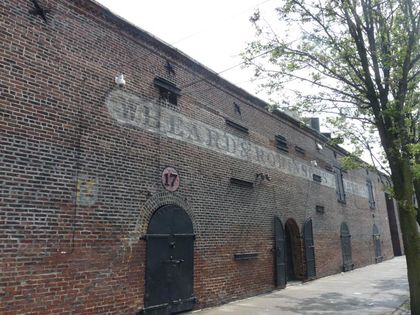 The Brooklyn waterfront from Greenpoint to Red Hook was once a bustling shipping area with warehouses employing thousands of men unloading spices, cocoa, flax, hemp, jute, medicinal bark, leather, dried fruit, tobacco, wool and other products, some exotic, some everyday, from the world over. Only a few of the old warehouses remain: the Arbuckle brothers’ Empire Stores in DUMBO and the ones here at the end of Van Brunt St.

The brick structures known collectively as the Beard Street warehouse were built by William Beard and Jeremiah and George Robinson in 1869, and are among the very few warehouse/piers remaining in New York City. Beard transformed what had been submerged marshland into Erie Basin, a huge seaport and storage depot.

The 7.5-acre Beard Street Warehouse complex consists of 21 attached structures built from Manhattan schist salvaged from railroad projects and the Montague Street grading and paving, as well as ballast stones from European vessels. One story has it that the enterprising Beard would charge the ships 50 cents a cubic yard to empty their holds into the nearby basin before taking on cargo for a return trip; the stones served as a foundation for the warehouses.

The warehouse contained dozens of individual “stores” that now have a variety of uses: ad agencies, costume designers, medical supplies distributors, and formerly, the Brooklyn Historic Trolley Association. Its public harbor esplanade has been shored up and once again provides magnificent views of the harbor. Check its indoor walkway for tantalizing glimpses of the beehive-like activity within. 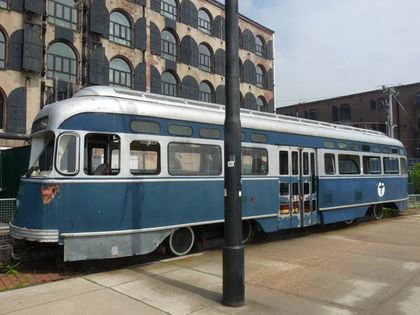 Are trolleys truly extinct? According to the City of New York, they are. But for a brief shining moment in Brooklyn, they weren't.

There was a Jurassic Park-like experiment in remote Red Hook, Brooklyn, where a Flatbush resident named Bob Diamond dreamt of returning trolley cars to their rightful place on the streets, where they ran for the greater part of the 20th Century. In the movie Jurassic Park, David Attenborough cloned some dino DNA found in an amber-preserved insect, and bingo, a flock of man-eating lizards appeared. Diamond acquired some trolley DNA in the form an 1897 model from F. Schuckert & Co., built in Nürnberg, Germany, and used in the Oslo, Norway trolley system for many years (and even served as the king's private car for a time), three 1951 PCC cars that ran on Boston's Green Line for decades, a switching locomotive, and 12 trolley cars from Ohio. He intended they rid the waterfront streets of auto traffic the way the velociraptors got rid of hapless villains and extras in the movie.

In 2003, the City pulled the plug on Diamond's dream. The Department of Transportation insisted that Bob acquire independent funding for the project; but he was unable to raise enough money to continue.

After discovering an abandoned LIRR tunnel under Atlantic Ave. in the early-1980s, Diamond set in motion a process that he hoped would someday bring trolley service from Red Hook to Brooklyn Heights. He acquired space in the Beard Street Warehouse where he formed the Brooklyn Historic Trolley Association and worked on revitalizing the ancient cars; he’d hoped to open the space for a trolley museum, construct trackage from Red Hook along Columbia and Furman Sts. to the new waterfront park being constructed there, and perhaps even return the Atlantic Ave. tunnel to revenue service.

For a couple of years, it progressed steadily, as Diamond constructed trackage in a loop along the waterfront running west from the warehouse, and then along Conover, Reed and Van Brunt Sts. The PCC cars and the brown and gold Schuckert clanged along the waterfront as tourists marveled.

Diamond had disputes with former volunteers on his team, was evicted from the warehouse after occupying the space rent-free for almost 10 years, and the city grew tired of waiting for Bob to raise funds. The City dropped support for the project, and finally, the Department of Transportation came in and ripped up the tracks and paved the streets in early 2004. But the tracks along the waterfront, catenary wire and poles, and a remaining Boston trolley car are still there at the waterfront. Perhaps Diamond can think of a way to get the project clanging again; we can wait and hope. 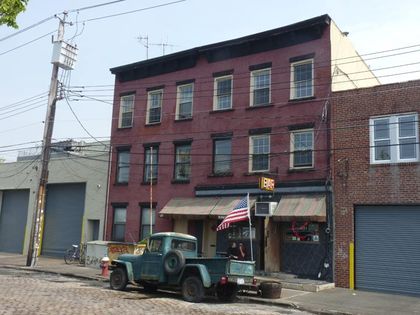 The Balzano family’s bar on Conover between Beard and Reed Sts. has been a Red Hook waterfront institution for three generations. For most of them Sunny Balzano was a constant presence. His family has owned the business for decades, with his uncle John keeping the bar open every day until six p.m., serving sandwiches and Italian food to longshoremen and dockworkers. Gradually, the Red Hook docks became silent as the shipping industry moved across the harbor to New Jersey, depriving the old place of many of its old customers, but Sunny and John discovered that a new clientele of artists and musicians from nearby Williamsburg was coming to the bar.

After John passed away in 1994, Sunny ran it as a nonprofit club featuring musicians and local performers, opening Friday nights only, and after acquiring a new liquor license and renovating the bar, Sunny was able to open a couple other nights a week as well. The bar’s now a neighborhood gathering place for its new breed of customers.

Since Sunny’s death in 2016, his widow Tone Johansen has kept the place going. 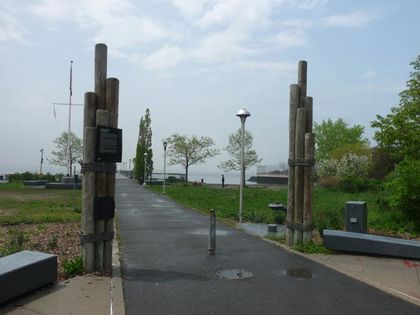 At old Pier 39 facing Upper New York Bay, Red Hook residents have enjoyed a shiny, modern pier at the foot of Coffey St. since the late-1990s. Louis Valentino Jr. Pier is named for a hero firefighter who sustained fatal injuries in a Canarsie blaze in 1996. Upper New York Bay, the Statue of Liberty, New Jersey, Governors Island and lower Manhattan are well in view. The pier overlooks the western end of the Buttermilk Channel, so named because its roiling waters apparently would churn milk, or so the legend goes.

A tiny sign… almost invisible when foliage covers it in summer… on a chain-link fence topped with barbed wire at the park’s northern boundary identifies the green area at the pier as Fort Defiance Community Park; here were fired the shots from the short-lived fort, once located a few blocks to the south at Dwight and Beard Sts., that delayed the British long enough to allow colonials to escape without being decimated.