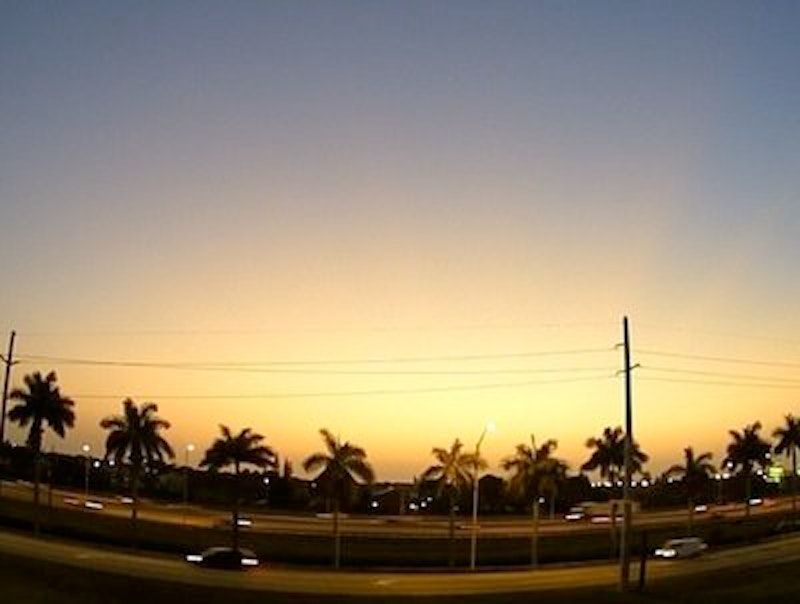 August is the best argument against Florida. I’ve been living with Daisy in Gainesville for the last year. It’s a great little town, unassuming and unpretentious, with a thriving arts scene, a very professional and deservedly respected police force, good race relations, fine restaurants, easy access to guns, zero access to health care for the uninsured, and the most brutal summers I’ve ever endured. July and August, the air turns to hot syrup around here. I’ve lived in Vegas. It gets hotter there, but it’s a dry heat. As much as I love Florida, high summer here is just plain awful. I live in the pool and the air conditioning. I’ve become nocturnal.

I was going to take Daisy to Denmark and Finland this year. She’s of Danish descent, and she’s never been out of the USA except for a trip to the Bahamas a long time ago. I’ve got a lot of friends over there that I haven’t seen in a long time. I actually have something of a following in Finland, no doubt owing to their superlative educational system and their perverse unwillingness to be drawn into bipolar geopolitical strategies.

The current invasion of Europe by Muslim hordes put the kibosh on that idea. As I explained to my friends in Copenhagen and Helsinki, if we wanted to watch Nazis beat the shit out of brown people in the street, we can do that here. We considered Iceland. There are only about 350,000 people in Iceland, and they all know each other, so there’s no room for any Mossad/CIA/MI6 false flag antics or genuine Muslim sharia shenanigans. I suspect that any foreigner caught raping an Icelandic woman would be subject to a swift and brutal amateur orchiectomy, doubtless performed with a broken beer bottle.

Maybe next year. This hideous globalist dystopia is coming apart, the obvious consequence of the same over-centralization that led to the collapse of the Soviet Union. Radical nationalism fueled by populist dissatisfaction with the trans-national neo-feudal agenda of the economic elite is sweeping Europe. Here in America, it manifests in the Trump campaign, itself the mutant offspring of the thwarted efforts of Charles Lindbergh and Huey Long to resist the swing to globalist oligarchy back in the mid-20th century. In plain words, National Socialism is coming back.

Forced integration does not work. It only breeds more hatred. True diversity can only come into being in a cultural ecosystem defined by clear boundaries and mutual respect. “Racism” is now so broadly defined that it’s lost all meaning. “Cultural appropriation” is by far the silliest concept ever to emerge from the manipulated fake Left. Any relevancy that the Soros-funded Black Lives Matter gimmick might’ve possessed got tossed into the gutter on Elvis Presley Boulevard last Monday in Memphis. The demonstration outside Graceland on the eve of the annual vigil was tasteless and profoundly stupid. Elvis Presley didn’t “culturally appropriate” anything: he paid tribute to black artists. He put them on the map. He bought his clothes at Lansky’s, where the black pimps bought theirs. He made it hip to be black. Want to talk about cultural appropriation? Let’s talk about Hamilton. Why do they want to cast Idris Elba as James Bond? Why didn’t they cast him as Tarzan and correct that insanely racist narrative?

My presumed “white privilege” doesn’t seem to apply to the $3500 of dental work I need to pay out of my own pocket, nor does it offer any access to basic preventive health care. Getting an appointment with a General Practitioner here is harder than getting into Studio 54 at its peak. I should know; I was there. I’ll bet I could get all of my medical needs taken care of if I were here illegally. There’s no lobby for native-born white Americans. That’s going to change. It has to change. We’re getting to be a minority here, and we have always been a minority globally. It’s time we started organizing like a minority.

Next year in Helsinki, for sure.