And a stop in at Trudy's. 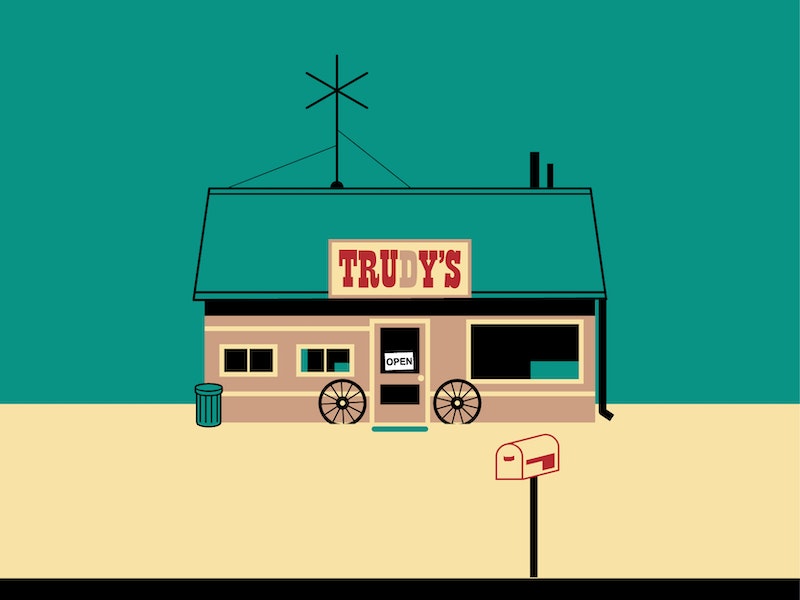 The powder-blue pickup, peppered with rust, beetled along back roads. Big Dan Kincaid's left elbow jutted out the window, his right hand draped lazily atop the steering wheel as he hummed "Oh! Susanna," an eye open for some grub. July was hot and humid in Georgia, and he was hungry.

Trudy’s, a wood-sided diner, a wagon wheel on each side of the welcome mat, sang to him. No vehicles in the sandy lot, but the sign read OPEN.

Big Dan parked, got out, wiped his face with a worn red bandana, inhaled the piney air, then stepped from the blazing sun to the dark quiet interior, the screen door snapping shut behind him. Scanning the room, he saw a scattering of mismatched tables and chairs, a Formica counter, no people. Thumbs hooked in denim pockets, he bellowed, "Hallo! Anybody home? I’m a hungry man!”

Trudy, scowling, her viewing of Queen for a Day interrupted, sauntered from the back room to witness the towering figure: head almost scraping the ceiling, broad of shoulder, slim of hip, a half-smile teasing his lips, eyes a-twinkle. He doffed his grimy plaid workman's cap and said, "Hi! I'm Big Dan Kincaid, an' there ain't nothin' th' matter with me that a nice juicy T-bone steak—about yay thick—wouldn't cure!" She loathed the way he squinted while holding up his hand, index finger and thumb an inch apart, illustrating his preferred thickness of meat. She'd been in a pissy mood before this oaf arrived, but now her blood was beginning to boil.

"Grab a seat, mister. We got hamburgs and we got franks. Take your pick." Still standing, he said, "A hamburg, I suppose.”

"Anything else?" He drank in her tousled red hair, hungered for those full rosy lips. And that figure! She's got to be 36-24-36! Like a movie star! This gal's gonna be my bride! I'll having her droppin' babies like Ethel Kennedy! Big Dan cleared his throat, winked, looking straight into her angry green eyes and said, "A pipin' hot baked potato would sure hit the spot!"

"Mister, we got potato chips."

As Trudy bent to retrieve a can from an old cooler on the dusty wood floor, Dan reached over and slapped her on the rump, like he would a hoss. Bolting to attention, she whirled around, razor keen daggers flashing, fists clenched, knuckles white. Smirking, he basked in her fury for a moment, holding that greasy cap in both hands, chest high, and said, "Lemme guess, little lady: I hitcha—an’ it felt like a kiss?" The smirk grew to an ear-to-ear grin. She noticed a gap that should've been a front tooth.

Trudy hissed, "You hit me and it felt like a pain in the ass,” as she hefted an iron skillet from under the counter, took one step closer to Dan, and swung the skillet with all her might, its trajectory a quick sweep, arcing from low to high, slamming Big Dan Kincaid in the nose, driving the cartilage up, right to the brink of his brain, almost killing him then and there. He hit the linoleum like a 200-pound sack of manure, writhing spastically, screaming in agony. Trudy spit, "Shut up, you stupid son of a bitch! SHUT UP!”

She whammed the frying pan into his face again and again, reducing the yowls to a gory gurgle. One more blow then... silence. For good measure, she gave the corpse a swift kick to the nuts. In strolled the sheriff and his deputy. "Whee dawgies! What we got here, Cousin Trudy,” asked Sheriff Carter. Deputy Fife smiled like a fool.

Pulling the wallet out of Big Dan's hip pocket she said, "Never you mind! Just get this stinkin' carcass—and that rust bucket it rolled in on—the heck on out of here. Weight him down real good, and dump him in Black Bog, and ditch the heap behind Crowley's for time being. When you're finished, you boys hustle on back for all the Old Milwaukee you can guzzle—on the house! Now git! I got a bloody floor to mop up, for Christmas sake!" The lawmen hustled out, hauling Big Dan.

With a whisk of her petite hand, she flipped the sign in the door from OPEN to CLOSED, and went back to watch the rest of Queen for a Day before getting out the mop and bucket and Lestoil.