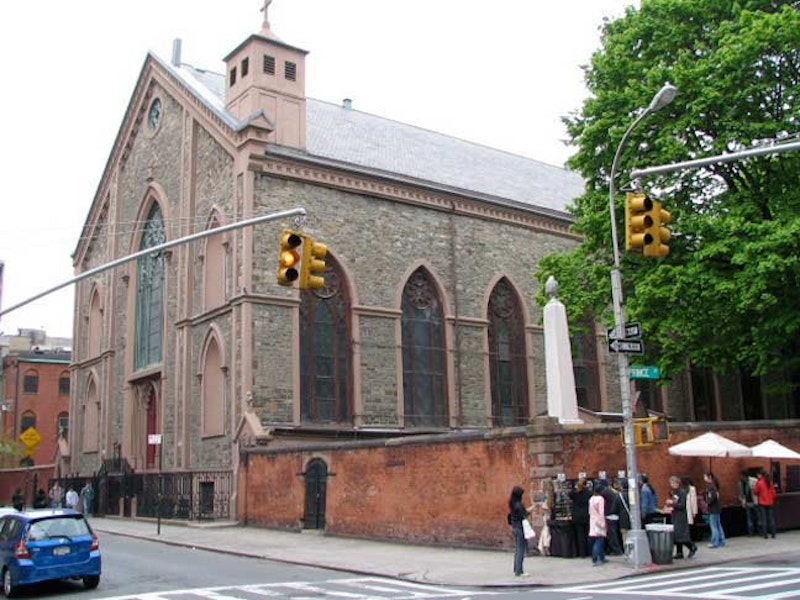 St. Patrick’s “old” Cathedral, 260-264 Mulberry Street between Price and East Houston, is called “old” to differentiate it from its “newer” cousin uptown, St. Patrick’s Cathedral at 5th Avenue and East 50th, designed by James Renwick Jr., begun in 1878 and finished in 1888. Old St. Pat’s, NYC’s original Catholic cathedral, is quite a bit older, having started construction in 1809 and completed in 1815, making it one of the oldest buildings in Chinatown/Little Italy. In March 2010 Pope Benedict XVI announced that it would become Manhattan’s first basilica, a church that has been accorded certain specific and ceremonial rites way too esoteric to list here that only the Pope can bestow; we’ll just say it’s a special church honor. For example, St. Peter’s of the Vatican, partially designed by Michelangelo, was also afforded the title. 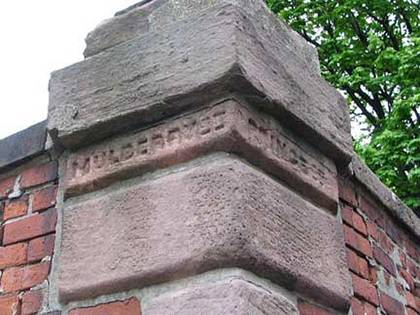 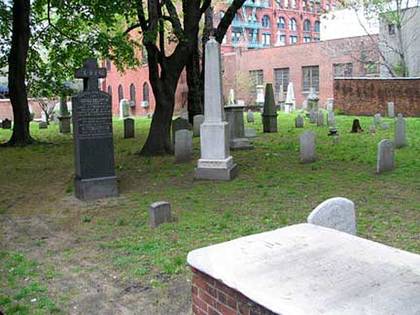 The Cathedral was built at a time when Roman Catholics were under literal attack in NYC, as depicted in Martin Scorsese’s Gangs of New York. A brick and stone fence was built to surround the chuch and its accompanying churchyard because attempts were made to burn it down during the mid-1800s. Scorsese served as an altar boy in his youth here, and the church was used for several scenes in The Godfather and Gangs. 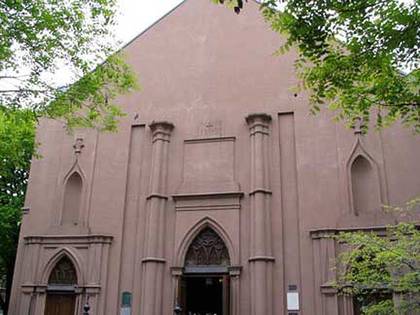 The soon to be Basilica, see here from its plainer Mott Street side, was designed by architect Joseph François Mangin. It is 120 feet in length and 80 feet at its greatest height. Its organ is nearly a century and a half old, installed in 1852. A wealth of mortuary vaults lie beneath the church, and the churchyard’s most famed interment was Venerable Pierre Toussaint (1766-1853), a Haitian immigrant and former slave who became an abolitionist, philanthropist (he made his money as a hairdresser for NYC’s upper crust) and devoted himself to the ministrations of NYC’s poverty-stricken, opening shelters for orphans, a credit bureau, employment agency and refuges for priests during the turbulent period for Catholics mid-century. He was responsible for some of the funds that went to build the uptown St. Patrick’s Cathedral, in whose vaults he was reinterred 137 years after his death by John Cardinal O’Connor. 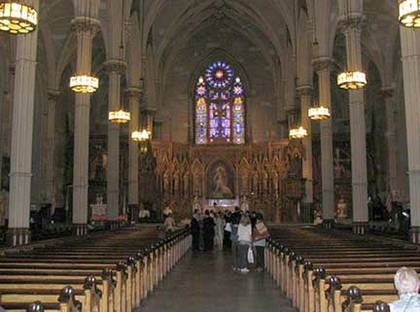 The Cathedral was one of the first buildings in NYC to gain Landmarks status in 1966. It was remodeled after a fire in 1868 with cast iron columns that support a timber roof. (Had such a remodeling been done in recent years, it might put it in trouble with Landmarks as far as designation is concerned.)

In the Civil War the Irish-American brigade, the Fighting 69th Regiment, counted many of its members worshipers at St. Patrick’s; the regiment lost many men at the Battle of Bull Run in Virginia and is remembered by a monument in Calvary Cemetery in Queens. Archbishop John McCloskey was made the first American cardinal by the decree of Pope Pius IX and he received the Cardinal’s red cap here on April 27, 1875.