The Earth Takes Its Stuff Back

It will blow your house down. 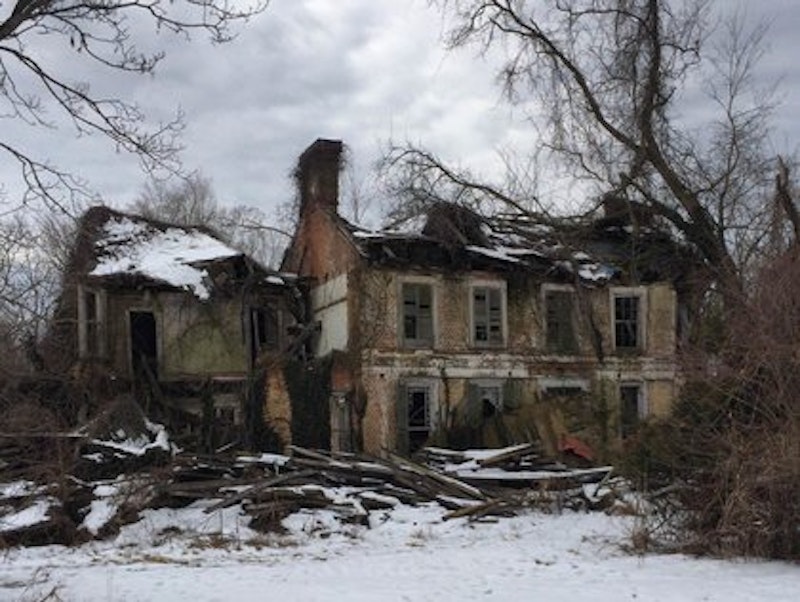 The stupid coastline is frozen, so I can’t kayak and go sea glass hunting. I have a nasty cold and hate this miserable weather. All of this means I’m grumpy. Please don’t ask me to explain why taking photos of abandoned houses in the winter cheers me up, but it does.

There’s a thrill in driving up a driveway to a place that hasn’t been visited for many years. More than a decade ago, I did contract work for the Maryland Historical Trust under the guidance of the late, brilliant Orlando Ridout V. My job was to find 500+ old buildings from a 1970s historic sites survey listing in Queen Anne’s County, Maryland, and report on whether they were still standing. I took a photo of each.

I liked this job. Sure, there was the occasional encounter with a crazy cat lady or government-fearing farmer, but 95 percent of the time, it was peaceful, quiet and adventurous. You were never really quite sure you’d make it through that huge mud puddle in the driveway, never sure there wasn’t an insane person with a gun inside that abandoned building.

So now, sometimes, and only in the winter (the places are far too overgrown to photograph in summer), if in the area, I’ll revisit the buildings and see how they’re holding up, if at all. Many have been lost to demolition, fire or really bad renovations in the last decade.

It’s interesting to watch them decay. The earth will take them back. Houses rot from the inside out. Water is the main culprit, leaking through roofs and windows, wicking up from wet cellars. The wood is the first thing to go; once-gorgeous random width pine floors collapse downward. The plaster, once hand-applied to the walls, cracks and tumbles as it falls away from the thin wooden lath boards holding it together.

Once, I couldn’t resist checking out the inside of an abandoned beauty, and almost took a step that would’ve landed me in a water-filled stone cellar; jagged collapsed floorboards gaped up at me like a monster’s jaws. My car was so far out in the country no one would have found me for days. I kept my balance that time, and didn’t go inside too many houses thereafter.

A roof can take a lot, but each snowload takes a toll as they sag, slowly surrender, and eventually give way, their weight often collapsing parts of the floors below them. Just like in the “Three Little Pigs” story, stronger houses survive better. The winds and the storms will huff and puff over time. Trees fall, eating huge chunks out of wooden homes. A brick house (like the 18th century one, pictured) will stand longer than a wooden one. Just like it took more effort to construct (the older the brick, the more likely it was made by hand), it will take more effort to destruct. Eventually, all you’ll see are four brick walls standing in their rectangular formation, the rest of the structure returned to the earth it once came from. And eventually, the vines will tear those four walls down too.