The latest collection of Invincible is hard to put down. 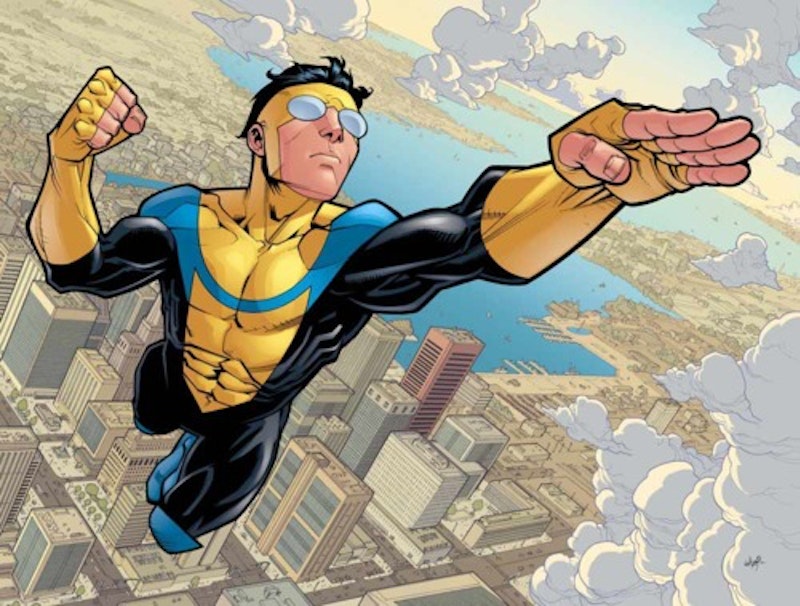 Invincible “ultimate collections” usually bind together 12 issues of the popular comic. The latest, volume 7, collects 13 instead, a fact overlooked until I started to puzzle out this review. Why you should care about this: I had read the whole thing through in a single sitting. The plots, the pacing, the art, the characters all came together to create a comic that I couldn’t force myself to put down.

The series combines several elements of the Superman mythos with the teen soap opera Stan Lee injected into comics in the 1960s. Nolan Grayson is the super hero Omni-Man, a flying, strong, practically indestructible alien who looks like and makes his home among humans. He takes a human wife and fathers a child they name Mark. Omni-Man works to stop global threats, foil crime, and fly kittens safely down from tall trees. If that sounds too good to be true, it is. Turns out he's really he's an agent of the Viltrumite empire preparing the planet for planetary conquest.

That was the state of play a few collections and several dozen issues ago. Nolan neglected to clue his half-human, half-Viltrumite son in on this plan of conquest until very late in the game. This proved a huge mistake. Mark grew up human and believed his father's people to be explorers and heroes, not vicious conquerors and pillagers of worlds. When his powers kicked in during his teen years and he took to super hero-ing as Invincible, he thought of it as a calling, not a cover. Naturally, when his father asked him to join forces to subjugate the human race, he refused. There was of course an epic battle.

Several twists and turns and bruises later, Nolan and Mark have reconciled and are leading an intergalactic, armed resistance along with Mark's new half brother and teen sidekick Oliver. The series technically takes place within Image's larger universe of characters, but Kirkman doesn't need them and it shows here. He's created a huge stable of personalities during the series' run and in other comics. To wit, Tech Jacket was a character that got a six-issue run in 2002. He shows up in the latest volume as an important supporting character in the war against the Viltrumites.

There are several “meanwhile on earth” aspects to this story. We know, but Mark Grayson does not as he goes into battle, that his girlfriend Eve is pregnant. Deep in the bowels of the Pentagon, the ever-crafty Cecil readies for a possible invasion by the Viltrumites in case things go badly. There are a few missteps this time out. One of the characters decides to go all Captain Planet, for instance. But the flaws are minor set against a large, intergalactic canvas.

Creator Robert Kirkman is the only non-founder of Image Comics who was cut in as an owner and the only writer to join the now 20-year-old club. He is best known as the not-yet-devoured brain behind a certain zombie franchise. If The Walking Dead can be taken as Kirkman's definitive statement on zombies, then this is what he has to say about caped crusaders. He has been assisted in this adventure almost since the beginning by the pencils of Ryan Ottley. The two have learned to work together effectively as the series has grown up. Kirkman has learned to give Ottley scripts with more room to improvise on the page, as we can see vividly in the war scenes. Some folks believe that their collaboration is the best classical super hero comic being published today. I don't know of a better one.