The Irritating Boy at the Next Table

He kept playing with the damn pepper shaker. 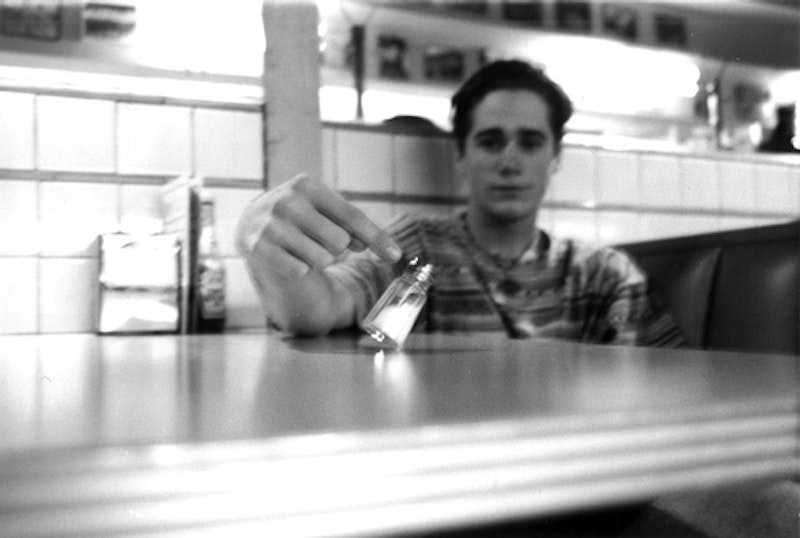 I was drinking my coffee and fixing the endnotes to a manuscript about Korean puppets. (The editor had been unclear about the formatting he wanted.) The boy at the next table was playing with a red pepper shaker. By “boy” I mean late 20s, and the pepper shaker was a shiny, plastic, modern-looking thing. It had unexpected bulges, and at other points the contours planed away and the thing went skinny. He stood it on the table with his finger against the dome at its top, knocked it over, caught it, spun it. He did all this with one hand. I watched him from the corner of my eye, and the girl who was with him watched too.

Age-wise, I use “girl” in the sense I use “boy.” We’re talking young man, young woman. He had a large chin and curly red hair—it was sort of an auburn bush—and he had a stomach. Standing up maybe it didn’t show, but when he was sitting down it sure did. The girl was a good deal smaller and had a snub nose. Her hair was yellow-brown, a pleasant shade that’s often seen in this part of the world, and she had done much more listening than talking.

“Start from that basis,” the boy said, “and obviously that’s where you end up. I don’t see anything too major to that.” He slapped the pepper shaker with his finger, caught it. That grabbed my eye, but I’d been listening anyway. They were a couple tables over, with no one in between us, and his voice carried. He and the girl had been hashing out one of those stop-and-start topics, the sort where neither voice can really get going but neither can leave the subject alone. Spend your time in coffee shops and you hear a lot of conversations, and this was the sort that’s hard to ignore.

“It just seems like,” the girl said, “if you had talked to him, then there’d be some basis for …”

The boy, suddenly sober, said, “‘Basis’ is a tricky word. For example—” He paused as if about to say something, and she lifted her chin. When talking with men who like to hold forth, women often put a look on their face, one that says, “Something important is about to be explained to me, and I shall stand by to receive it.” She had that look now. In response the boy waited, then waited some more, and the moment stretched out. Then a slow smile broke across his face. I sort of got what was going on: “Basis” wasn’t a tricky word after all. He had just faked her out, and she was supposed to enjoy his antic, quicksilver playfulness.

The girl smiled too, a much smaller smile, and picked up again. “But if you had talked to him,” she said. She was being reasonable. I don’t mean she was playing the part, which means going for the singsong tone and the “I’m patient” intonation. From what I could tell she was just being reasonable.

The boy laughed. “This is something I know about,” he said. “Okay? The psychology of—” And he said a man’s name. I assume it was the name of a professor at the university here. “The best move, I mean absolutely the best, is to cut clean and just, just cut the bullshit.”

“I mean, he’s lying in wait. Conversations like the one you want me to have, that’s his meat. He wants the drama. He wants to get embroiled.” The boy said this with decision, and I thought he might rap the pepper shaker on the table. But instead he did the same trick as before: slapped it over with his top two fingers, then curved his bottom two fingers around it before it fell. All with one hand. He kept doing this irritating trick over and over. He was good at it, which made things worse.

“When it comes to his expertise, he’s not somebody who can be talked to,” the boy said to his pepper shaker. “Look, I mean, if he’s going to say—” And there followed a string of words and phrases that I’m not qualified to understand. Linguistics? Could be. It was some specialty shared by the parties involved. The boy rattled off his piece in the staccato way grad students sometimes use when showing how deep they can march into the weeds.

What struck me was the girl’s face. At first the “yes, explain to me” look started to form; then it was gone. Her mouth became small and her eyes went flat. And then her face was back to normal, or pretty much: no “explain to me” look and no fed-up look. I think getting rid of the second took some will power.

The boy finished up. “But why create the situation?” the girl said.

Her friend was greatly amused. “I don’t think I’m responsible for the man’s personality,” he said.

“If you know so much about his personality and all these problems, then why, why… I mean, the seminar and what you said to him.”

Let me stipulate here that I never figured out what the boy said in front of the seminar. But the mention of it caused him to shift his weight back in his chair and roll his eyes toward the ceiling. The pepper shaker held still while he did so.

“A professor didn’t say it,” the boy told her patiently, as if too big to underline what a point he was scoring.

The girl looked at him.

“They all laughed,” the boy said. He tapped the pepper shaker on the table and his voice rose. “‘Don’t talk to me about could and would and should have,’” he said. “‘Sometimes truth is a thing you have to spit out like saliva.’” He said this exactly like Bette Davis. I had to admire the effect—it was eerie. He added, “From These the Stars, 1946.”

I saw the girl sag. “And you’re just going to start your life over,” she said. “You’re lucky you got in this program. I have to tell you that.” And his big face did look hurt. “All right,” the girl said. “That’s how this works. You get in a hassle and it’s just, it’s… ‘Oh well, now my life begins again.’”

The boy’s mouth had gone very small. “Uh huh,” he said. “Yeah, all right. That’s your viewpoint.” Silence. Then: “You know, this is something I think you should understand. When we were at Brown—”

“I graduated from Brown,” the girl said. “You didn’t.”

From face and posture, it was like he had gauged for the first time all the rudeness that may be found on our little planet. “I didn’t say I did,” he told her.

A longer silence. “All right,” the girl said. She stood up. “See you around,” she added, and she left.

The boy began playing with the pepper shaker, then stood up and fetched a piece of newspaper from a nearby table. When he sat down again his pen danced along. He was doing the crossword or some other puzzle, and he got it done very quickly. He pushed the newspaper aside, picked up the pepper shaker.

Then, without looking, he tossed it overhand. We were sitting on a cushioned bench that ran the length of the wall, and there was nobody else around, so he could do this. The pepper shaker bounced against one of the tables and dropped to the floor: clunk and another clunk. The boy stood up a second time and I thought he was going to leave. But he came back with another section of newspaper and soon his pen was dancing along again. That’s how I left him.

Later I Googled the saliva quote and From These the Stars. No such phrase, no such movie. I guess he made them up on the spot.