The Old Man and His Boy

Life seems to begin around the age of five or six. 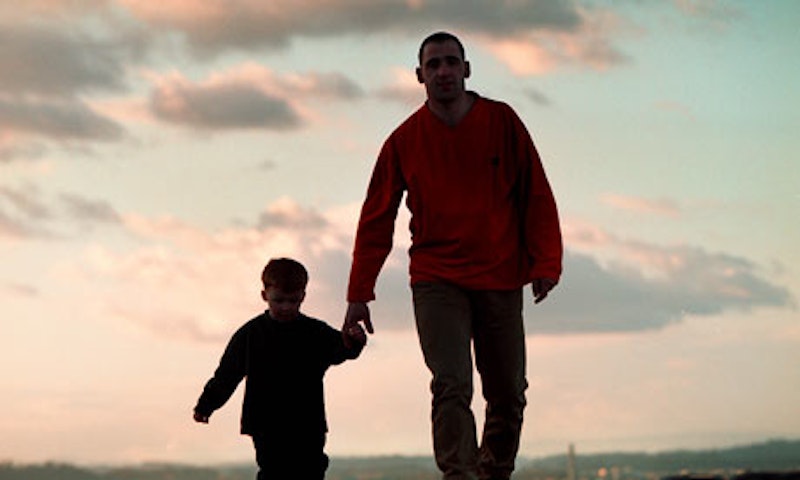 Usually we’d go to out to the Dunkin Donuts on the Reisterstown stretch of Reisterstown Road. We’d go in, sit at the counter, and order: milk and a toasted coconut donut. The employees always had crude, shapeless tattoos their uniforms couldn’t obscure and never seemed especially thrilled to be there. But it was Dad and me, so it was great, and those trips are some of the earliest memories I have of him. I don’t remember the Washington, D.C. apartment we lived in before the Owings Mills townhouse, and recollections of my parents as a married couple are vague, at best. Life doesn’t begin at conception, or even at birth; life, it seems, begins roughly around the age of five or six.

My son turned five last September, a relief and a boon. A relief because his childhood up until now has been reasonably free of tumult and because he’s unlikely, by now, to forget me; a boon because I’ve suddenly no choice but to live up to whatever my ideal of a father is. That shouldn’t sound scary, but it is, because it necessarily demands taking stock of a) who I am, and the way I relate to my son and b) the sort of father I have, and how I relate to him. (He won’t remember Maryland or Pennsylvania; his world will begin, for good or ill, with Texas.) And that means coming to grips with the fact that for all intents and purposes, I am my father—I pine for libraries and bookstores, savor art, accrue musical matter, crave solitude, am fascinated by politics, am more observer than actor, am rangy but crooked in profile, look more serious than I am, rock a ‘stache—and that Nodin is me as a young boy.

It’s all there, of course: the tendency to ham, the imagination gone haywire, the standoffishness, the pouting. My father used to needle me about that, gently. We’d be driving to or from somewhere, and I would be frowning without quite knowing it. His gist would be that there was plenty to be happy about, usually followed by an exhortation to take note of my surroundings, of details. (This tactic didn’t ultimately work. People still think I’m piqued even when I’m happy as a clam; I may have inherited this trait from both parents.) This was a general program note, one might say, a Robert Cummings Jr. standard, but the method to that particular memos was grounded in his knowledge that I wanted to grow up to be the writer he had wanted to be, so tuning out the scenery was less of an option than it might have been.

A lot of our time was spent in libraries: the Randallstown Library, the Pikesville Library, the Towson Library. Dad was a Johns Hopkins University graduate; during the years when he lived across from the Homewood campus, visits to that library and the adjoining outdoor common areas were part of the routine. There was a machine where one paid 35 cents for a soda—I liked ginger ale—and the soda was dispensed into a paper cup you’d take with you. Somehow I acquired a blue folder with a topographical map of the Homewood campus that was endlessly fascinating to me.

There were the affirmation cards, the New Age music, the self-help retreats and guides, becoming affiliated with a Unitarian church. It all was a bit odd and desperate to me then—even if it registered as just odd—but in retrospect I can see that this was Dad’s attempt at reinvention, at becoming a more positive and assertive version of himself. It likely paid off professionally and socially, but it definitely paid off parentally: my father is one of the most relentlessly upbeat and glass-half-full people I’ve ever known. And that’s the kind of dad I try to be today, even though being that guy is a tall order; the dad who makes lemons into lemonade and listens patiently and imparts sagacity while exuding calm. But also the dad who will get down on the carpet with Nodin to do epic Power Rangers/Ninjago battle, something my own father wouldn’t have done, and the dad who laughs easily enough, and a dad borne of spontaneity and forethought alike.

Meanwhile, I revel in the echoes. I read the same Chronicles of Narnia novels to Nodin that my father read to me, and he rides his training-wheel equipped bike around our neighborhood with me close behind, the way my dad used to cheer me on when I was getting comfortable on my bike in to the shopping center parking lot across from our house on Sundays. Little League soccer is becoming a comfortable sport for Nodin in the same way it was for me when I was his age. We have our favorite parks to chase and run and play ball in the same way that Dad and I had our special haunts. And whenever we convene early on weekend mornings to quietly enjoy vanilla yogurt together—Nodin usually enjoys a children’s serving size, but the day fast approaches when that won’t be nearly enough—I flash back to my dad and his economy-sized container’s of plain, Giant-brand yogurt, and I can’t help but smile to myself.