Drink Responsibly During the Holiday Season

An ongoing story about hot takes, brand-building and now the wonderful time of the year. 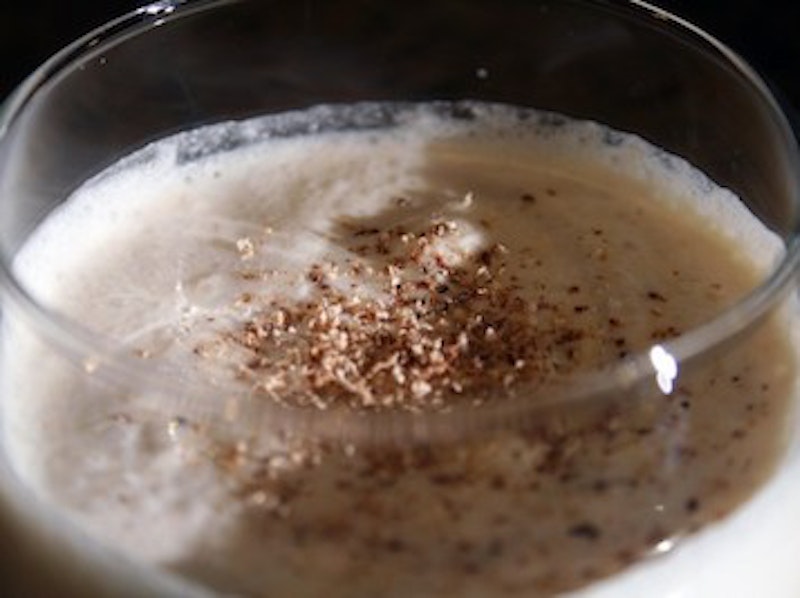 Someone at the co-working space’s semi-annual holiday party offered Oscar Berkman a cup of eggnog.

“No thanks, I don’t drink,” Berkman said. “It’s a matter of personal choice.”

“I refuse to trust any man who doesn’t drink until he gets rip-roaring drunk,” the Chief, who was Berkman’s editor and boss, chimed in from across the room. “So I don’t trust that son of a bitch Berkman! Not at all! He’s too good for us plebes and too big for his fucking britches!”

Yet the fact remains: At a time when his colleagues were trying to loosen up and forget another unbearable and unremarkable year, Berkman kept sober vigil, remembering and judging them all.

“Berkman, what a son of a bitch!” the Chief kept exclaiming, hopin that everyone understood there was something wrong with his employee. “He ought to go suck an egg!”
•••

According to a listicle Brian Powell had just written for the disruptive Millennial media publication that paid him in “sweat equity” and “influence,” there were 10 things to do in the big city before dying. Alas, Powell, who suffered from terminal cancer as well as a broken heart, never got around to doing any of them. He did try to attend the city’s annual “Light-Up Night,” which was all kinds of a big deal, but it was cold outside and he couldn’t bring himself to leave his shoebox-sized rat hole of an apartment. His life, or what remained of it, was funny like that. He thought about tweeting something to that effect, posted the tweet, and then quickly deleted it. His social media feed, or what remained of it, was also funny like that.

Geeky freelance pop-culture blogger Danny Cater often wondered why he wasn't a hit with the ladies. Women were always blocking him on Twitter after he slid into their DMs, even though he just wanted to initiate a meaningful rap session about feminism, comic books, toxic masculinity, and the trading of “NSFW” selfies.

Danny’s folks had a lot of dough, and bought him a condo in Los Angeles, where he could pretend that he was busy “pitching shows” and the other nonsense that creatives claim they’re doing to fill the idle hours that comprise their pointless lives. His folks gave him a little allowance, too, and this he saved for a few months so he could afford to go to the Bunny Ranch, that famous brothel in Nevada where it's legal. He was determined to lose his virginity before he turned 40.

Given to thinking in pop culture cliches, Danny saw his life as a romantic comedy that was only sometimes tragic. Hoping to reward himself an early Christmas present, he drove his itty-bitty Fiat coupe to the house where the bunnies lived. He tried to calm his breathing. He sat in his Fiat in the hot dry sun. He never got out. He drove back to his condo. He never went back to the Bunny Ranch. He wrote a funny tweet about it “getting [his] cherry popped” that got five or six likes and a retweet.

Danny thought his life was only sometimes tragic.
•••

“They ought to put an asterisk next to every one of his statistics,” Broadsides, who had bolstered his own play with a diet heavy in B-12 shots, spousal abuse, and amphetamines, groused to a reporter. “It’s a tragedy and a farce. The players today don’t give a damn about the integrity of the game,” he continued.

The integrity of the game, which Broadsides had striven to uphold through corking and pine-tarring his bat and refusing to insert an African-American player into his team’s starting lineup until the team’s owner threatened to fire him, meant everything to this legendary coach.

The young couple desperately needed a car to get to their parents’ house for Christmas, a trip that comprised six states and nearly 500 miles. “This one will get you there,” increasingly desperate used car salesman and retired police officer Jack Chaser assured them.

“Will it? We’ve got only $5000 to our name,” said the husband, looking as forlorn and innocent as any fella who had ever lived.

“You betcha,” said Chaser, who figured that there was always a chance that it might.

“I’m so happy there are fine people like you in the world,” said the wife.

Chaser smiled his dead cold grin. “Ma’am, it’s Christmas. This is a season for giving. And I’m always happy to give folks a great deal.”

The husband patted Chaser on his shoulder. “You’re a saint.”

Chaser’s smile widened. “He knew now that at the end there was only one thing that counted—to be a saint.” He remembered reading that, but when and in what book? Did he even read books? Perhaps he had read them on his longer stakeouts. It didn’t matter, though. The former Detective Death’s life to date had been one long, dark ride. Maybe he’d finally become a saint. Who could say for sure?