Diary of a Bushwick Buyout #3 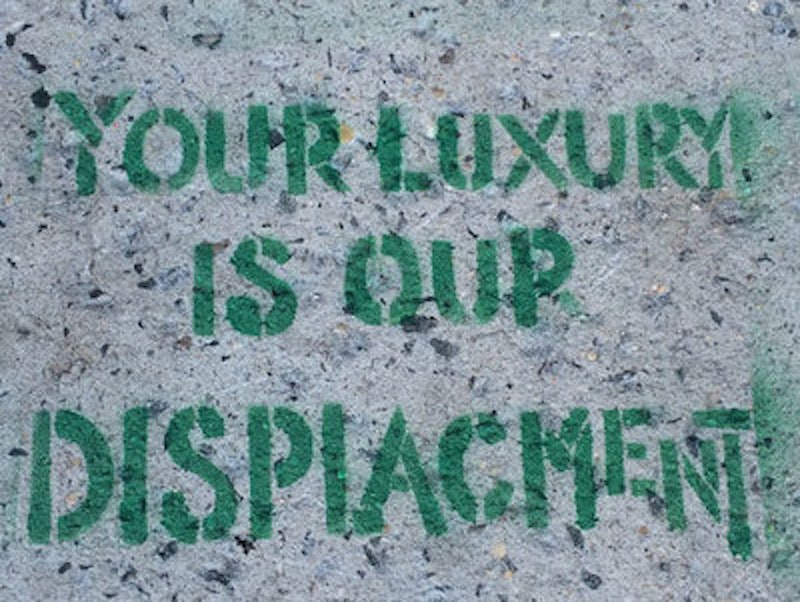 Two days after Paul did his walk-through promising me the stars in the superintendent sky, I heard another knock on the door. I’d been working from home. “It’s Paul again. Super!” I eyed the peephole and this time Paul escorted Geoff, the owner, who palmed a phone around which he wrapped the headphones. Because Paul had flaunted his boss’ reputation as an untouchable billionaire, I was humbled like a peasant about to open his door to the king. In my lion-print shirt and flowered cap, I felt the faintest bit self-conscious of my dress and the beat-up furniture of my apartment. Geoff was a gym-bro Ken doll, about 35, faux military with sunburned muscles and a shaved head to look harder than he really was in his v-neck t-shirt and casual-chic jeans. I imagined he dressed down to appear on a level with super Paul. The pair of beefcakes could’ve tag-teamed a sports bar or club. I let them in reluctantly. All that morning, before they came up to my place, activity could be heard throughout the building and in the courtyard. Paul’s voice was in the mix with another man’s—Geoff’s, it turned out.

“Brought the owner with me to meet you,” Paul commenced. Geoff and I shook hands. “Hi. Geoff. I own the building.” Though his gray-blue eyes briefly penetrated my own, we mostly played a game of chicken. For a landlord, Geoff seemed, right off the bat, uncomfortable, anxious, even a tad pissed off. His energy and attention were scattered as Paul and I established the context of the 311 call. Geoff scanned the kitchen and rooms in accordance with his own market-rate vision, not much concerned about the quality of life complaints of current tenants. “So what’s wrong here? You have complaints?” Geoff asked in the kitchen. Paul and I rehashed a lot of the lingering issues. Geoff was the type of guy to half-listen as if certain small details of rent-stabilized living were beneath his dignity. His impatience made it plain that he wanted to cut to the chase. It was pit bull Paul on the end of Geoff’s leash who kicked off the buyout talk. That caused his boss to light up and take over. “So yeah. Like Paul says, if you’re interested in a buyout, you let me know. Are you at all?”

“Well, Paul said the offer stood at $24,000 but, as you know, that ain’t gonna cut it,” I said. My thinking was to be Socratic, to feel these guys out and see what they were willing to hear or say. Paul butted in but Geoff cut Paul’s yapping short. “Okay. It’s my money! So you tell me what you think is reasonable. What are you talking about?” Geoff folded his arms. I replied with the line of reasoning I’d rehearsed with my friend Margo. “I did my own research. You’re a businessman, right? An investor. And you know from your analysis that Bushwick is a hot commodity, with the availability of the train, the bars, the artists, and fancy restaurants. You understand that it would be a real trade-off to leave a rent-stabilized place like this. I’m never going to find cheaper, and I love this community. So I was thinking $350,000.” Geoff tilted his head back, and he and Paul laughed their heads off. “Man, that is insane talk. Isn’t it, Paul? I know the financial picture. This apartment isn’t worth that yet. You’re talking Manhattan prices,” Geoff explained.

“Yeah, but things are heading in that direction,” I countered, “or you wouldn’t have purchased a number of buildings here.” I was testing the waters of negotiation. I said that I loved Bushwick’s arts community and took advantage of all the parks, galleries, gardens, and the coffee shops where I did my work. I argued that while a buyout would cause me to give up my affordable apartment in this nice old building and a foothold in the thriving, peaceful neighborhood, a large amount of cash would conceivably help me go to grad school. I arrived at this unique angle after reading an article in The New York Times about the brothers of G-- L.L.C. The profile highlighted their enviable educations at the city’s distinguished universities. Only I was foolish and selfish enough to think the premium they placed on learning would extend to the buyout they would offer a total stranger. Geoff deflated that prospect. “I hear you, bud, but really you’re talking a Manhattan scenario, and even then you wouldn’t necessarily get that kind of money. Manhattan and Brooklyn are night and day.” That was my signal to play no other cards. I redirected focus to the apartment issues. With Paul’s help, I led Geoff on a tour of the rooms.

In my bedroom doorway, Geoff peevishly pried, “So, tell me, what is the M.O. of this tenant association?” I kept it short and sweet. “Just to ensure habitability in the apartments.” He was hot because other tenants had made 311 complaints, which brought fines. “My thing is,” Geoff explained, “you have to give us a chance. We just acquired the buildings. If you have issues, you come to us first. We have a super. It’s Paul.” I mentioned in front of Geoff that my window was broken and not secured, and that one night an unidentified guy came up on the fire escape to start trouble with me. Paul said to Geoff, “Hear that? He said he don’t know who that was. I tell him it was probably one of the black Spanish guys down below who cause trouble and smoke the weed. We see them on the cameras selling.” Geoff agreed, “Oh yeah. Those punks.”

As we made our way out into the living room, Geoff pleaded, “Hey, I’m going to give you my personal number. Okay?” He wrote it on a small paper slip, like that in a fortune cookie. “Don’t give it out to just anyone. I don’t want folks calling me like crazy.” He chuckled like George W. Bush. “But protocol is you call Paul first. If you don’t get what you need from Paul, you call me. And I’ll hold Paul’s feet to the fire. Don’t go to HPD again! Please!”

I said thanks. “You obviously provide a higher quality of customer service, unlike the previous landlord who was a slumlord.” Geoff testily shouted a sort of amen. “I’m not like that! God, you guys act like I’m some evil person! At the garden, for example, everyone in the tenant association gave me the stink eye. But I’m not some bad person. I care about my tenants and this community. I’m not the previous landlords. Those guys were scum. I care about people here.” We were back in the kitchen. I asked Geoff, “And if people want to stay, then what?”

“Then they stay! It’s the law. I can’t just kick them out. Like I say, you want the buyout, fine. You want to stay, well then I’ll see you around the building!” He explained how the buyouts were not in cash. They were checks, with a down payment, and then the rest would come once the key was obtained and the final walk-through was completed. “How many tenants have taken the buyout?” I asked.

"I can't tell you exactly, but I got about 20 or so apartments, in the several buildings, that are taking the buyouts," Geoff shared. A subdued Paul gave his goodbye and left Geoff alone with me. We took up the buyout discussion once more. I mentioned that the de Blasio administration papers in the local library warned against buyouts and said that even $75,000 would get you nowhere after taxes and a definite loss of rent-stabilized living. Geoff looked repulsed. “No offense, bud, but de Blasio doesn’t know what the hell he’s talking about. I can tell you. I have several buildings as investments, and I know the values and what I can afford to pay out. I’m not converting this place to condos. I tell you what I can do. How does $40,000 sound? Here, I’m making a note in my phone. Apt. #-- gets $40,000.” By that point we were sitting on my blue velvet Craigslist couch. I said I’d have to consult my roommate.

In round one, the owner pretended to treat me fairly. He shook my hand again and left with a promise to make himself available whenever I wanted to talk. I locked the door. I was not interested really, because I did not want to destabilize the building, cheat myself, and fuck over families who depend on the affordable housing. Damn it. I felt ill.