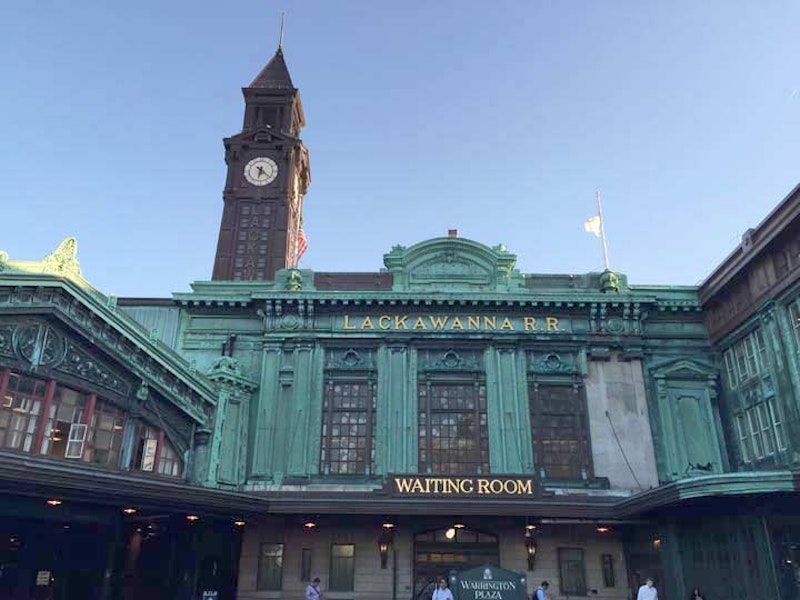 Since March 2016 I have been commuting to a freelance job at Pearson Educational Publishing in Hoboken, NJ. I don’t enter Hoboken Terminal (officially, Lackawanna Terminal, its original name in 1907, given for its connection to a long-deceased railroad, the Erie-Lackawanna) every day, but I’m comforted by knowing that it’s there and will likely be there for decades to come. This is the first time I have ever worked in Hoboken, but I have been a frequent vistor over the years, drawn by the architecture, which reminds me of Brooklyn, and that fact that its oddities and remnants from the old days aren’t purged as maniacally as they are in NYC.

The exterior, rendered in copper that is marvelously verdigrised in a bright shade of green, provides reminders to its status as both a railroad and ferry terminal. This was where the Delaware, Lackawanna, & Western Railroad Company (merged with the Erie Railroad in 1960 to form the Erie Lackawanna) lines pulled up short at the edge of the Hudson River and discharged passengers to ferries ran by the NY and Hoboken Ferry Company, whose boats were comparable in size to the still-extant Staten Island Ferry. The height of the NY&H came before World War I, however. After that the Holland and Lincoln Tunnels, bearing cars and buses, greatly diminished ferry traffic, and the NY&H’s ferries last ran in 1967. Today, smaller ferry companies such as NY Waterway runs smaller boats.