Where are all the presidential campaign signs in Baltimore? 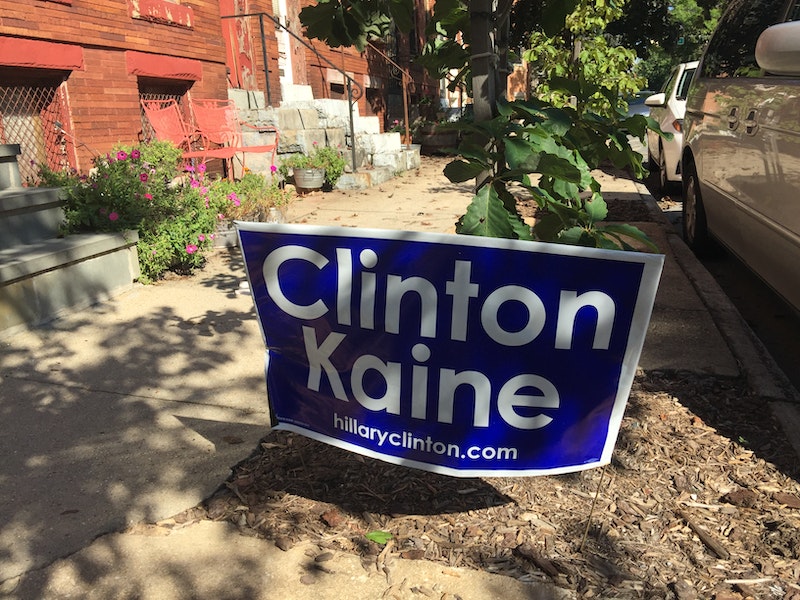 It’s the first week of October and I finally saw a presidential sign outside a residence in Baltimore City. I understand that placards, buttons, balloons, and other campaign paraphernalia—at one time a fixed expense for candidates from town supervisor to president—are almost, but not quite, an anachronism, on par with ward heelers, dragging rummies out of a bar and giving them a fin to vote, and hand-written totals changing every five minutes on Election Night, but the near-absence of signs really does surprise me. It wasn’t this way in 2008 and 2012, when, in very liberal Maryland, you couldn’t walk a block without seeing an Obama poster. Even on my secluded street in North Baltimore, neighbors proclaimed their preferences in big ways: down the street, my friends Frank and Paul, dedicated Democrats, decorated the outside of their home as if it were Christmas. Not so this year.

So I was walking the other afternoon on sleepy E. 27th St., and there (picture above) was a Clinton/Kaine sign, outside a rowhouse that I like a lot for all of the owner’s potted plants that change with the seasons. I’ve read a lot of stories, maybe not factual, of skullduggery in other cities and towns, as detractors of both Trump and Clinton make midnight raids to rid the environments of these mild forms of expression. But not in Baltimore. (It’s not just the city: out in Baltimore County, there’s a similar lack of signs.) Which is weird, since earlier this year, with the uninspiring mayoral race coming up—you’d have thought that after the Freddie Gray controversy last year voters would’ve had alternatives besides lifelong political hacks—the city was festooned with all manner of campaign ephemera, some for really minor races. It was a low-key election, about a one compared to the 10 of the Clinton/Trump nastiness, so it’s baffling. Sure, it’d be stunning to see one of the eight Trump supporters in the city wear a button or affix a bumper sticker to his or her car—here, you’d need balls the size of an elephant to risk ridicule or minor violence—but why no Standing With Hillary gee-gaws? She’s an unattractive candidate (policies, not looks), yes, and maybe this presages a low turnout on Nov. 8, but I’m still stumped.

On Monday, New York Times scold Paul Krugman warned his readers (talk about sermonizing to a friendly audience) to overcome their complacency that a Clinton victory is in the bag. He wrote: “[I]t’s dismaying to see the fecklessness of those on the left supporting third-party candidates. A few seem to believe in in the old doctrine of social fascism—better to see the center-left defeated by the hard-right, because that sets the stage for a true progressive revolution. That worked out wonderfully in 1930s Germany.” So maybe the “Trump is Hitler” cry (never mind that Trump is “far-right” on some issues, “center-left” on others), not confined to Krugman, is the new street sign.

Now, just as the size of campaign rallies—as losing candidates find out when the returns are tabulated—is an inaccurate gauge of support, so, too, is the amount of signage for any candidate. It wasn’t always this way, of course, as I noted above. As recently as the early-1980s (“recent” to me, at least), my good friend and co-political reporter Phyllis Orrick, writing about local politics for Baltimore’s City Paper, would chug around all parts of the city in her beat-up jeep, and take count of all the signs. In 1982, for example, it gave us a good indication that long-shot Kurt Schmoke was going to upset incumbent State’s Attorney Bill Swisher, as we noticed all sorts of signs and rallies for Schmoke (later the first black to be elected mayor of Baltimore) in Swisher’s base of South Baltimore. Schmoke went on to become Mayor in 1987, while the late Swisher (he passed away last year)—unfairly tarred as a bigot—went back to his law practice, and, in fact, was a really good guy who accompanied a bunch of us on St. Patrick’s Day pub crawls. In fact, his equally genial son, in ’84 or so, was an intern at City Paper.

“Sad” is a word that’s temporarily been ruined by the Trump campaign—and the imagination-impoverished journalists who post negative tweets about him—but I do miss all the penny-ante hoopla that surrounded campaigns. It goes back to my youth, when, staring in ’64 as a nine-year-old, I’d raid campaign headquarters of both parties in Huntington, NY and stuff my pockets when the volunteers weren’t looking with LBJ, Bobby Kennedy, Ken Keating, and Barry Goldwater buttons and bumper stickers. My collection was impressive, in no small part due to my mom, who gathered material for me—a middle-aged woman, she was taken more seriously at the storefronts—not only in ’64 and ’66, but most notably on a Southern road trip she took with my dad during the shank of the ’68 election, bringing home big old George Wallace buttons (and, not incidentally, two cases of then-regional sodas Dr. Pepper and Almond Smash), the likes of which you couldn’t find on Long Island.

Once, at a 9th grade history show ‘n’ tell class in ’69, I brought in part of my stash, which was considered kind of nerdy by classmates—which ticked me off—but Miss Taylor, a sexagenarian old-timer at Simpson Jr. High, was delighted and gave me an A for the project. Hell, it was a lot more interesting than my friends’ collection of model airplanes/boats or sketches and photos of Abraham Lincoln and Teddy Roosevelt. (I’ve wondered whether those kids who assembled airplanes also huffed the toxic glue.)

What does this random observation tell me about the election? Almost nothing, except perhaps that Clinton’s turnout in Baltimore City will be puny by historical standards, not that she’ll be denied Maryland’s 10 electoral votes. Also, it means this election is still up for grabs: if similar disinterest for Clinton (and let’s not forget pissed-off Bernie fans) is evident in battleground states—despite what the polls of the day say—Trump might pull off an upset.