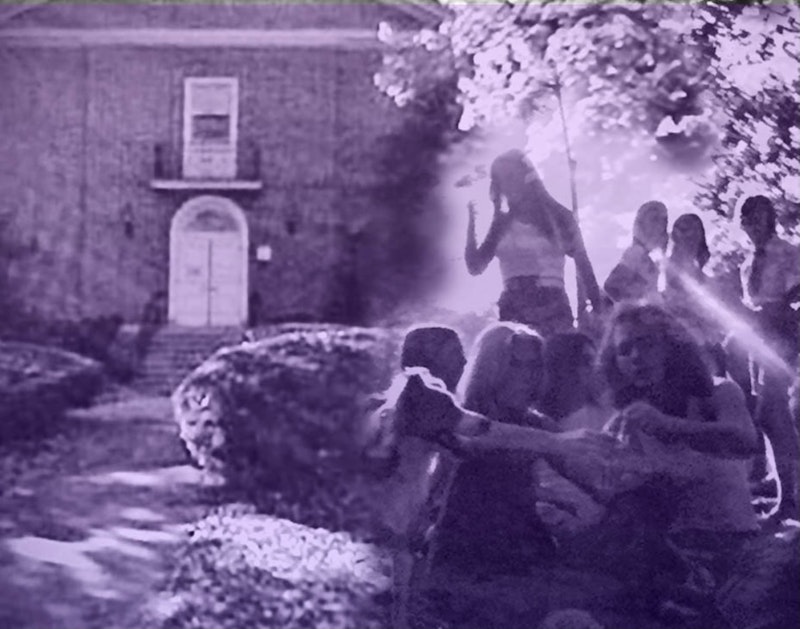 I’m having a flashback.

A counterculture refuge existed in Baltimore during the early-1970s. They came from all over: Arbutus, Perry Hall, Hamilton, Mayfield, Belair Road, Lutherville, Parkville, Woodhome Heights, Overlea, Stoneleigh, Idlewylde, Waverly, Guilford and other surrounding Baltimore neighborhoods. Their destination, an “underground” El Dorado, a place that opened the doors of perception and guided our vision of the future.

Crossroads is often overlooked but played an intricate part of Baltimore’s music history during the height of the Vietnam War. If you ever went there, you never saw much coffee, just warm soda in a Dixie cup. Crossroads was our weekly chance to have good times with friends, catch a buzz and see bands play on Fridays or Saturdays.

Wait a minute, high schoolers comfortable in their own skin? Look out, what it is—peace signs, blue eyeshadow, head shops, flower children, Cinnamon Girl looking for a Neil Young— the very nature of Crossroads started with a song.

A benchmark version of “Crossroads” appeared on 1968’s Wheels of Fire by Cream featuring Eric Clapton and the late Ginger Baker and Jack Bruce. The song’s performed live to perfection. And to be honest, at the time, we only knew the Cream version, in addition to countless other covers. In the 1970s, as a teen you were able to go out without parental supervision; that meant freedom. Come on, did you lie to your parents about where you were?

The late-afternoon shadows chase the sun. Several teens hid behind shrubs and bus stop benches. They waited. The girls stood curbside or just in the street. Thumbs went up. A hippie van stops. The VW pops open its door, and everyone piles in, off to Crossroads.

Crossroads was situated in an unconventional location, the basement of a Presbyterian church off Loch Raven Blvd. in North Baltimore. A landscape of young bohemians gathered on the church steps. Teens roamed the surrounding grounds. Couples with dogs and guitars lay on the grass burning incense and rolling doobies. The Fuzz left the place alone. An invisible church staff always kept a watchful eye.

“Hey, sunshine. Rest your eyes upon the beautiful people who came out to indulge.”

Kenny Kendig arrived with a boa constrictor wrapped around his arms. Tommy Reed passed by, all stoked-up in mile-high platform shoes. The regulars consisted of mostly older teens, many still living with their parents.

Crossroads was full of excitement. Called “underground” because you descended down a flight of stairs into a dim lit, big room with a green linoleum floor. The air was thick with an array of fragrances: warm breath, zesty lemon, musk and patchouli mixed with a dash of Prince Matchabelli’s Wind Song. “Gee, your hair smells terrific.”

At times, the room got so crowded, you could barely move. You had to squeak your way through the crowd. And it was always too warm, probably from so many teenage bodies dancing until the music stopped.

Some went out to play in the church’s greenery. The nearby woods made for great sneak-off spots. They were dark, perfect for messing around and practicing French kissing while leaning against big trees. Clouds drifted by a full moon.

“Please, don’t go down there.”

With all trips going south cancelled, we left the wilderness and headed back inside.

When bands played, their equipment was set up in one corner. It was a tight squeeze. A room divider gave them a little more stage area. During sound checks, musicians' nerves and instruments were set on high. There was some basic technology, heavy on the special guitar effects: Fuzz Boxes and Cry Baby Wah-wah pedals. We rocked it out with the music of Momma Max, Orange Wedge, Legend, Joshua and Cabbage.

There was wild fashion. Tim, a long-haired blond junior high student cited multiple times for disciplinary action, loved going each week. He had an American flag stitched to the back of his jacket and wore a pair of John Lennon rose-colored sunglasses. His prep routine consisted of popping five-six Crossroads. Tim swayed back and forth, spinning around in circles, barefoot on the sticky floor. You smiled and got dizzy watching Tim.

Kathy’s pupils were fully dilated. She snapped and twirled a piece of Juicy Fruit from Read’s Drugstore, then licked the sugar residue off the gum wrapper. The high school freshman troublemaker was on a 10-day suspension. Kathy batted her eyelashes in a flirtatious manner while wearing a loose-cut halter top that showed her backside dimples.

Some young women wore paisley, summer peasant dresses from the Pair Tree or Time Peace boutiques. Crossroads was like heaven for them because there was such an abundance of skinny high school guys.

Thread-wise, the daring youngbloods loved going commando. You could see the outline of their units in tight Peanuts jeans, three-button, low-rise with frayed bell bottoms. Their exposed chests had painted-on plaid or blue chambray work shirts or worn and faded t-shirts. If you were into denim, it was the Levi’s vs Lee’s thing.

Lots of people took drugs, but not everyone. And sometimes people took too many. For the sky pilots out there, there was a vast, diverse chemical ecosystem: Afghan hashish, Black Beauties, Placidyls, Windowpane LSD, acid on St. Joseph orange baby aspirin, purple micro-dot and orange sunshine, 714 Quaaludes, magic mushrooms, brown mescaline, $15 dollar lids of weed, Thai stick. And let’s not forget the house namesake, those little white amphetamine pills with crosses called Crossroads. We ate “speed” like candy.

Eddie, a 15-year-old from detention class, just dropped a 250-microgram gel of Windowpane. Eddie’s only desire was to get high. He knew anything this good came at a risk. A trip could take a sudden turn down Paranoia St. Bummer. It makes one wonder, “Why am I doing this?” As the night lingers on, Eddie’s trip gradually winds down. Just when he thought it could never end, it does. He closes his eyes and imagines being out on an open sea, riding the waves on a surfboard as mermaids wave good-bye.

It’s late, after midnight. TV stations were off the air. You’re probably not going to get much sleep. What’s the perfect thing to do? Go to Bob’s Big Boy on Taylor Ave., the only game in town, pretty much. After pooling pocket change, we’re off again, this time hitchhiking up Loch Raven Blvd, dozens of us at a time.

“Everyone take a chill pill.”

“Okay, keep it down.” the waitress said. The least zoned-out person orders.

Big surprise, the cover story we had a feeling was coming. The New York Times today announces:“Psychedelics Are Poised to Reshape Psychiatry. Colleges and Investors Rush to Get Involved.” Right, it’s been a long time coming.

If you want to know more about how acid culture was going to dose the world with LSD and make it a better place, watch The Sunshine Makers. Another exceptional documentary is Showtime’s My Psychedelic Love Story by Errol Morris. The film, inspired by Timothy Leary’s ex-love Joanna Harcourt-Smith’s book Tripping the Bardo with Timothy Leary, is a passionate look at complex times. Harcourt-Smith quotes Albert Hoffman, “It was just a tool to turn us into what we’re supposed to be.”

As a brazen youth who went to Crossroads, in retrospect, I wouldn’t change a thing. How it happened is beyond me.  I wouldn’t trade my Crossroads experience for anything. And to the folks in the VW with the killer hash, thanks for the ride. Maybe we’ll be able go to ‘strawberry fields, forever.’ That’s what I keep telling myself.