The Meat of the Matter

The Meatpacking District was a completely nocturnal world, much like its piscine counterpart on the other side of town, the Fulton Street Fish Market. 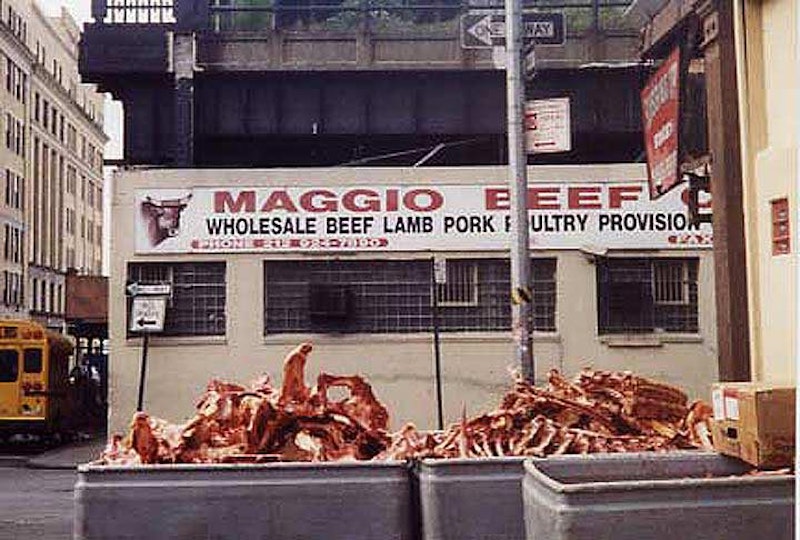 There are worlds within worlds in New York City. In Manhattan, there’s a small wedge of territory between Gansevoort, W. 14th, Hudson and West Sts. that was once the epicenter of Manhattan’s wholesale meat marketing and may have, at one time, contained slaughterhouses. It became known as the Meatpacking District and was a completely nocturnal world, much like its piscine counterpart, the Fulton Street Fish Market on the other side of town. All night, meat carcasses were cut up and prepared for market; at dawn, the trucks would arrive and using the West Side Highway, West Side Freight Railroad, and NYC’s various bridges, transport meat products all over the metropolitan area. The area had a Wild West flavor, and hookers thronged its streets and men flocked in for quickies in shadowed doorways or the odd room in a meatpacking plant. A biker bar known as Hogs and Heifers set up business at Washington and W. 13th, attracting celebrity slummers like Paul McCartney. The area was accommodating for gay liaisons, and late at night, white-coated meat cutters and high heeled drag queens prowled the region’s Belgian-blocked streets.

I obtained the above photo on a lunch break from Macy’s when I was working uptown in the offices of their flagship at Herald Square in 2000. At lunch I’d take the subway to all points in Manhattan and sometimes Brooklyn, camera at the ready. I was walking down Gansevoort and nearing Washington I spotted dumpsters full of carcasses in the midday sun. I was seeing one of the last gasps of a dying era because even then, most of the meat wholesalers were decamping to more spacious digs at the Hunts Point Market in the south Bronx. I saw this as historic gold and I think I’ve used this photo more than any other during my years working on the website Forgotten New York. 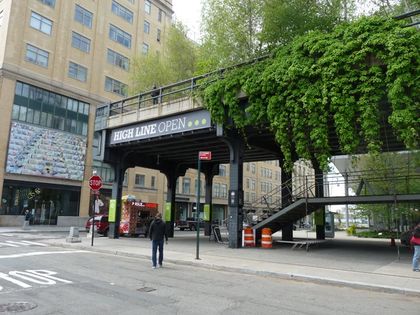 Above is the same intersection from a slightly different angle. The elevated freight line was transformed in stages from an active railroad to a linear park called the High Line. It opened in different sections from south to north, in 2009, 2011, 2014 and the final section at 10th Ave. and W. 30th in 2018. Its original concept was noble: an elevated park that would give area residents beautiful views toward midtown Manhattan or west across the Hudson. It didn’t work out like that, as developers flocked to the old railroad and built glassy residential towers that stymied most of the vistas. The neighborhood quickly changed from middle-class to upscale. The locals stopped using the High Line once the novelty wore off, and their places were quickly taken by tourists, who flock the narrow walkway so thoroughly in the warm months that making your way on the thing is a chore. I recently did so during a fallow time during the Covid Pandemic, and for me, it was just like when it first opened in 2009, except, of course, for the grand old views that have been blotted out. 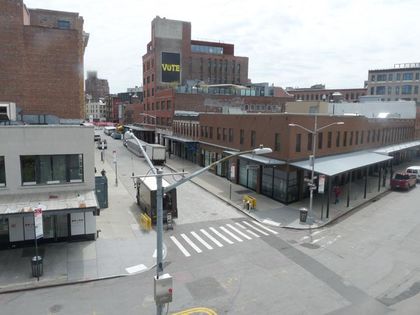 Before the High Line was built, the old meatpacking plants had their places taken by upscale clothing retail. Designer Dianne Von Furstenberg has offices in the area and she and her husband, media mogul Barry Diller, have underwritten a number of High Line improvements; their own venue, nearby Little Island, is due to open this summer. Crowds of shoppers are flocking these streets to look at the shops and eat at several new restaurants that have popped up. However, during my sojourn here, the streets were about as deserted during the day as they were when I first walked through the area in the 1980s. 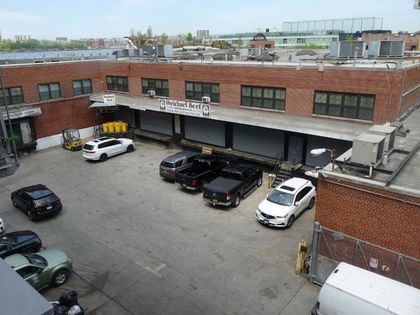 There are still some meat wholesalers in the area, confined to Washington St. under the High Line and on Little West 12th,  Interstate Food Inc., Weichsel Beef Inc., J.T. Jobbagy Inc., London Meat Corp., John W. Williams Meat Corp., Louis Zucker & Co. and Highline Meat Co. Most deal in a specific meat whether it’s beef, pork or lamb, so they’re not truly in competition. In the 1950s, more than 200 meatpackers thronged these streets employing over 3000 people. Cow carcasses swung on hooks and blood filled the spaces between the Belgian blocks. The remaining businesses received a tax break on their properties by ceding some land that went toward building the Whitney Museum’s new headquarters on Gansevoort. 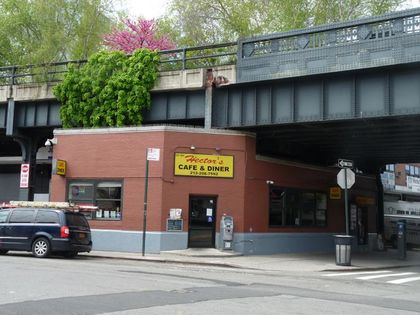 I always say I’ll eat at Hector’s, another survivor of the old meatpacking days. Even today, its odd hours are a leftover from the era; it opens at four a.m. and closes four p.m., except on weekends, when it closes. NYC loses more diners every year; I’ve since closed the Market Diner, the Del Rio and the Vegas in Brooklyn, and already bid farewell to the Scobee in Queens and the Cheyenne in Midtown. What am I waiting for? The prices remain quite affordable compared to the other high-concept and haute cuisine places that have sprung up in this neighborhood. 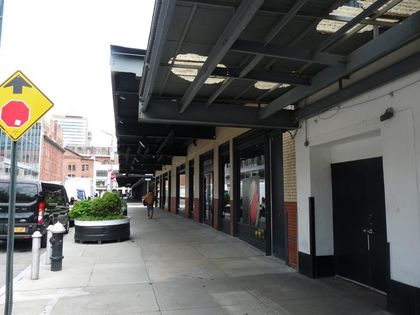 Tradition has preserved the old metal sidewalk sheds from the meatpacking days on Washington, Gansevoort, and other streets. This one, with several holes, is failing in its only job. 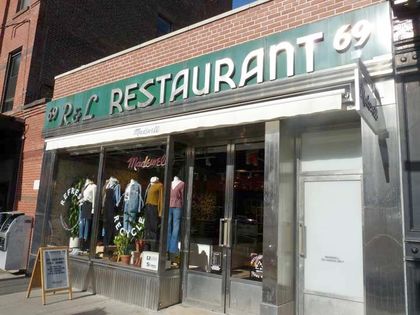 A number of restaurants occupied the space at 69 Gansevoort over the years, including the R&L Restaurant, here since at least 1939 and erected this modern facade by 1949. In the 1980s and 1990s, the space was occupied by Florent, one of my favorite spots in the city; restaurateur Florent Morellet took over the space in the 1980s, when the Meatpacking District was occupied by meat wholesalers and employees as well as gay and S&M clubs. Somehow, Morellet was able to create a space where both of those clienteles, as well as photographers wandering around with cameras and families with kids, could feel comfortable. In 2008, Florent shuttered due to the usual reason, a rent increase. A short-lived restaurant followed it and then, the present clothing retailer. In the 1990s, restaurants, boutiques and galleries, who were more willing to pay NYC’s exorbitant real estate prices, gradually moved in and took over. Gay clubs began moving in as early as 1970, with the Zoo followed by the Mineshaft. All, as well as straight hangouts like Hogs & Heifers, have bitten the dust. 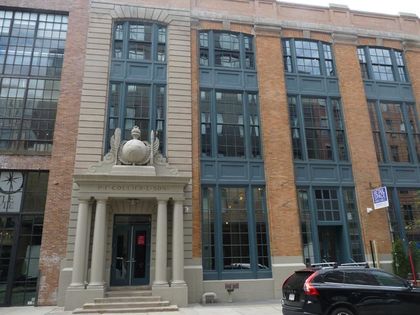 P. F. Collier was a Catholic seminarian who, instead of joining the priesthood, became a salesman for a Catholic book company headed by P.J. Kennedy, who turned him down on his idea to offer books on a subscription service. Collier went own to form his own company in 1875 and built it into the largest subscription publishing house in America. A magazine, Collier’s Weekly, appeared in 1888 (renamed from Once a Week in 1895) and published continuously until December 1956.

Collier’s main office was here on the far west side of Manhattan at 416 W. 13th Street (though it also had a large operation in Springfield, Ohio after the company was acquired by Crowell Publishing in the 1920s). The company’s symbol, a world globe accompanied by two wings and a torch, still blazed brightly on the club hoppers. e.e. cummings worked at Collier’s in 1917 for three months, answering mail.

I’ve always been fascinated by the depiction of a mysterious island off the coast of South America on the globe. The location of the island corresponds approximately to where the Falkland Islands, the British Overseas territory known chiefly for the Falklands War between Argentina and the United Kingdom in 1982, when the former asserted a claim on its neighboring islands; after Argentina occupied the Malvinas, as the islands are called there, in March 1982, it was ousted by the British after a two-month conflict. Though defeated, Argentina maintains a claim on the islands. The lone island on the Collier globe is much larger than the Falkland chain.

Other than P.F. Collier’s 1909 publication of Charles Darwin’s Voyage of The Beagle, which has a chapter on the Falklands, I can’t think of how or why the island would be presented so disproportionately here. Perhaps it’s a simple practical matter like hiding a screw, though I doubt that. The makers of the globe are long gone, and so the Mysterious Island shown here will remain a puzzler. There’s also a strange island off Africa’s west coast on the Collier globe that corresponds to Cape Verde (again bigger than it should be.) Why? You got me there.