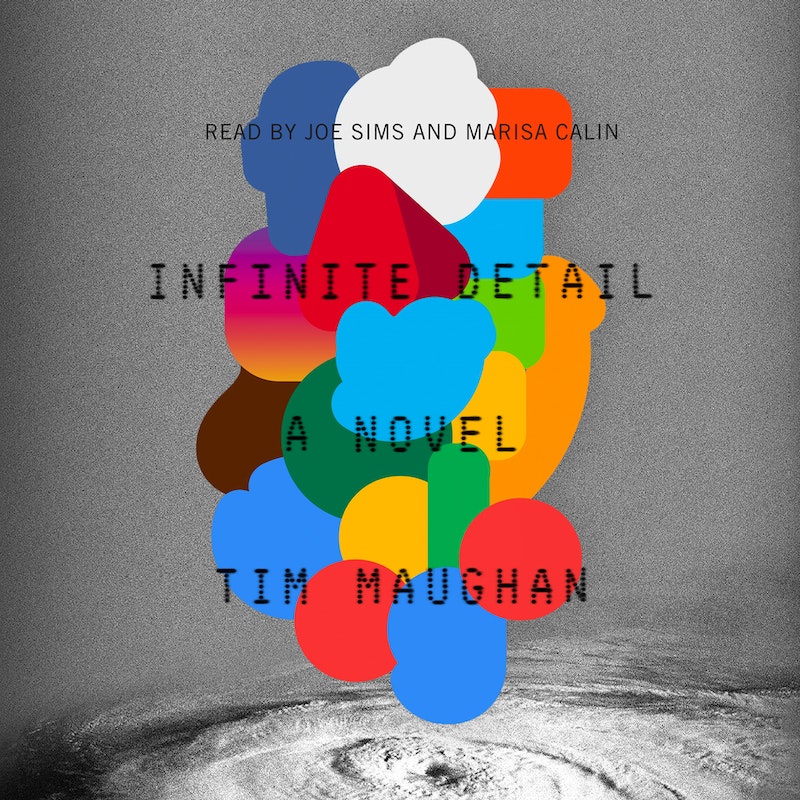 It’s tough times for science fiction writers. The pace of change keeps accelerating, tending toward a weird mix of the bleak and the improbable. Many writers have to tinker with their works-in-progress when current events overtake them. One solution: imagine a setting that takes place after a near-future catastrophe, writing a final line under the progress we think we see around us. Beat change at its own game.

That’s part of the plan in Tim Maughan’s novel Infinite Detail, which still aims to say something about the current wired world (drawing praise from terminally hip figures like novelist Warren Ellis). Maughan’s got more going on than that, though, and if his novel isn’t a complete success, it has points of interest.

The story follows a number of characters in and around a community in Bristol. At some point in the future, years after the Internet’s crashed, a young woman can see ghosts and draw their faces for grieving relatives. Another woman, older, comes to Bristol with a possible key to the mystery. Mixed with their stories is another narrative strand that takes place before the crash, leading up to the moment when the world changed.

It’s difficult to be more precise about the plot. Although the prose is sleek, although characters are always toting guns or getting involved in riots and protests, this isn’t a plot-centric novel. The characters are the heart of the book, and while that sounds like a good idea, the execution has its problems.

The novel’s language doesn’t change as the point of view does, and this flattens out the characters into a sameness that undercuts their individuality. The book’s good about following characters who have some kind of dramatic want, but those dramas don’t always cohere. The individual stories, the moment-to-moment desires of the characters, don’t all join up to create a vaster whole. The result is that Infinite Detail comes off something like a book of short stories that take place in a single setting.

The prose keeps things engaging, and the strong sense of what’s interesting in a character helps maintain a moment-to-moment interest. On the level of the sentence or the scene, this is a very readable book. Over the course of hundreds of pages, though, it’s a meander to nowhere in particular. Maughan avoids easy climaxes, and if that’s a strong instinct, overall the story never builds and never pays off.

The mystery of what caused the technological crash is resolved, more or less, but it’s not especially interesting. Wisely, the book avoids anything more than hints that some kind of Internet might be rebuilt. The point is the post-Internet world, and the characters that emerge from it. That’s a good approach to take—character shaped by environment, with both exploring themes about technology—but again, there are problems.

The explanation for the crash is inadequate. The post-crash world has no working land telephone lines, no over-the-air TV broadcasts, and even radio transmissions are usually described as “garbled.” Why these things were not rebuilt remains unclear. I was an adult before the Web existed; of course we lived like animals in those primitive days, but still I remember it as better than what Maughan imagines here.

There’s a reasonable argument that this world should be much worse: who’s making and distributing vaccines and other medications? Who’s watching the nuclear power plants? The book’s by and large not interested in those big-picture questions—consider the title—but its setting feels inconsistent, too downbeat in some ways and too livable in others.

There’s a sense in which the book’s an interesting kind of anti-cyberpunk. If William Gibson’s Neuromancer is the first work of fiction to imagine a world shaped by something like the Internet as we know it today, Infinite Detail reverses that, imagining the world minus the Internet. Where Gibson used a streamlined plot infused with violence and pulp energy to explore his future, Maughan avoids intricate plotting to focus on the smaller stories of people living their lives.

Certainly there’s a conscious critique of punk in the novel. The post-crash future is not pleasant, not freer, and that’s in part because none of the characters who wanted a revolution before the Internet went down really planned for what to do when the revolution came. Science fiction, of all genres, is most likely to be unimpressed with the slogan “no future,” and so here we see a convincing insistence that the apocalyptic moment that brings down the world we know isn’t the end of things but at most a beginning.

Politically, the book’s sharp without being specific—but it’s hard for a novel to be specific to the moment, given the schedules involved in book publishing. Maughan instead has a good sense for the dynamics of present and how they’ll feel in the near future (before the crash) along with a general sense of the importance of community and organization (which comes out after the crash). He writes about class difference and at least tries to deal with racial difference.

That understanding of politics is a strong suit of the book. It works with the basic approach: a story about connection, about people as the accumulated details of their lives. It’s an inversion of the approach of big data companies, perhaps, who gather thousands or millions of extremely fine grains of information: who gather infinite detail. Novelists must present character as a bigger picture than that, and so it is here, in a book that’s interesting conceptually, but ultimately not engaging.