There are very few plants here. Pecos seems Amazonian compared to this moonscape. 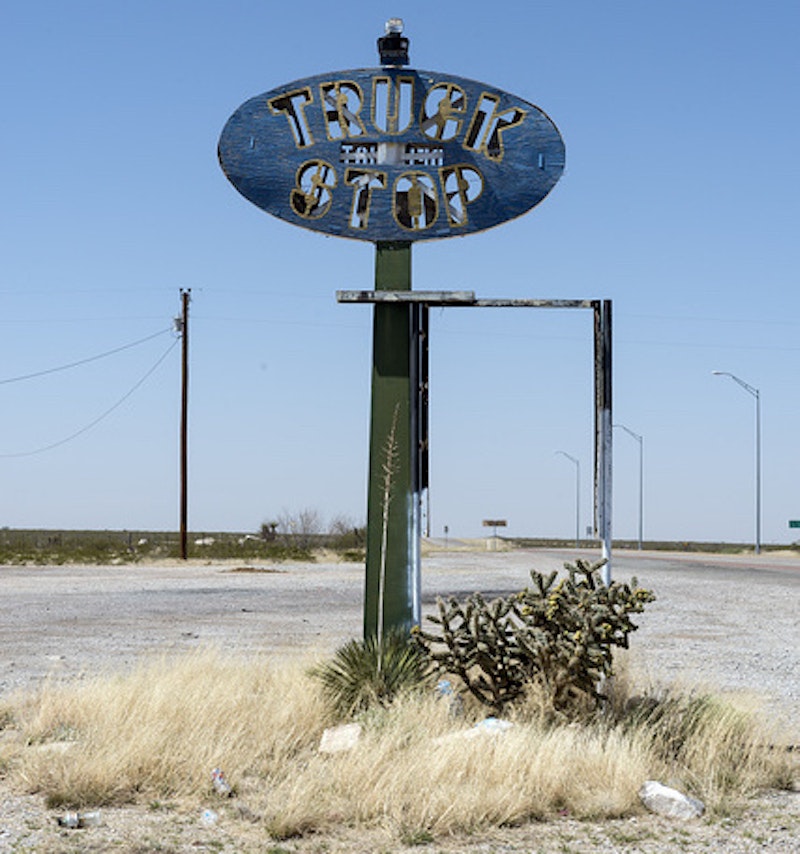 Five a.m., Dallas, TX: Silence permeates a suburban neighborhood on the outskirts of the city. A few minutes ago I left my friend's house and haven't had coffee or any food for hours. I'm having trouble staying awake in the bus shelter. It's just warm enough to sleep out here. I get up and pace up and down the block keeping an eye out for the local transit bus that'll take me to the Greyhound terminal downtown. The traffic on a nearby interstate is so sparse at this hour it can't even drown out the dead leaves that rattle along the sidewalk as they're swept away by the breeze.

The local bus finally picks me up. I catch a few catnaps on the way down to the terminal. When I arrive the journey feels like it’s ended before it even began. Stepping off the bus, I rub some sleep out of my eyes, then fish around in my pockets for a bus ticket. Then it's time to fill up the water bottle, buy some snacks, and line up with everyone else at the gate where there's a marquee reading "El Paso."

Nine a.m., Central Texas: I can't remember exactly when the bus left, but after getting settled in I fell asleep almost immediately. At around nine a.m. I wake up. We're still in a semi-urban section of central Texas. From this point on I slip in and out of sleep for 10 to 20 minutes at a time.

11 a.m., Odessa: The bus driver takes a break. There’s been a bunch of stops over the past few hours, but I'm not sure how many. Looking east I see what looks like a typical flat Texas landscape. There are suburbs and the sound of the highway drones in the background. It's not quite desolate but bears little resemblance to Manhattan. To the west there’s nothing. Just a horizon and more highway. It's windy and cold out here, yet the sun feels searing and oppressive. We're at the edge of a desert.

The pit stop’s over. Again, I'm not sure exactly how much time has passed. Groggily, we shuffle back on to the bus. A few new passengers have been picked up, including several young men who’ve just been released from jail. They're dressed in sweats and generic white tennis shoes. They carry see-through mesh bags containing a small batch of personal items. No matter where you are if you take a commercial bus or train in a remote area of the U.S. you'll see at least a few people who have just been freed from incarceration and they're always carrying the same stuff. If they get picked up from a store or a travel plaza the sack might also contain a pack of cigarettes, a bag of chips, maybe a candy bar or two.

Many U.S. jails hook up new parolees and ex-cons with a free bus or train ticket, basic personal items, and petty cash to tide them over until they're reunited with family and friends

Three p.m., Pecos and West Texas: I start to wonder if we're on a space ship instead of a bus. Endless clouds of dust swirl about, clearing only for brief moments. The bus trundles steadily with emergency flashers on. We're cloaked in heaving beige puffs that hover ghost-like over the interstate. Sometimes the dust swirls into the shape of miniature funnel clouds running across and along the side of the road. You could call them micro-sized "dust devils" and they do act a lot like the Tasmanian Devil character from those old Warner Brothers cartoons.

Speaking of Warner Brothers cartoons, that’s all I can think of as I catch a glimpse of the world beyond this mammoth dust storm. Rocks and dirt are dotted with cacti of various sizes, breeds, and textures, all stretching their prickly emerald appendages skyward. Clustered weeds push out of the soil in stubbly patterns stiff and crunchy with dry brown death. It's easy to imagine the Road Runner zipping around out there.

Surprisingly, the bus continues to maintain all scheduled stops, even in ramshackle towns that look as if they contain hardly more than 100 people. Each town shows the signs of abandonment more glaringly than the next the further we head west. New passengers get on the bus at nearly every stop, but there's no point in the trip when the bus is ever packed to capacity.

At each one of these stops people get off to smoke cigarettes. Even in a relentless dust storm on a bus trip that’s destined to run late, a small crowd of diehard smokers heads out into the melee. I’m among the few non-smokers on board. Even though I know I shouldn't, I gaze out of the tinted bus window and can't help but laugh as folks fumble in vain desperately trying to keep their cigarettes lit. In some cases, people can't even light the cigs due to the dust storm's monstrous vigor. How insane must it feel to inhale dense clouds of dirt and smoke all at one time? How could anyone actually enjoy that? Dust or no dust, the sun keeps pounding upon the Earth from every inch of the sky.

Sunset, West Texas Mountains and Van Horn: The storm clears just as the sun finally starts its slow glide down toward the horizon. There are more than a half dozen mountain ranges visible in any direction. These aren't lush mounds of greenery with sugary snowcaps, these look like mutant heaps of gravel. It's as if a giant got drunk and started randomly dumping a colossal wheel barrow all over the east side of the Rio Grande River. Dusk's pastel shades surround these mountains providing a soft counterpoint to the geological brutality of washed-out taupes, blues, and grays. There are very few plants here. Pecos seems Amazonian compared to this moonscape.

As we enter a new time zone the bus stops for an extended break in Van Horn, roughly two hours from El Paso. Here’s where our first driver ends his shift. There's an outer-space tapestry draped carefully across the sky's pinks and purples. The moon, the planets, and more stars than I've ever seen shine with a brilliance usually reserved for the darkest night, yet there's still daylight coloring the land.